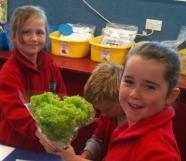 This case study features the first of three units in a year 3–4 programme focused on enhancing student understandings of technological systems. The second and third units are:

A dairy farm as a technological system

Through their work in the hydroponics unit, the students:

When planning for the following year, teachers of years 3–4 at Silverstream (South) Primary School decided that the focus for their Technology programme would be technological systems.

The programme would be facilitated by Phase 3 Beacon Practice teacher Andrea Robertson, formerly a pre-service lecturer in technology at Otago University College of Education.

Given that a hydroponic farm, Saddle View Nurseries, was near the school and that Andrea knew the owners, hydroponics was an obvious choice as a context for developing student understandings about technological systems.

It was clear that the students would need to encounter different kinds of technological systems to develop in-depth understanding, so two further units were also planned – with the contexts of electrical circuits and dairy farms.

To get a feel for the understandings that year 3–4 students should be developing, Andrea reread the explanatory papers on technological systems and revisited the Indicators of Progression and Progression Diagrams. Andrea then:

The teachers in the syndicate discussed the planned teaching activities in detail at their syndicate meetings:

Andrea decided not to begin the unit with a discussion on hydroponics because she thought this could be challenging for students who, in many cases, would have little understanding of the notion of a technological system. Instead, she began by asking, “What are systems?” The students’ responses included:

It’s when a sunflower gets heaps of insects.

A pipe or factory. Stuff runs through it – wires or water were travelling through.

A company that has heaps of people that keeps things going.

Andrea recorded the students’ questions, answers, and ideas in the “big book” to ensure that she could revisit discussions and track progress. The big book consists simply of A2 sheets stapled together into booklet format.

We spend five minutes every session recapping what has been taught, what we have learnt, and remembering with the children what we did in the previous lesson. The book is a great prompt for this. We usually do this 3–4 times a week. It helps children who have learning difficulties and those who have been absent for a particular lesson.

Using a variety of teaching activities, Andrea began to build on her students’ emerging understandings.

Photographs of everyday objects and video clips of Audri’s Rube Goldberg Monster Trap and Crème that Egg became the focus of small-group and class discussions.

The children also viewed and discussed a PowerPoint presentation showing humans inside machines as a way of depicting systems.

“The reaction of my own class was interesting. Even though I had explained that the depictions were not real, the children did not see them as humorous at all.”

I could see some of the children beginning to understand that there are lots of different systems, but I was still uncertain whether they had understood what a technological system was.

What is a technological system?

With the help of another PowerPoint presentation, the children were introduced to various simple systems and to the terms input, output, and transformation. The children then chose one of these systems, drew a sketch of it in their books, and labelled it. Many chose the popcorn maker, perhaps because it was the simplest to understand.

Andrea then introduced the notion of hydroponics as a technological system. Prior to this, the class had been learning about plants growing as part of a science unit. She says, “When I showed them photographs of hydroponics units, I found that not one child was at all aware that plants could grow without soil.” 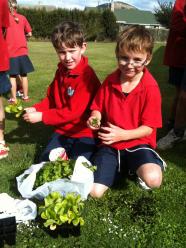 To accommodate the 130 children in the syndicate, the owners of the hydroponic farm generously took four separate groups in the same week. They showed the children the seedling nursery, the glasshouses containing the hydroponic systems, and the packaging section that dispatches nearly 700 lettuces three times each day.

The owners gave each group 14 lettuces to take back to school. The children went home that day eating lettuce (a novel experience for some) and, the next day, they made club sandwiches using tomato, ham and lettuce.

“All of them ate the sandwiches, and all of them put lots of lettuce in them!” says Andrea.

The children put all the new facts they had learnt onto sticky notes. Concepts such as nutrients and pH measures popped up for the first time.

The children were challenged to see if they could grow plants in autumn or winter using a hydroponic system. They were told at the farm that growing is more difficult in these seasons due to the reduced light.

A parent brought in a large number of empty 1.5 litre empty plastic drink bottles; a supply of coriander, parsley, and lettuce seedlings was also sourced.

The children watched The two-litre plastic bottle hydroponic wick system and read about hydroponic experiments for kids, online. They then all designed their own hydroponic system using the bottles, perlite, and a Chux cloth (for the wick). On advice from the hydroponic farm, they used just water for the first three days, and then added nutrients.

The plants thrived for three weeks but then the holidays intervened. When the children returned to school they found them in poor condition due to the heating used during a holiday programme. On reflection, Andrea thought it would be have been better to run this part of the programme earlier in the term, and maybe in spring when a greater variety of seedlings is available.

The children knew however from the field trip that lettuces could be grown successfully at this time of year. As they discussed the reasons for their own lack of success, failure became a learning experience. Coming on top of their earlier attempts (in a science unit) to grow plants in soil, they now knew that plants need the right conditions to grow.

Despite the organisation required for field trips, their real-life nature and the community connection make them a powerful learning experience. One child asked so many questions that Dale invited him to come and see him about a job when he finished school!

Starting with a broad view of technological systems, Andrea then focused on hydroponics as a particular technological system. She now plans to revisit the bigger picture before introducing a second context. This will involve revisiting the understandings explored and recorded in the “big book” and thinking about the broader context for systems again. Andrea plans to consolidate the learning related to level 1 Indicators of Progression for technological systems and to clarify that students have an understanding of all 3 indicators before moving on to the next level.

The second context is circuits, and the third (term 4) context is a dairy farm (term 3 is out as farmers are busy with calving). Meantime, the children were so enthralled with Audri’s Rube Goldberg machine that they are keen to design their own! 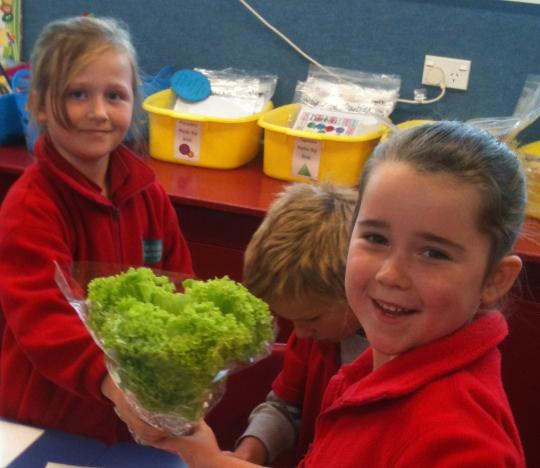