A dairy farm as a technological system 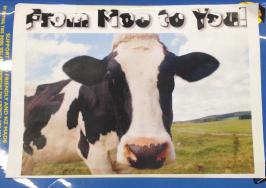 Their third focus was on a dairy farm as a technological system. Silverstream is located in Mosgiel with a large number of dairy farms in the surrounding district on the Taieri plains. Despite this, many students had never visited a dairy farm and were not familiar with the milking shed as a technological system. Initial questioning with the class showed that many students saw milk coming from a factory or the supermarket and had little understanding of cows.

Andrea drafted a unit plan and collected resources that could support the teaching.

Rosie’s World, a website developed by Dairy NZ, was a particularly useful find. Its content provided Andrea with resources for much of the teaching within the unit.

Other resources included, On the Farm: Milking Time (Lee Lamb) and Where Does Milk Come From? The Story of Milk (Sue Bramwell).

Andrea and the syndicate teachers organised a field trip to a dairy farm as part of the unit.

An end of year camp was planned to follow immediately after the unit. The camp included a visit to the Cadbury Chocolate factory in Dunedin. This was an ideal follow on because the majority of the milk from the Taieri plains dairy farms ends up being processed into chocolate products at this factory.

To start off the dairy farms unit, Andrea used the big books from the hydroponics and night-light units to review the understandings gained. She also revisited different types of systems, identifying the difference between technological systems and other systems.

A new book was created for this unit – From Moo to You! As the students progressed through the unit, Andrea used this big book to record and revisit their understandings. 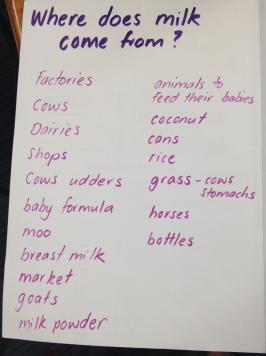 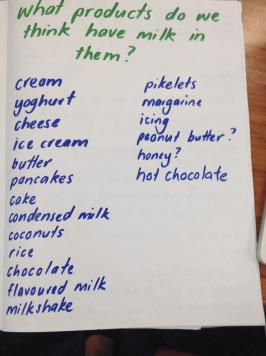 When Andrea was introducing the new technological systems focus of a dairy farm milking shed, one student argued that it was an organisational system as well as a technological system. The class had a lively discussion and all agreed that getting the cows to the shed and into the milking bail, milking the cows, and then sending them back to the paddock was in fact also an organisational system.

The students were seeing systems everywhere by the time we got to this third focus on the systems component. Not just technological systems but also social, organisational, and natural systems. When we visited the cowshed, this student made a point of showing me the gate with chains on it that was part of the organisational system to move the cows into the shed! 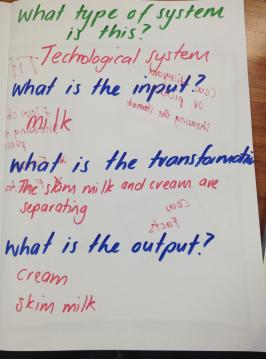 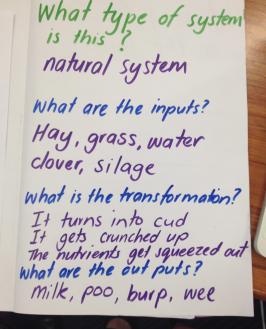 Rosie, the Dairy NZ Cowbassador, was introduced, and the students were shown Rosie’s blog on the website. Andrea could see that the students loved reading the blog each day and thought they would also enjoy contributing to it. She has this on the “next time” list.

The students learnt about the different breeds of cows in New Zealand by looking at the Dairy NZ video Family Tree Cowcam.

The students became experts at the different breeds and when we visited the farm, I overheard a student say to the farmer, "I see a lot of Jerseys here – any crossbreeds?" 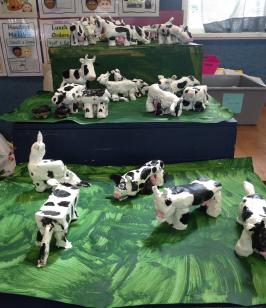 To develop the students’ understandings of the anatomy of a cow, they each made a clay cow. These were painted black and white and were displayed in pride of place in the classroom.

Andrea integrated the dairy farm focus with other learning areas during this time. She had sourced 10–25 books on dairy farms from the National library to help extend the students’ understandings. Later in the unit, the students noticed inaccuracies in the illustrations of McDonald’s farm in one of their books:

Oh look, Mrs Robertson! The cow’s udder is in the wrong place between the front legs!

As the students created the clay cows, they had conversations with each other and with Andrea about the different stages of a cow’s life and discussed the terms steers, bulls, heifers, and bobby calves.

Students learnt about the digestive system of a cow. This was also another opportunity to talk about how this was a natural system and how this differed from a social, organisational, and technological system.

Students recorded their understandings of the digestive system using a worksheet downloaded from the Lesson Builder section of the Dairy NZ site. 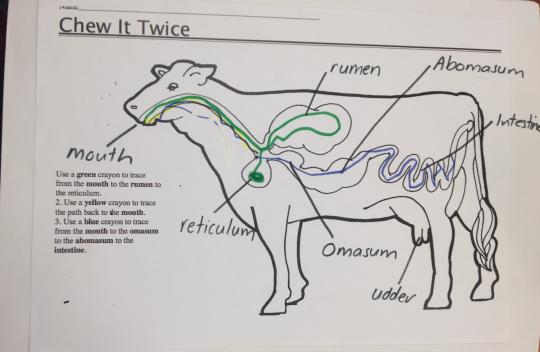 Following some reading and watching the Dairy NZ video From Glass to Grass, the students decided that the milking shed was a technological system.

They also explored the processing of milk by viewing About Milk. The students rapidly identified the milk-processing factory as a technological system.

Before the dairy farm visit, the class came up with questions that were emailed to the farmer. Viewing the video Robotic Milking Farms stimulated the students' interest in robotic farms, and they had many questions about this technology. The students also discussed the changes in technology in milking over time and the efficiencies that have been gained in the time it takes to milk a cow. Many hoped that they were in fact going to visit a robotic dairy farm.

Before the trip, the students were cautioned about health and safety. Keeping away from effluent pits and electric fences were discussed.

The farm visit showed the students that what they’d seen online in Rosie’s world was real. They experienced the smells and noises of the milking shed and could see that the milk spinning around in the glass as it came from the cow’s udder was in fact the milk they drink. 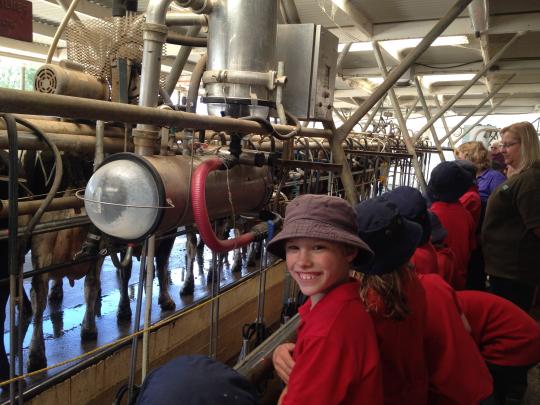 The farmer had left the computer industry to become a dairy farmer. With this background, he was able to answer many of the students’ questions about the robotic dairy farming that had so captivated them.

The students also enjoyed other activities on the Rosie’s World site, including Rosie's Calf Club. In this activity, students adopt a calf and are required to look after it. They receive rewards for looking after the calf and need to feed it, pat it, and put it in the shed if the weather is poor.

The Sequencing Game was helpful in determining the students' understandings of sequencing the details of a system.

To capture the students’ understandings, Andrea asked them to record a flow diagram of milk processing – from the cow to the supermarket. If they could describe specific technological systems using specialised language and symbol conventions, this could indicate that the students’ understandings were now moving towards the level 3 indicators of the technological systems component.

The flow diagram was quite an abstract concept for the students – they needed to be able to record sequencing in a logical order. But they generally did well with this, and some were even able to depict subsystems showing the processing of milk into further milk products once it left the cowshed.

Andrea rarely uses posters as a vehicle for recording students’ understandings because she thinks that it is too easy for posters to turn into a copying exercise that involves little critical thinking. However, because the students had not been asked to create a poster for two years, she felt that this would be engaging – but she was determined that the understandings to be shown on the poster would need to be outlined very clearly.

She used the big book to explain the format of the poster. The intent of the poster was that it could be used as a prop in a presentation to others on how milk is made.

Students were given four 30-minute sessions to complete their posters, and Andrea made it clear that the understandings shown in the poster were much more important than any presentation techniques. Any material to go on to the poster had to be planned out, prepared, and then placed onto the poster. Andrea asked the students to record on the poster in their own writing because she wanted to use this as an opportunity to integrate handwriting. 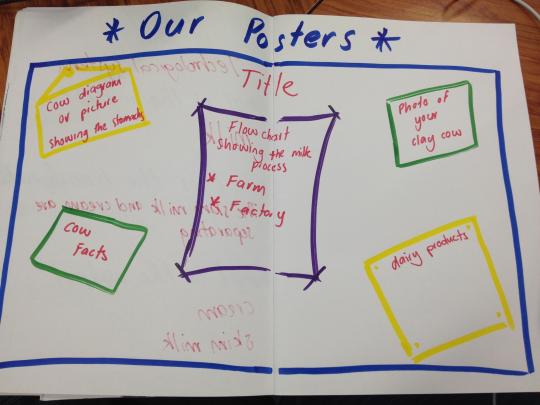 The students had many conversations about inputs, outputs, transformations, and systems as they produced their posters.

Andrea guided the students through the process of creating their posters, and at the same time extracted their understandings of technological systems. Next time, she plans to give the students instructions that are directly related to the indicators for their poster content, for example:

Andrea says the students showed “a very good understanding of technological systems.” She felt all of the students would be at level 2, with a lot heading into level 3. On their flow diagrams there was some use of specialised language. However, they had a lot of teacher support in producing the diagrams.

The opportunity to revisit and build and deepen understanding over the year and the hands-on activities (hydroponics and electronics) helped the students to explore and understand technological systems.

Andrea reports on the school trip to the Cadbury factory:

The Cadbury trip was a great way to round out the unit. The tour guide we had happened to know a lot about the dairy side of the operation and was amazing at giving stats and information about the way milk was used historically and in the present. The children loved the experience and the factory itself is full of technological systems and robotics so that was a whole other conversation for my class.

Play dough proved to be a very successful vehicle for identifying the understandings of the milking shed as a technological system from a special needs student in the class. Using play dough, the student made a tanker with a pipe that went into the dairy shed. He was able to describe the system as follows:

Next year the school-wide topic is challenges.

Andrea has ideas of integrating science and technology within a focus on zoo animals. Her initial thoughts for this include having the students make an interactive toy for a specific animal. Another idea she would like to explore is having students make a model zoo that suits the different animals. The unit could focus on technological practice and technological modelling. She plans to use a Connected article called “Sniff, Swag, Swipe” (2006, level 2). This article describes how students were asked to develop an enrichment activity for animals in the Hamilton Zoo. 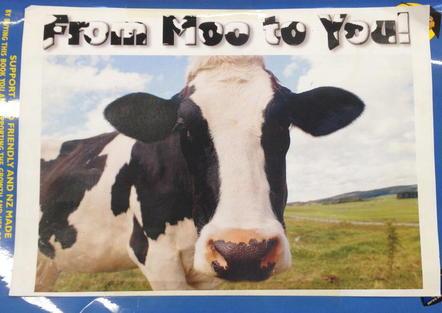