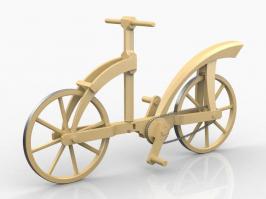 Christine introduced the one-term unit by revising the students’ generic technology knowledge –  what technology is, technological objects as distinct from natural objects – and discussing how concepts are the same, even though they might be working in different contexts. The class then looked in more depth at attributes, using the high-visibility vests some of the rural students wear to the centre as an example – identifying their physical and functional attributes.

The booklet included a page with images of a Leonardo da Vinci bike, with questions around the sorts of materials used to make it compared with a modern version and whether they thought it was fit for purpose. Throughout the term she explained to her students that she was trialling the booklet, and that it didn’t matter if they had gaps in their written work because as a class they had made good use of the time available.

Christine, in common with other technology teachers, gets a predictable response from students when they’re first asked ‘What is technology?’ Answers commonly include television, mobile phone, or computers. Christine wanted to help students more easily understand what technology is, and decided that she needed to divert their responses away from electronics and other more modern products. She decided that if students were directed to think about Māori technology in pre-European times, it would focus them more on technology as a concept rather than sidetracking them into thinking about the myriad of products available in the 21st century.

In preparation for a technological products trip to the South Otago Museum, Christine taught the students vocabulary relating to the performance properties of materials to help them discuss technological outcomes on display.

She gave them a worksheet containing photos of four objects in the museum. Students had to work out what each object was, what materials they thought it was made from, and why those materials would have been chosen. To help with the answers, Christine provided a list of words used to describe the performance properties of materials.

Students thought about the characteristics of technology component during their technological products museum trip. They each chose a product that has changed over time and considered its positive and negative effects on people and the environment, and how it has changed how people do things.