In this case study, four year 8 students at Northcross Intermediate, Auckland, designed and created a plant-monitoring and self-watering system to help keep the school’s indoor plants healthy and watered during the school holidays. 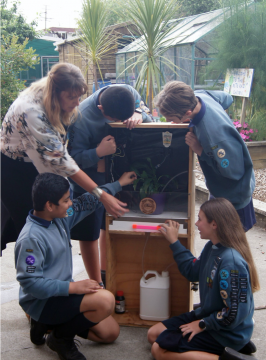 In this project, the students were working at Level 4 across all three technology strands and all five areas of the technology curriculum, with particular emphasis on Computational thinking and Designing and developing digital outcomes. The project also drew on the Living World and Physical World strands of the science curriculum.

In year 7, both Florence and Sohan had been involved in the school’s gardening club. Hayley Barrowcliffe, the biotechnology teacher, mentioned that she would like to have more indoor plants to “greenify” the technology block.

“Great idea,” said Florence. “But who’s going to water them in the holidays? They’ll die.”

“Maybe we could make a self-watering system,” suggested Sohan.

Hayley knew that self-watering systems were available on the commercial market. But she and Marc Rowlinson, the Head of Technology, saw that working out how to create one themselves would be a great learning opportunity for the students.

From the start, the students took ownership of the project, identified an authentic purpose, and asked key questions that drove the learning.

Hayley sent Florence and Sohan off to research the kinds of plants that would grow indoors and to find out how much water the plants would need.

The students realised that to prevent the plants drying out, they would need to monitor the moisture in the soil. They negotiated a budget and found an online tutorial that explained how to make a soil-moisture sensor using a simple (and inexpensive) microcontroller, some nails, and crocodile clips.

“We spent a lot of time researching the cheapest materials,” says Sohan. “But they also had to be durable and sustainable. We don’t want to destroy our world.”

Once the sensor was working, they realised there were still some problems.

“What do we do with the moisture readings?” they asked. “We need to connect the sensor with a water pump.” 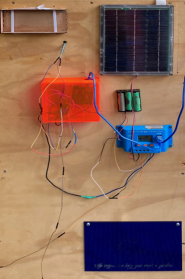 The students spent hours watching YouTube videos, working out how to make a simple water pump.

This is a strong example of an iterative design process that requires initiative and perseverance and reflects what typically happens in real-world projects.

Water pumps need power, so Florence and Sohan decided to use solar powered batteries that could be recharged through a solar panel.

They then had to figure out how to wire in the pump and write the code that would enable it to work with the moisture sensor. Again, they searched on Google for information and advice.

“It has all sorts of videos and hands-on lessons on how to build a wide variety of projects and how to code any of the devices they’re using.

The teachers were willing to step back and relinquish control, allowing the students to problem-solve and take ownership of the project.

I’d never done anything like this before. So Hayley and I have been happy to say, ‘We don’t know.’ Our role has been, ‘How’s it coming along? What do you want to find out?’ And we might help them search on Google for solutions – just directing them to the information that’s out there. But the students have been the drivers behind it.

We try to help them work out a logical pathway, a sequence of events. It’s helping them learn how to apply computational thinking.

And we’ve encouraged them to be persistent – not to be afraid to trial and fail. For example, we might see they were looking at the wrong bit of the code, or drilling holes in the wrong places, but we’d let them fail and try again, which certainly helped develop their debugging skills. And we couldn’t have hoped for a better response to those failures!”

This project shows that risk-taking and innovation go hand-in-hand. Testing and failing is part of technological modelling and helps to develop the key competencies (for example, self managing) and dispositions such as being persistent.

A new perspective and problem extended the project and its challenges. Collaboration between the two groups of students showed how different students bring different knowledge and skills to a project.

Eventually, Sohan and Florence had a moisture sensor connected to a working water pump. They were quite content with that until they started talking to Aharon and Samuel, who had been studying pH levels in their science extension class. They had found out that the pH levels in soil are important for the health of plants, and they realised that they could use their pH sensor with Sohan and Florence’s moisture sensor and water pump. So the two projects were combined.

Aharon was the main programmer for this part of the project. With help from his father, he wrote an app that would enable the data from both sensors to be visually displayed. This would let the students see how much water the plant was using and whether the soil’s pH levels were appropriate.

The teachers saw themselves as facilitators rather than "experts". They encouraged students to seek out expertise from their whānau and community.

Marc says, “We encourage the students to look for experts – for example, asking for help from a parent who is far more experienced in the field of programming than we are.”

“My dad helped us a lot,” says Aharon. “But I was beside him the whole time, seeing how he does it. He was teaching me along the way.” 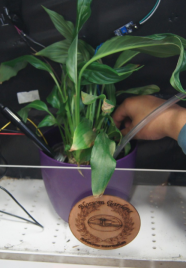 Putting it all together

The students needed to house the plant and provide space for all the components of the project.

At first they planned to build a wooden case themselves, using the tools in the materials technology area. But then they noticed a large wooden box in the corner of the classroom.

“It wasn’t being used for anything,” says Sohan, “so we asked if we could recycle it for our project.”

Students sometimes want to leap to the presentation aspects of a project before the design process has been fully worked through. This can present an opportunity to unpack their thinking. In this case, creating a logo was a means of celebrating the legacy these students hoped to leave for the school, and demonstrated their pride in their work and their sense of ownership.

The students were keen to design a logo that would visually represent the purpose of the project. The teachers acted as facilitators to help them understand when visual communication could best sit within the design process.

After much discussion, the students decided on “Blossom Garden” as the project’s name and created a logo for the finished structure. 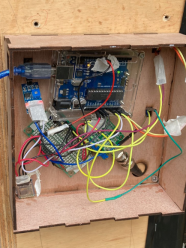 “We’ve been working on this for a year and a half,” says Florence. “It’s taken a lot more work than we thought. Now we’re just perfecting everything; making sure it all works really smoothly. We had a lot of help from the teachers. If we were struggling, Mr R might give us a hint or ask a relevant question. But he’d get us to work out how to do it.”

“Ms B gave us a technology cleaner,” says Aharon. “It cleans pH sensors and moisture sensors so we can use them again. Our first soil sensor actually got rusted up. But that’s just part of the process – finding out what works and what doesn’t.”

“We need to do more work on the batteries,” says Sohan. “The pump doesn’t last more than a day. It’s charged from the solar panel, but at the same time it’s using energy. So I’ve tried to recalibrate it in different ways, but with the same result. So we’ll need to improve on the battery storage.”

“And we’ll also need to improve on the wiring,” says Samuel. “We’ve got to neaten that up!”

“We could add another layer to the box,” says Aharon. “Then we could put soil into the box instead of having the plant in a pot, and the pump could work with more than one plant. And we could have mini-pipes coming from the main one, like a sprinkler.” 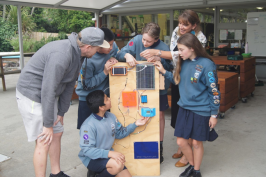 The teachers were willing to step back and hand control of the project over to the students. Risk-taking and “failing” were seen as part of a robust, iterative technological process.

“I’ve learnt so much along the way – how to design stuff. And the different materials you can use, like acrylic or wood, and which one’s best for doing what you want.” — Florence

“The biggest thing we’ve all learnt is that we work as a team, no matter whether things go wrong or right. It was sometimes harder because we argued about things. We had so many different ideas at once, and it got a bit muddled. So, we had to take time to work it out. “We want to share the credit equally. It’s about knowing each other’s strengths and weaknesses. And appreciating each others’ ideas.” — Florence and Sohan

Throughout the project, the students worked collaboratively, cooperating in planning and problem solving, respecting each other’s skills, and sharing their knowledge.

“I feel like we’ve made something that’ll be a legacy we can leave for the school.” — Samuel

"The teacher shouldn’t set a ceiling. Our expectation has been far exceeded by what they’ve produced. It might not look like what we had in mind in the beginning, but what’s important is the learning process that the kids have gone through. It has definitely been ‘less us and more them’, as Dr Gary Stager would say. And the individual growth – in confidence, social skills, leadership, friendships. That’s been just as exciting as the project itself.” — Marc

PDF version and video of this case study 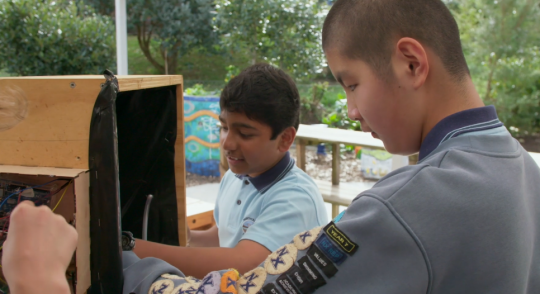 Four year 8 students from Northcross Intermediate collaborated, researched, and worked across the curriculum to design and create a plant-monitoring, self-watering system for keeping the school's indoor plants healthy.Read the case study - A self-watering plant system. ...

Exploring honeybees' impact, year 7 students at St Joseph’s School (Timaru), established and shared with others lasting ways to keep bees flourishing, throughout the school and the planet.Read the case study - Looking after bees....

Working in teams, year 8 students at Greenmeadows Intermediate developed animated videos for Six60’s “Pepeha”. Together, they planned, evaluated, problem-solved, and learned from others’ points of view. Read the case study - Digital animations....