Technological practice and characteristics of technology: Producing a newspaper

How can I include learning about technological practice and characteristics of technology in a cross-curricular programme of learning that has a class newspaper as the outcome? 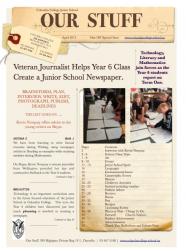 Dorothy Hutton of Columba College found that creating a class newspaper gave her students opportunities to:

Dorothy takes every possible opportunity to include technology learning in cross-curricular programmes of learning. A recent programme of learning that involved producing a class newspaper presented an ideal opportunity to grow her students’ understanding of planning for practice and characteristics of technology.

This snapshot is an example of local curriculum design and learning progression in the technology learning area. Select the headings below to read more.

Teaching technology within the newspaper unit

Building on previous learning in the technology learning area

Having taught the same group of students technology the previous year, Dorothy knew which of the level 2 technology components these students had already covered, although she did have five new students to be brought up to speed.

The class recorded new understandings and key points from class discussions in the technology book. Dorothy had used this strategy before and had found it an effective way of recording developments and sharing them with parents (each student has a turn taking the book home).

For more information about how Dorothy has used a technology book, see the teaching snapshot Exploring technology with junior students.

Kevin Norquay (a national content editor) was contacted to enlist his support as an expert stakeholder. Kevin was happy to assist with the project and to provide feedback on the students’ articles. He agreed to a Skype interview with the students – in which he would answer questions about his career as a journalist.

Ian MacDonald, a semi-retired lecturer in statistics at Otago University, was also identified as an expert stakeholder to support the students to use online digital tools to graph survey results for content involving statistics. He readily agreed.

Students began by thinking about methods of written communication before they started to create their own. Dorothy asked them to consider and bring along any resources from home that would be helpful for oral language each week. This got them looking at written resources everyday. The students talked about what was in them.

The students were encouraged to choose resources that contained articles about culture and discrimination to integrate with their current health unit about discrimination in different countries.

As part of developing their comprehension strategies, they also had to summarise the articles they brought to class.

“What are we learning today?” (WALTS) were recorded for teaching and learning sessions to clarify the focus of each session.

For Dorothy, the key to ensuring that all three strands of the technology learning area are covered in years 1–6 is to look at units of work and integrate the components that fit naturally. Planning is such an integral part of newspaper production that it provided an obvious context in which to grow understandings about planning for practice:

I could see straight away that the newspaper was going to take a lot of organisation by the students. It was going to take a team effort and accountability, including a big paper trail. We agreed to target level 3 of the planning for practice component for this unit. The students started by cutting up a newspaper and analysing the various sections. They then brainstormed what they wanted to include in their own newspaper. The articles the students selected were reassembled into a display paper to use as a reference and guide throughout term 1.

In pairs, the students interviewed the seven junior school teachers to see what they had on that term that could provide material for a story, For example, sporting or cultural activities, trips, events, or projects. The students then wrote up a plan for articles to cover all of the activities. Dorothy ensured that the workload was evenly spread across the class.

The students used a planning template to schedule their writing, entering dates, times, and required resources. The same information was entered on a larger planner on the classroom wall – where work was highlighted when completed.

One student took on the role of photographer and fellow students were able to book him for events.

Dorothy initially used a template to support the students with their writing, but she found that the results were formulaic and wooden. So she asked Kevin Norquay to provide feedback on the stories. He encouraged the students to capture interesting facts that would entice the reader, rather than simply retelling the event.

The students’ writing style very obviously improved following this advice, as did their interviewing and questioning techniques. Following Kevin’s advice, they asked fewer factual questions and focused instead on finding out what was likely to interest the reader: “Did anything funny happen in the class, anything interesting?”

To further increase the students’ awareness of style, Dorothy had them analyse interesting articles to identify what it was about the writing that made the articles interesting.

Reporters could often be seen sitting on the grass or the decks – interviewing fellow students for their next article and taking notes. Teachers of other classes were very supportive and willing to accommodate the students.

In their Skype interview with Kevin, the students asked him questions about his life working for the newspaper, different types of news, number of words, getting things in on time, last-minute reporting, how different articles are given priority in a newspaper, and how to train to be a reporter.

By this stage, the classroom was buzzing like a real news room.

Every day things were happening. For example, a reporter might go and see the teacher in room 4 to find out when her class was going on their trip and to ask if they wanted photographs taken. Trips might be postponed and a reporter would find that they had to do two pieces of writing in one week. The students would say – it’s just like Kevin!

Newspapers often feature statistical content once students were aware of this, they asked that the class newspaper include statistics.

The students chose what kind of statistics they would like to feature and decided how they would collect them. They included:

Once the statistics had been collected, Ian McDonald, an expert stakeholder, showed the students how to digitally create suitable graphs for the different datasets.

Crosswords, word searches, and other activities and competitions were also devised for the newspaper. The students based all of the questions on the junior school’s current living world science unit, ensuring there were activities appropriate for the context each class studied, for example, frogs and butterflies. A “guess the teacher” competition was created using photos of the junior school teachers, teacher aides, librarian, and principal when they were 5–9 years old. This competition proved a very popular activity.

The student checking the entries as they came in had a lot of fun handing back forms and fending off pressure to reveal the answers. The principal even came into class to check whether anyone had correctly guessed the subjects of all the photographs!

Collating everything for the finished publication was also a class effort. A3 sheets on the classroom floor represented each section. The students assigned every piece of finished writing to one of the sections. Then they reached agreement on the order in which the pieces would appear. Finally, they wrote the contents page.

Dorothy later realised that modelling the newspaper in this way could have been used as an opportunity for discussing functional modelling.

Students were thinking and talking about the layout of the paper and moving articles around while they explained the decisions and negotiated together – which is a clear example of functional modelling.

The students sure knew about planning for practice by the end of the project – they were very busy planning interviews, making checklists, and ticking off tasks as they were completed so that they could capture breaking stories and meet the end-of-term deadline.

Most students demonstrated that they were at either level 2 or 3 in terms of planning for practice. A number of students were at level 4.

These students were extremely capable, with well-above-average ability in literacy. So they were able to cope with many tasks independently, and … seek their own subjects to research and write about.

Those operating at level 4 could review and revise their time management at set points to ensure outcome completion. Three students with specific learning needs were working at level 1.

Literacy impacts on students’ understanding and achievement across all curriculum learning areas. Literacy becomes even more of an issue as the students get older because the literacy demands of the curriculum content increase.

The class discussed literacy and the impact of changing technologies on communications, for example, more people getting the news digitally, and fewer getting it physically via newspapers. Dorothy recorded these class discussions in the class technology book.

The focus of these discussions was the level 2 indicator: In the end, we printed several copies for the class and each student was able to take a copy home for several days to share with their parents. When Kevin received his copy, he sent a lovely email in which he congratulated the students on their achievement. All this positivity sits well with our school values and the key competencies of excellence, managing self, and relating to others. The newspaper turned out to be a fantastic project for building self-esteem.

The students found working on the class newspaper a “real” experience. It made them very aware of the work and the pressures that would be involved in producing a commercial newspaper.

The next time Dorothy’s class creates a newspaper, she will include a letter to the editor section, as this will allow her to embed letter writing in the unit. And now that she is confident about the process, she may also include brief development – either as a reflective task or something to co-construct with the students. She can also see value in the students keeping a better record of the journey:

The next time I will encourage the students to annotate changes to their planning and to maintain a reflective journal. This will help them notice and remember what they have learnt. While they did all write reflections at the end of this unit, some of which were very insightful, having journal entries to refer back to would have made the task that much easier.