Technology and the key competencies 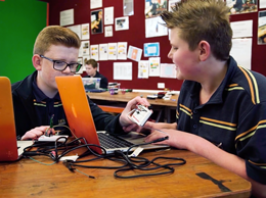 As described in The New Zealand Curriculum, the key competencies are "the capabilities people need in order to live, learn, work, and contribute as active members of their communities". Schools are expected to embed their development into all aspects of the local curriculum.

The five key competencies are: 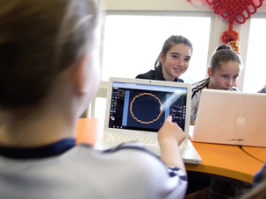 Key competencies are necessary for students to develop broad technological knowledge, practices, and dispositions that will equip them to participate in society as informed citizens.

The key competencies can only be developed or demonstrated in contexts. This is why play-based or project-based learning is so important to the development of learners at all ages and stages.

Technology learning is structured around five contexts, the technological areas:

Within these five contexts, the achievement objectives and progress outcomes describe the desired learning as students develop technological outcomes "in authentic contexts and taking account of end-users”.

Weaving a coherent curriculum: How the idea of 'capabilities' can help (Dr Rosemary Hipkins, 2017) describes the relationship between capabilities, learning in contexts, and rich, powerful learning.

The following sections suggest some of the ways in which the key competencies can guide classroom actions and teaching choices.

Critical and creative thinking are vital in technology, as is a high level of awareness about the thinking that underpins any decision. Being able to step back from situations and answer questions demands increasingly sophisticated thinking skills. Questions such as:

Across all three strands of technology, it is students’ thinking skills that enable them to make informed decisions based on ethical as well as functional grounds, that underpin their understanding of fitness for purpose, and that enable the fitness of an outcome for any specific purpose to be assessed.

Opportunities for enhancing the development of thinking present themselves when:

A monitoring system for the Orokonui Ecosanctuary – year 13 student William Satterthwaite had to solve multiple problems including understanding the socio-cultural needs of the main stakeholders, the volunteers.

Exploring food packaging – year 6 students at Columbia College explored multiple materials and packaging including tītī/muttonbird storage. They started to think about whether the materials were technically feasible and socially acceptable.

Given its body of specialised language, technology provides numerous opportunities to develop students’ capabilities in the use of language, symbols, and texts. These capabilities are reinforced by informed technological practice, where experimentation, analysis, testing and final evaluation require students to interpret specialised language, symbols, and texts and to use such language to explain and justify their thinking.

Because technology draws knowledge and skills from across a range of learning areas and disciplines, students come to appreciate how and why language, symbols, and texts and what is thought of as "accepted knowledge and skills" differ across disciplines and contexts. Recognising and understanding these differences enhances students’ ability to interpret and use language, symbols, and texts in all areas of their own lives.

A recipe book: Linking technology and literacy – years 7 and 8 students at Waitaki Valley School learnt about the language and formatting of recipes in food technology.

When undertaking technological practice, whether individually or in a group, students need to develop self-management skills to plan ahead and use resources efficiently. By engaging in practice that takes account of wider social and physical environmental factors, students develop their sense of self. They also learn to recognise how they can manage themselves across different life situations, both inside and outside formal education contexts.

In the preparation section, you will see the teacher discussed the key competencies, including managing self, with the years 5-6 class.The teacher created a graphic organiser in which students identified how they would demonstrate the competencies during the tie-dyeing.

Technology is intervention by design.

Technological practice is about how students create outcomes (products and/or systems) that meet an authentic need for another person, group of people, other living things, or a place.

When students follow a given brief (levels 1-2/3) or develop their own brief (levels 3/4 onwards), they do this by understanding the need from different perspectives. These are the stakeholders or end-user relationships. They are central to technology education.

Students relate to others and gain new knowledge when they design and develop concepts towards an outcome. This knowledge could be from experts, industry, or other technologists. Technology students gain the confidence and ability to work across a wide range of groups and circumstances by collaborating and, at times, managing conflicts.

To understand how students are able to relate to others observe how students do this during technological practice. How do they manage and use these relationships to grow their capabilities?

This video describes students working with community experts, such as an electrician and scaffolders, to arrange their installation.

Hamish: Our project for this year was based on the context, which we used to develop a brief, and the context that we had was to get the school’s energy consumption to drop by a certain percentage. And at this stage of the start of our project, it dropped by ...

Marco: And that’s over three years.

Marco: And the goal is forty percent over five years.

Hamish: And so based on that context, we were given a bunch of renewable energy technologies and with that there was the option of solar water heating, wind turbine, a micro-hydro system, and then lastly was the solar PV panels, which we both chose.

Our deadline was more or less the year eight day for our school. Our principal wanted us to have the solar panels up so that everyone could see them, so that was also incorporated into our consideration for where we would place the PV system because they had to be easily seen, easily noticeable, and also they had to maximise the sun that they could get. So that is why we put them on to the Special Ed Centre building.

Marco: So we couldn’t have done this without the technical assistance of Mr Dobbin, Stuart from Ark Electrical, who was the electrician on the day.

Hamish: From Horizon, which because our application was so detailed, it got approved overnight. So because we were working above, it was ...

Hamish: Two metres. Because we were working above that, which even though the roof didn’t look like it was much of a slope once we got up there, we found out it was. We had to have either harnessing or ...

Marco: Some sort of edge protection.

Marco: So it goes like scaffolding along the guttering.

Marco: We’ve got that here.

Hamish: Yep, so what we did was we worked with local businesses, and we managed to get Davie Painters – because they were already working in the school, we worked along side the caretaker and he organised for Davie Painters to just leave their scaffolding up for us so that we could work on the roof and be safe about it.

Marco: We could put all the panels on, run all the cables, everything. Just not go into the switchboard and do that.

Marco: We just couldn't make the final click. What we needed ...

Hamish: Because that had to be by a certified electrician.

Marco: Out of the contexts for the course it was.

Marco: It's sustainability through practice and it has to be able to be monitorable. What we had to do was make a website.

Marco: What it does is it tells us exactly how much we producing, how much we’ve saved, how much it's making right now. It's continual, it updates every ten minutes and it sends emails to the school weekly.

Hamish: Our teacher Mr Dobbin is just so passionate about, 'cause his house is completely sustainable almost. He has power bills we he gets paid because he sells back.

Marco: To the grid.

Hamish: His extra energy to the grid, so most of his power bills are income for him.

Marco: Because that's the way the world's going. It's going sustainable.

Students undertake technology education in collaboration with others. Ethical and effective design is characterised by innovation and adaptation. This is at the heart of technological practice.

Student design outcomes are informed by their developing capabilities in critical and creative thinking whilst using a range of design processes.

Creativity and critical thinking can require students to contribute to others’ design processes and to receive contributions from others. Design is not something that happens in isolation.

Students' designs, influenced by participating and contributing, result in rich and innovative outcomes. Students must contribute to their designs, and participate in the design activities of others, so that the outcomes developed are fit for purpose.

Pay it forward: Community projects in year 10 textiles – year 10 students at Gisborne Girls' High School worked collaboratively in groups and with community organisations to identify and create a textile product to meet a need.

Should you be assessing the key competencies? 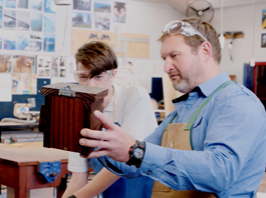 Dr Rosemary Hipkins' article Assessing key competencies: Why would we? How could we? discusses assessment and the key competencies, framed within wider questions about the purposes and outcomes of schooling and education.

Start by considering some recent lessons:

Your answers will help you look at how you view competencies and capabilities.

Other questions to consider:

Three broad purposes for assessing any learning are:

The first two will be most familiar. Assessment strategies that aim to foster lifelong learning are becoming more important.

Students use complex design processes when learning in a technology context. These can look very different from student to student. A strength of the technology learning area is that the technology process and its outcomes provide rich assessment opportunities.

Look for how students are demonstrating the key competencies individually in their technological practice. Assessment needs to be as flexible as the students' approaches to their technology learning.

Technology learning is about action – learning by doing – in a conceptual framework of competencies and capabilities (using and applying skills and knowledge). This gives the opportunity to consider new types of learning outcomes.