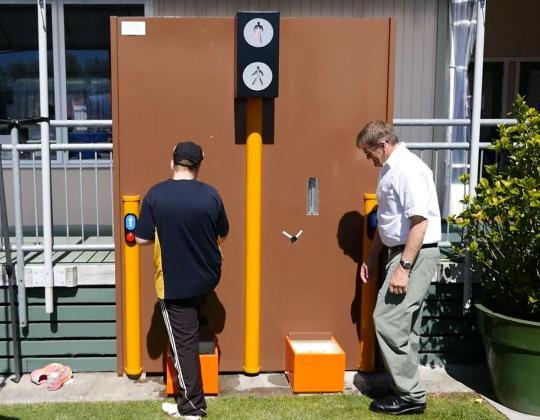 This tells the opponent to push their button – which results in both traffic lights turning green, indicating game on.

Then both players pump the pad in the water-filled box with one foot. When a player fills their reservoir to the top, their opponent is sprayed with water. 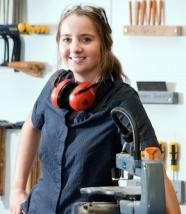 Briar set the bar pretty high right from the beginning.

She identified a rich context – helping those in need. Then she presented to several community groups in the Christmas holidays. She wanted to identify an issue that:

Briar presented to a retirement village, a shopping plaza, a high school learning centre, and a school for students with additional needs.

After reflecting on the presentations and the feedback, she selected the school for students with additional learning needs.

Right from the beginning I really liked the students. They were quite cool and their issue addressed everything I needed. I wanted to make something for them. I knew one of the girls too, from my primary school.

One of the teaching staff lent Briar a text on education and special needs. This provided her with an introduction to what she would need to consider when developing the activity.

The activity needed to be engaging and exciting to use, to encourage social interaction, and be educational and safe. Water play was identified as a favourite activity.

Another initial specification based on student learning strategies was a focus on cause and effect in the game – “If you push this button, the effect is ….” The students’ teachers often focused on understanding cause and effect to encourage students’ independence.

Teachers wanted an activity that would enhance the students’ ability to manage every day life. They also pointed out that activities that used the five senses were engaging. 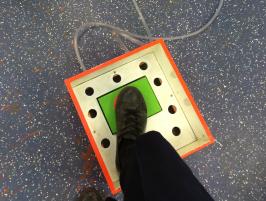 Briar faced a number of challenges in her project.

Identifying the best mechanism to pump the water to the reservoir required extensive functional modelling and testing.

Briar’s first design was a hand pump that students pushed with their hand to pump the water up the reservoir.

However, Briar found that students preferred to stand on the button rather than pump it with their hand because the hand pump required quite a bit of strength. 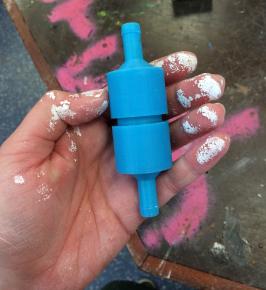 The students were unable to pump the water fast enough to keep the water under enough pressure to counter backflow. Briar needed to design a one-way valve to overcome the problem of water coming back down from the reservoir.

Because the hose connecting with the valve was not a standard size, Briar used a 3D printer to manufacture the valve.

The first valve she made worked, but it broke easily when someone accidentally stood on it. This brought about concerns about its durability and strength.

Earlier in the year, Briar had attended an Engineering Expo in Auckland and had seen a demonstration of manufacturing a bionic hand. They had exposed the hand to Acetone vapour, which increased the strength of the hand by 300%.

Briar decided to use this process for her valve. She had to adhere to health and safety procedures very strictly when carrying out the process, because fumes inhaled from boiling acetone can be toxic. 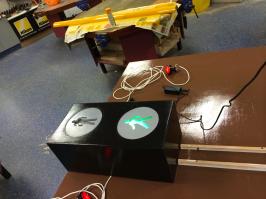 The traffic lights were cut out on a CNC router. The school had just purchased their router earlier in the year, so Briar’s teacher said that this was one of those situations in which the student and teacher were learning together.

Briar’s choice of planning tools were paper based – a wall calendar, a diary, and planning sheets. 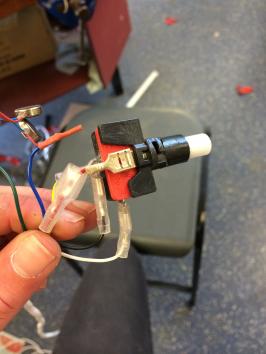 When the daily tasks planned were incomplete, she stayed on after school until they were done.

Extensive stakeholder interaction with the students was required to ensure that the outcome was fit for purpose in its broadest sense. This often had to take place out of school hours.

The project also required electronic systems. Dean Welton of Kiatronics was a mentor to Briar for this aspect of the project.

Briar outsourced the electronics for the traffic lights system and the vibrating buttons, and had these made to her specifications.

She included the use of recycled parts as much as possible to address fitness for purpose in its broadest sense. The buzzer was created from recycled mobile phone parts. She ensured that she organised the parts she needed to produce around these components early in the year so that Dean had plenty of time to fit this work in with his regular work commitments.

She created the hydrodynamic system for the water circuit herself.

This project is a strong example of a student carrying out ethical testing to ensure fitness for purpose in its broadest sense.

Briar insisted that a wide range of students were involved in the testing and trialling at each stage. Teacher observation of student responses also contributed to feedback.

Briar was determined that the activity would be available and would appeal to all student ages. The students had clear ideas about colours and their strength to push buttons. Multiple feet sizes were used to test the foot-button mechanism.

The students and the associate principal (AP) of the special school were very pleased with the activity, with the AP praising Briar's approach:

I have always found you to be very professional and interactive in the consultation process and a great listener. The final product exceeded my expectations ... I was impressed with how you considered the sensory aspects of this activity to allow many students to benefit from interacting with this activity board.

Briar's technology teacher notes that Briar's level 1 work was assessed at level 2 and indicated a potential scholarship candidate. At the end of year 11, she approached her teacher and asked what she needed to do to secure scholarship. Briar achieved scholarship in year 12. 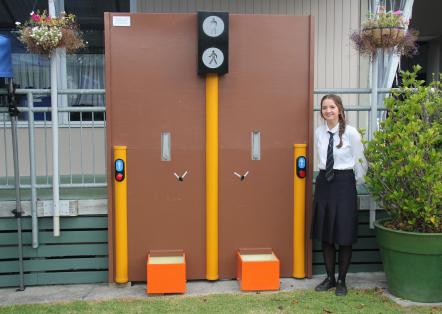