This case study can be used to develop understandings about technological systems at levels 6 and 7. It provides examples that relate closely to these achievement objectives:

Equally, this case study illustrates aspects of technological systems that are relevant at lower levels of the technology learning area. It could provide a useful starting point for class discussion. 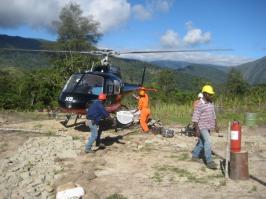 GAMA ProjEX teams often work in remote jungle areas. So Barry and his teammates saw the opportunity to design a modular camp system that:

GAMA Projex could see the advantages of such a system, so Barry was appointed to develop the concept and drive the project.

Barry’s idea was to use ex-military tents to house the various functions of the camp. He researched what was available and determined suitable sizes.

Our initial thought was to be pretty low-tech and cheap as we didn’t know if tents would work. No one had used them for this purpose before.

Gama ProjEx bought a number of second-hand military tents. They were 6 m wide and extendable in length, with multiple 2.4 m long modules. Barry set them up in a paddock on his Gisborne farm. This was quick and easy because they had been designed for military use.

Each tent came with a liner. But because temperatures in the lowlands of PNG can be as high as 40°C, and humidity as high as 98 percent, Barry got Covermaker to make a white tarpaulin fly that would sit 300 mm above the roof and reflect the sun. This three-layer system – lining, tent, and fly – proved to have good thermal integrity, ensuring that the tents could be kept cool with the aid of air conditioning when they were being used as offices. The white liners also helped make the interior light, which was important for the offices.

For accommodation, Barry planned for individual tents within larger ones. To test the feasibility of the idea, Barry bought a smaller tent and carried out some functional modelling. Two 2.4 x 2.4 m tents fitted perfectly inside each large tent, leaving a walkway between.

Each accommodation tent has a bed, a table lamp, a table fan, and a power multi board to charge phones and other personal electronic devices.

Air conditioning is not needed in these tents because evening temperatures are pleasant.

Using a tent set up at home, Barry designed and modelled a kitchen unit on a floor of 21 mm plywood, determining the most suitable placement of appliances such as an oven, bain-marie, and icemaker.

Barry designed a range of flat-packable modular furniture for the camps: beds, tables, benches, bench seats (for the mess), and office tables and shelves. Each item is assembled to suit from interchangeable tops and legs of various sizes.

Barry’s wife purchased much of the domestic equipment locally such as kitchen equipment and bedside lights.

Barry was keen to replace the time-consuming wiring and cabling process with an efficient electrical distribution system that was used in other camps in PNG. The centrepiece of his plan was a series of distribution boards, the first rated to 120 amps, then split down to 63 amps, then split again to 32 amps. 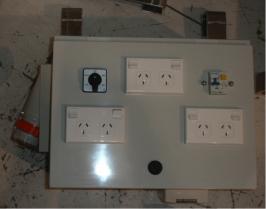 C board, 30 amp (all boards have overload and RCD protection)

I discussed the boards idea with an electrician friend, and once we had sorted the design, took it to Swanson Electrical in Gisborne. They had connections with Bremca in Tauranga, who made the boards for us.

Estimating the required capacity is a matter of calculating the total draw (amperage) of all camp appliances and then adding 20 percent for a safety margin and possible future needs.

Power output, noise level, and weight are the factors that normally determine the suitability (fitness-for-purpose) of a generator for a particular situation.

In city environments, where generators are typically used to provide backup for office blocks or utilities, noise is an issue, but in a remote camp, where a generator can be placed up to 50 metres from the accommodation, it is not. 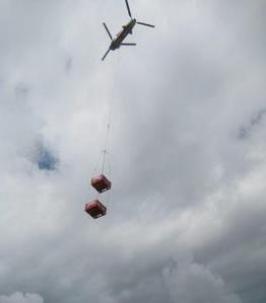 Conversely, weight is not usually a major consideration in city environments because heavy trucks and cranes can easily move a generator into position. But in remote camps, everything needs to be light enough to be carried in by helicopter.

Sometimes we have road access and can transport resources in a shipping container. On other occasions, we use one of the many rivers. We move things as far upriver as possible by barge and then flick them to the camp by light helicopter, 600–800 kg at a time.

So when Barry went shopping for generators, weight and capacity were the two key considerations. Suitable generators proved hard to source.

For toilets and showers, the solution was to retrofit commercially available portable units:

The toilets are porcelain, which is easier to clean than plastic, and hence more hygienic. The showers have a tray and shower rose. We provide one toilet and shower per 10 workers. Both are modular, so we can quickly pick them up and move them.

Waste goes into a series of small domestic septic tanks.

Barry packed the components for his first camp into containers and shipped them to Port Moresby. From here, they went upriver on barges before being off-loaded and transported to their final destination near the border with Indonesia. Barry and colleague Mick were already at the site. 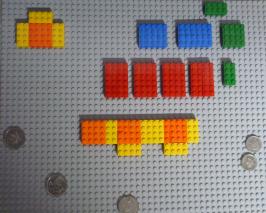 With the trucks and containers due the next day, we didn’t have a lot of time to work out where everything should go. And once the components were in place, we wouldn’t have the machinery to move them around.

So we modelled the site with Lego, which we had brought to PNG for the purpose. Different coloured blocks represented the containers and the tents. We modelled where the water bladders and pipes would go, and where we would put the generator and cables. Because the structures were so fast to erect, we slept in comfort on site that first night, with basic cooking facilities – which was a first for the industry. 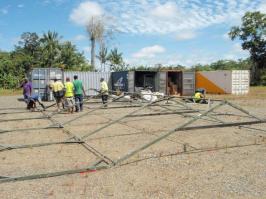 With the model as their guide, they pegged out the camp.

Twelve local men were engaged to help with the setting up. Barry provided health and safety training, and workers were issued with safety equipment before starting the build. Given the very high temperatures and humidity, they made a priority of getting the tents up to provide shade.

From years of living in camps, Barry and Mick had a good knowledge of plumbing, but they had also trained a local man to be the resident plumbing expert. A local electrician was also employed, mainly to connect up the whiteware.

Within 10 days, the camp was ready to go, complete with running hot water, toilets, and electricity in all structures – an unheard-of achievement.

The first generators, purchased in Papua New Guinea (to allow for ready servicing), initially broke down a couple of times a week.

With 20 to 30 people working on computers, cooking, and cleaning, this was unacceptable.

Modern generators have CPUs that need to be connected to a computer for diagnostic and troubleshooting purposes. The CPUs are essentially “black boxes”, so campsite engineers found themselves unable to service them effectively without the correct diagnostics software. After three months of trying, they shipped them back to Port Moresby, where the issues were resolved, enabling the team to finally establish a reliable electrical system.

Each camp normally has three generators. Every 10 days, they swap generators and carry out maintenance on the one that has just been decommissioned. Generators bought recently for new camps have slightly higher kilowatt output.

Redundancy is never an issue. Generator capacity impacts on how big we can make the camp. We try to use energy-efficient appliances, and we use low-energy LED lights. But it seems that we could always do with more electricity.  One generator provides enough electricity for up to an occupancy of approximately 40 personnel, if that number increases, two generations are used, and the electricity load split between them. 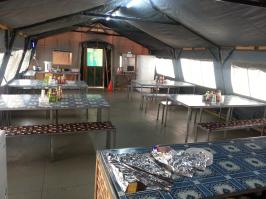 Trained chefs prepare food for the team. Dry goods are flown in ahead of the workers. Where available, vegetables are bought from local communities. Other fresh food (vegetables and fruit) is flown in weekly by fixed-wing aircraft from the fertile PNG highlands.

Women in the camp

Clients lay down certain specifications for camps. To promote equal employment opportunities, the company has recently decided to have women in the camps. This has led to additional requirements such as security fencing around the entire camp, and an inner security fence around the women’s area, patrolled by women guards. Women have their own ablution facilities and resting areas, and lockable tents (not easy).

The provision of these separate facilities creates increased demand on electrical, water, and waste systems.

Barry has made considerable use of Trade Me to research what’s out there and to compare prices. By using recycled components where available, he has kept costs down and maintained a “minimal footprint” approach to camp design. For example, he bought a number of ex-military 12,000-litre water bladders off Trade Me for $550 each.

The water tanks we were using were bulky, making them difficult to fly in by helicopter. But the bladders are only 100kg when empty, and easy to transport.

Weight and bulk are always key considerations in camp design.

The camps require managers who can ensure that safe food preparation and hygiene standards are followed. In addition, there are multiple systems to maintain, including plumbing, electricity and security. Having watched these systems being set up multiple times over the years, members of the geophysical teams can provide guidance and training to local staff on set-up and maintenance. This means local staff can maintain the camps when the geophysical teams take a break during the wet season.

Barry and his team’s innovative rethinking of camp design has been so effective and well received that construction of a third 40-person campsite occurred. To ensure that women are properly accommodated, he now includes items on his “women in camp” materials list. 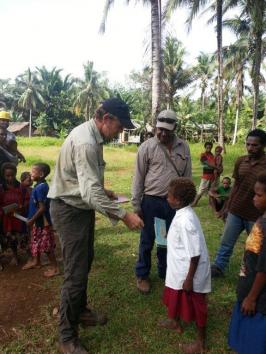 Barry has also tried to return something to the communities in which his camps are situated. Local schools typically have very limited resources and teachers sometimes go unpaid, so he has taken them stationery and books donated by Gisborne schools and communities.

It’s very exciting work. We found gas and oil in a remote area a couple of years ago, and they are now planning to extract it. This will mean scientists and biologists coming in, and they will require accommodation. The infrastructure people – surveyors and engineers – will follow them. Then will come the workers to lay 150 km of pipeline. Remote temporary camps will be needed for all of these people!

Visitors to these camps – sometimes senior representatives from other oil companies – are impressed by them. They notice that they are smaller than the usual seismic camp, but Barry is quick to point out that, being modular, they can be built to any size.

Barry can see that as the number of camps grows there will be a need for additional, reliable personnel to run them. The present practice of using geophysical personnel in their downtime is hardly a viable, year-round strategy given that these teams need to get back to their specialist work as soon as weather conditions allow.

And as the number of camps grows, resourcing them could also become a fulltime job. 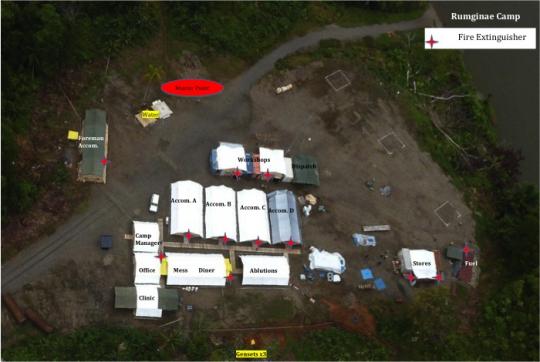