Nests for the school production

How could I use a request that we make some props for the upcoming school production as an opportunity to build my students’ understanding of technological modelling within practice?

When Sally Laing of Coastal Taranaki School was approached to make some major props for the upcoming school production, she seized on this as an authentic context for teaching about attributes, functional modelling, and outcome development.

Sally found that through their work on the props for the school production, the students had opportunities to: 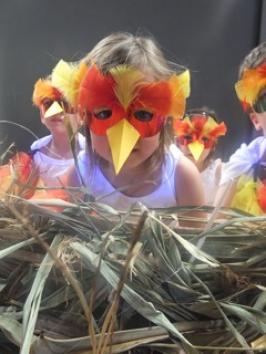 Technology teacher Sally Laing of Coastal Taranaki School was delighted to be asked if she could arrange for three large “nests” to be made for the upcoming school production, To Be the Best. Each nest had to accommodate four “nesting” year 1 students.

Sally immediately recognised this as an opportunity for her year 6 students to create a technological outcome that would meet an authentic need. There was nothing available that they could easily copy or adapt, so they would have to develop their outcomes from scratch – using modelling in practice to determine a suitable size and structure.

For outcome development and evaluation, she selected this level 2 indicator:

For technological modelling, she selected these level 2 indicators:

The producer of the school production came to the class and told the students the storyline, which was about encouraging students to be “the best that they could be”.

Three nests were needed for the production. Sally interviewed the producer to model the questioning process used for eliciting the required physical and functional attributes of an outcome.

For the nests, these attributes were:

These attributes were gathered into a simple brief. The students would work in groups to create the outcomes.

Designing and making the nests

As a first step, the students researched nests for homework and shared their findings as a class.

Then they learned how to do a basic weave using sugar paper.

Surprisingly, the grandmother of one of the students had a collection of birds’ nests. The students were able to examine these, identifying the materials used by the birds, and how they were held together.

Sally created a presentation that included photos of different types of nests and man-made structures that owed their inspiration to nests. The class discussed the photos and the real-life nests collected by Zoe’s grandmother.

After using modelling to determine the required size of the nests, the students created the basic shapes from corrugated cardboard, taping and stapling the sides to circular bases. 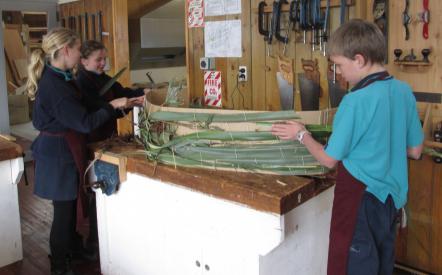 They then punched holes in the sides and wove string in and out of the holes to provide a warp into which they inserted straw, flax, and other organic material to create the appearance of nests. 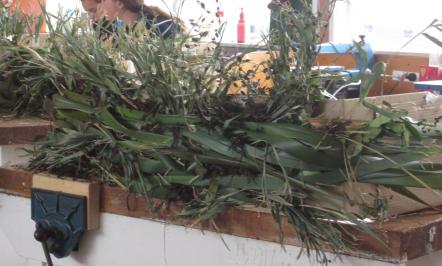 The students recorded the materials used and their performance properties.

Eventually the nests were ready to be put to the test. Because they were well made, they were easily transported to the stage without damage.

When we delivered the nests to the stage, it was like Christmas! The new entrants’ eyes lit up. The year 6 students assumed ownership of the nests and told the new entrants what they could and should do with them! 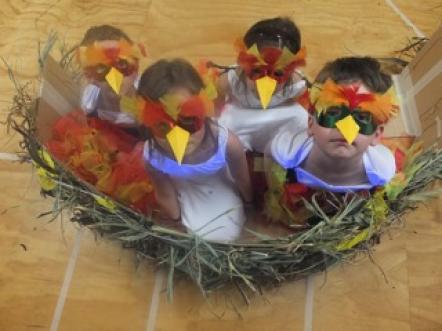 The nests dried out a little over time, leaving a few bare patches, so the students gave the stage crew some spare organic matter to fill the gaps.

Once the class had finished their work for the production, Sally continued with the weaving theme by getting the students to make corrugated cardboard looms and then use them to weave a bookmark or tablemat. She was very pleased with the standard of the weaving and the students all got to take their little looms home.

As further weaving experiences, they made harakeke flowers and containers from aluminum cans (weaving jackets for the cans and adding wire handles).

The nests were a conspicuous feature of the school production – many parents and students commented favourably on them.

The students evaluated their outcomes against the key attributes to assess how well they had addressed the opportunity/need.

The project provided multiple opportunities for modelling in technological practice, particularly by means of discussion and actual models. These opportunities included the following.

Working out what diameter the nests needed to be 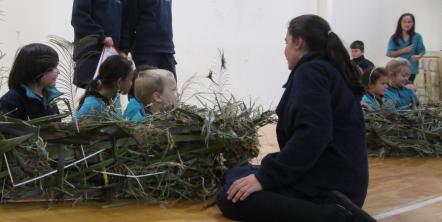 The students tried this by wrapping the card around a group of five new entrants to see if it was long enough and whether they could step over it without tripping. 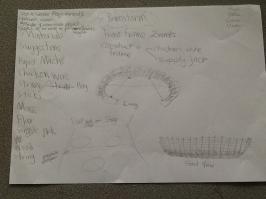 Discussions then ensued between the new entrants, the year 6 students, and the producer. The cardboard proved to be just right.

Determining how best to allow for entry and exit

A gate was suggested, but this idea was discarded because it would require modifications to the script and a cardboard gate would be unlikely to last the distance. After further discussion, the students decided to leave a gap at the back of the nests.

Finalising the shape of the nests

Some modifications were made to the original concepts as the nests were being constructed.

One of the students used her cardboard loom to make mats for her dolls’ house and planned to go on and weave some furniture. Another student experimented with weaving wire into a badge. The students are now very aware that they can take a material that is pliable and turn it into something quite sturdy – like the nests.

The energy generated by having a real need to address, with tight constraints, was great. Also, giving students the unexpected forced them to be creative and find solutions.

Sally would like to grow her students’ understanding of technological modelling beyond practice. So she plans to explore modelling in other contexts and to develop a way of assessing what the students understand.