This teaching snapshot is an example of an inclusive programme of learning in technology.

Fairhaven School in Napier caters for special needs students aged 5 to 21 at its base school and six satellite units. As the range of student needs and abilities is varied and many can't record their thinking in written form, teachers focus primarily on building oral communication skills and use pictures as another form of communication. All lessons are based on The New Zealand Curriculum.

Farmer Alec Olsen gifted the school the use of a pocket of native bush next to a local campsite for an outdoor classroom, so they used this as an opportunity to develop an environmental technology project.

Students visited the site, which they named Te Manu Kōrero (the calling of the birds), and identified issues such as access and the need for disabled toilets. Each of the four high school classes elected two student representatives to work on a project to use the area more effectively, with responsibility for keeping other students informed about their plans. 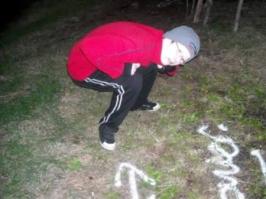 Mapping out a pathway in the bush.

At an initial meeting of the student reps, teachers and Alec it was decided that access was a priority, as until a solution to the problem of wheelchair access was developed, many students would have difficulty using the area.

At the start of the project, one of the student reps wrote to Downer Edi Works requesting assistance and, as a result, supervisor Steve Sellars agreed to provide his time and that of a digger driver as well as the necessary machinery.

Two students represented the other six on weekend 'site days' when they and their teachers met with outside stakeholders – David, Steve and Alec. Alec, the land-owner, worked with the group and recruited more support from his contacts in the contracting business.

Brief development and dealing with constraints

At the first onsite meeting, Alec explained the constraints on the students' brief: that the track needed to be robust enough that cattle and sheep wouldn't destroy it when mustered through the area; that the existing natural watercourse couldn't be changed; and that certain native trees inside the bush could not be cut down.

The students discussed the track design, noting that it should include areas of interest such as bird habitats, seed sources, special trees, and waterways. They wanted the track to be wide enough for two wheelchairs but suggested passing lanes as a solution if that wasn't possible. They also talked about how much slope a wheelchair could easily manage and which sorts of surface might be most suitable.

The scope of the project had been restricted by the students' physical ability to dig and construct the track, but when Steve explained the capability of the machinery he was offering, the students decided to extend the track. Downer EDI Works would provide a digger and driver for a maximum of two days, and students would manually lay the surface material during a family working bee. The students amended their brief with the new specifications agreed on during their consultation.

The students communicated their ideas by marking the proposed pathway with spray paint, to show where the digger should form the track, the significant native trees that could not be cut, and the sensory areas where the bigger track areas would be needed. Students from other classes and campuses regularly visited the site during the year, and the student reps used these markings to explain where the track was going and why. 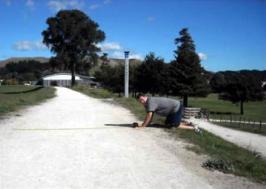 Measuring out a track. 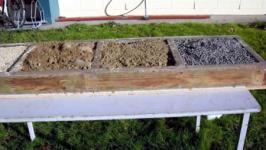 Teachers developed the students' technological knowledge through interaction with a variety of functional models. They visited the Napier Rotary pathway, which had been constructed with wheelchair users in mind, and engineer Colin McNatty explained how he had designed the path. The students measured the pathway width and decided that their track should be narrower because it was weaving through the bush. They tested the slope by having one student move herself up the path in her wheelchair to see what she could manage on her own.

Which material would be most fit for purpose?

Back at school the students looked at surface materials that were available locally at no cost to the school: these were red metal, clay, road chip, and lime sand. They tested and evaluated these materials according to their performance properties by moving across each sample surface in wheelchairs and on foot. The students had thought the red metal, used on the farm tracks, would be the sensible choice but their testing showed that the larger rocks stopped a wheelchair moving. The clay became slippery when wet and the road chip didn't compact well so the wheels got stuck easily. Based on their evaluation of the performance properties, the students selected lime sand as the material most fit for purpose.

During a discussion on possible solutions to the problem of slopes being too steep for wheelchairs, some students suggested building bridges. Students explored these ideas and designed and modelled bridges using card, ice-block sticks and tape. However, when the students spoke to Steve about the issue he donated some slightly damaged culvert pipes. The pipes were covered with soil so that the track could be built up to ground level while maintaining water flow. 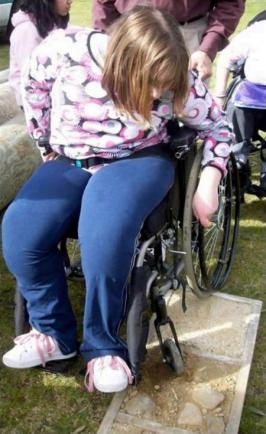 The students informed parents and whānau about their progress during the school's regular parent meetings, and some were able to donate materials or lend machinery for the project – Technology Teacher Merv also sourced some old vineyard posts through the Waste Exchange website.

In preparation for track construction, the students cleared old branches from the site and pruned the lower branches of trees to allow digger access. 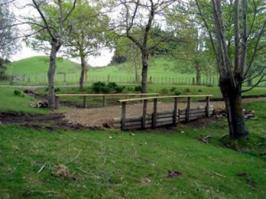 Students at the school have since identified another issue: they want to attract native birds to their outdoor classroom, and are now working on a project to that end. They have built a shade structure to grow plants and want to attract insects for the birds. Alec informed the students that he hadn't ever seen wetas on the farm, so everyone was very excited when the weta 'motels' they had created were found inhabited. DOC (Department of Conservation) staff were also excited at the find and plan to work with the students on tracking wetas. Local firm Sirtrack is working on developing electronic tracking transmitters to help the students with this.