A brief for a local business

Chad Ockerse was looking for a year 13 food technology project. He approached Nitro Cow to see if they had any specific needs for the future of their business. They needed equipment for making nitrogen ice cream that was mobile and could easily be transported around multiple food markets. Their current system required a large, heavy Hobart mixer to make the ice cream which was not easy to transport. Nitro Cow also wanted some ideas for new flavours.

The ice cream product is required to:

The idea behind the business

Watch how the ice cream is made:

Chad explored various carts used by ice cream vendors here and overseas. He found that domestic ice cream makers would not be suitable for a market vendor selling environment. It takes several hours to make the ice cream and they generally rely on refreezing a barrel for each batch.

Chad came up with the idea of a table top for an ice cream trolley. The table top contained various compartments for the equipment and ingredients. 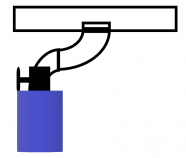 The cart has a metal plate with a mechanism underneath that is similar to an aerosol dispenser. This mechanism is made with an electronic valve and dishes the nitrogen out in set amounts with the push of a button. This protects the operator from contact with the liquid nitrogen.

Chad used steel pipe because the nylon braiding used in steel hoses freezes and can become brittle when exposed to liquid nitrogen. The pipe needed to be insulated and Chad had to learn to bend pipe without crimping it.

The red part of this design is a wooden base that is inlaid with an aluminium bowl. The base has two vent holes in it which release the gases that build up inside while the liquid nitrogen turns to vapour.

The school didn’t have the equipment Chad needed to create and cut the metal plate to shape so he contacted One stop cutting shop (OSCS). Chad created designs for the metal plate using CAD and sent them through to OSCS.

Chad welded the handles on the plate and bolted it together.

Liquid nitrogen is a cryogenic liquid and you need to handle it carefully. It has a large expansion ratio on evaporation. One litre of liquid nitrogen can result in about 700 litres of gas. Pressure can build up in a sealed container due to the boil-off of nitrogen gas, so you have to store it in insulated, vacuum-jacketed pressure containers.

People using liquid nitrogen must wear gloves and protective glasses as contact with the skin or eyes can cause frostbite.

The school asked Nitro Cow for feedback on the development of the conceptual design. Nitro Cow thought that the design looked very interesting but they wanted to see a business model showing its practicality and probable success in a real-world market. They also wanted a safer way to deliver the nitrogen to the chamber.

It became problematic to source, store, and use the liquid nitrogen in a school environment.

Chad would need to work in an industrial environment to complete the next stage of prototype development and to create a safer nitrogen dispensing system, he would have to get guidance from industry experts using industrial tools and equipment. Chad turned his focus to developing a prototype that used dry ice instead as dry ice is food safe and was available at his school. 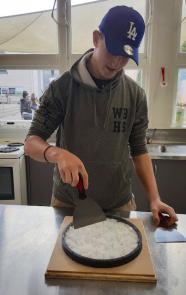 Chad used the plate from his original prototype with dry ice instead of liquid nitrogen. Dry ice has a higher temperature capability (-78C) compared with liquid nitrogen (-196C) so it takes longer to freeze the ice cream through the heavy plate.

Chad continued the trial using a thali, an Indian steel plate that is used for serving food, but the dry ice warped the plate. He decided that the heavy metal plate on his original prototype would work but the dry ice would need to be in the holding space for a bit longer (25–30 minutes) to effectively cool the plate and make the ice cream. It would need to be set up and cooled beforehand.

Chad researched current and future trends in ice cream flavours. He found that the most popular ice creams at the moment are:

Chad also looked at the sales figures from the commercially-made ice cream at the school cafeteria. These showed that both flavour and texture were important. Mellow-flavoured ice cream with texture added through a chocolate coating or adding crunchy ingredients were popular.

Establishing a successful ice cream base was important. Customers could design their own ice cream by adding flavours to the base.

Testing flavours with other students 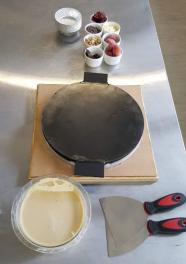 Chad got a year 10 class to come and trial some of his flavours. The flavours he trialled were:

Chad used both the metal plate and the thali to speed up the process.

The wild berry and chocolate ice cream received the most positive feedback. For the final practical, Chad used white chocolate and raspberries/strawberries, dark chocolate and walnuts as well as an assortment of other berries.

At the All Boys Conference, Chad gave a demonstration making Heston Blumenthal's bacon and egg ice cream using dry ice. He ran three trials before the conference so that he could perfect the recipe. On the first trial the bacon flavour was too strong so on the second trial he reduced the amount of bacon and added cream. The third trial was the most successful, Chad warmed the cream before adding it to the mixture to create a thick, creamy base that froze well on the steel plate and did not need to be refrozen.

The delegates thoroughly enjoyed the demonstration and the ice cream.

Evidence from this project was used for assessment against the following level 3 NCEA standards: