A junior high school challenge in which students had to make a gingerbread house first sparked Ritu Sehji's interest in the work of Heston Blumenthal. At the same time, she came across two television series – Heston's Fantastical Food and Heston's Feast.

In the first series, Heston created supersize food products such as an ice-cream cone that would hold a ton of ice cream. The second series involved Heston going back in time to recreate famous period dishes.

Ritu became interested in sharing Heston‘s philosophy and multi-sensory approach to food with her students. it represented an alternative and engaging perspective for students to think about and learn differently about food product development.

She also noted that Heston’s design approach is equally applicable to other technology areas, and in fact was applied to web design by the company Offroadcode. 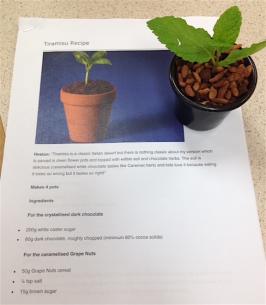 Ritu explored one of Heston’s recipe books – The Fat Duck. This is based on the story of his restaurant The Fat Duck. The book includes signature recipes and the scientific knowledge that informs these. She also watched Heston’s videos on Youtube and read his recipes repeatedly.

Together, the students and Ritu watched the videos on tiramisu flowerpots and Titanic inspired iceberg.

Heston's recipes are so elaborate that Ritu suggested the students unpack them and create a flow diagram for the food preparation process. The diagram simplifies the processes and gives them a clear indication of what they need to do.

Ritu supported the students as together they prepared his recipes once, identified problems in the process, and repeated it again – attempting to overcome the problems as they did so.

The students worked in small groups and identified sections of the recipe each student would focus on. For example, see the initial work plan below.

At the end, they were all required to put the separate components together to create the tiramisu flower pots. Repetition made it perfect.

Working with the students on the tiramisu ensured their confidence grew as they shared problems and found solutions together.

At the start, the students thought it was all very weird and looked at me like I was turning into a crazy scientist!

However, as the students progressed through the trialling of a Heston Blumenthal recipe, it became second nature to them. The vocabulary students' used for techniques and processes changed.

Because the recipes were complex and time consuming, the students' time management, technical skills, and management of resources improved. For example, the class tried bacon and egg ice-cream, and instead of purchasing the dry ice, which was expensive and had a limited life, they worked out that the custard could be frozen in an eggshell to give a similar effect.

The Heston Blumenthal approach to food preparation could set level 3 students up to display complex processes and procedures as required for AS 91643: Implement complex procedures to process a specified product.

Students developed depth in their projects by talking about the functional properties and the chemistry behind ingredients. The students critically analysed the different aspects of and philosophies behind food creation.

The understandings developed about creating new food materials could also provide evidence for AS 91613: Demonstrate understanding of material development.

Ritu observed that exploring the Heston approach extended the students' knowledge, skills, and understanding in food preparation and cooking. It also gave them an opportunity to experience how their understandings connected coherently with all three strands of the technology learning area at level 8. It gave students confidence, setting high expectations for their learning and possibly achieving scholarship.

The Heston recipes and approach to food preparation challenged students to resolve problems beyond a narrow brief and to explore fitness for purpose in its broadest sense.

An article on culinology in Food New Zealand caught Ritu's attention. She could see that this concept was new and innovative and could offer the students a breadth of understanding of food – and possibly more career options beyond school. The concept of culinology required students to look at four core areas – food technology, food science, culinary arts, and research and development. 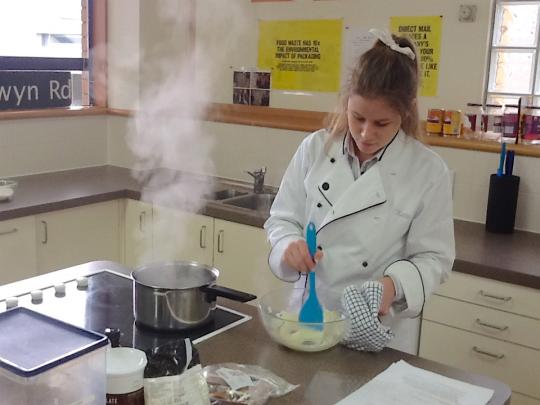 Culinology is a concept that was pioneered and trade marked by the Research Chefs' Association. It is defined as the blending of the culinary arts and the science of food. Culinology is considered a helpful approach for professionals working in food product development, including chefs and food scientists.

For further information on this concept see: Research Chefs Association: About RCA.

The students were given opportunities to grow their knowledge:

The underlying key to all engaging and meaningful learning is an authentic and local context and client and need from which to develop the brief. Three students worked with local cafés and two others with committees at school.

These projects enabled the students to develop their capabilities and incorporate real world expectations and problems. For example, one student had to create a destitute gourmet meal for the ethics committee at school. This naturally had a very tight budget as well as focusing on the culinary arts and the nutritive value.

Another had to recreate a popular chocolate cherry slice for a café as a gluten free product – she then went on and used her Heston Blumenthal knowledge to turn the slice into a flowerpot and trialled this at the café. 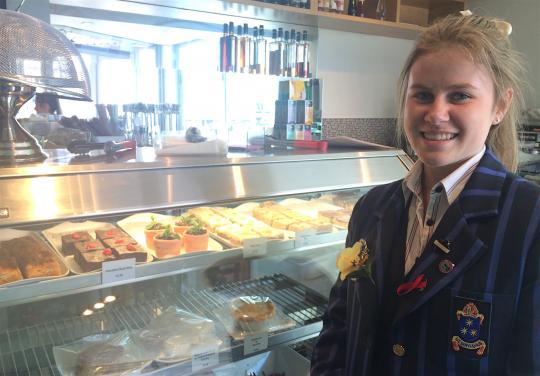 Some benefits of exploring culinology

Thinking about food in this way helps to ensure the students are carrying out technology projects within authentic and local contexts. With this come multiple interactions with stakeholders, resourcing, and managing the project. The students also have to take into consideration the socio-cultural aspect of food, which is clearly emphasised in the nature of technology strand.

Incorporating culinology skills and knowledge, rather than just preparing a food product, provides students with embedded understanding, lifelong skills, learning beyond school, and opportunities to develop their capabilities and key competencies.

Culinologists are in demand in the growing food innovation scene in industry and this can provide a new career pathway to explore.

Ritu has also used social media in innovative ways throughout her programmes.

A student who had developed a gluten free chocolate cherry slice and then formed it into a flowerpot using Heston Blumenthal techniques, used social media to share her product with the architectural design students at St Bede’s College in Christchurch. The students were asked to comment on the quality of the design using design principles. This provided valuable feedback for the student from a large number of design experts.

Ritu has created her own blog and students use this to request feedback from well-known New Zealand chefs. Professional chefs can give feedback to the students on ways that they could improve their work, suggest products that could be used to enhance an outcome, and make suggestions on presentation.