Design and Visual Communication (DVC) students at Rangiora High School responded to the post-earthquake needs of their community by developing designs for rebuilding the town centre. Year 11–13 students designed temporary buildings, town plans, and identity icons for their client, the Waimakariri District Council.

Although not as badly affected by the February, 2011 earthquake as some parts of Canterbury, Rangiora (25 km north of Christchurch) still suffered damage to roads and buildings. Rangiora High School staff and students worked off-site for several weeks while the school buildings were checked for structural damage, and some also had to cope with homes damaged by the earthquake. A year later, closed-off footpaths and quake-damaged buildings were still evident in the town centre.

This, the DVC team decided, led naturally into a Technology project. The earthquake authentic context would provide students with an opportunity to work on a solution to a problem in their everyday environment. It also fitted with the New Zealand Curriculum principle of community engagement. Catherine approached the Waimakariri District Council (WDC) to suggest that students develop designs to help with the ongoing ‘rebuild’ of Rangiora. The council agreed to this, with Senior Policy Analyst Heike Lulay acting as the client on its behalf. Students were immediately engaged in the project because they were working on a very real problem and knew there was a possibility that their ideas could be incorporated into the town’s future development plans. 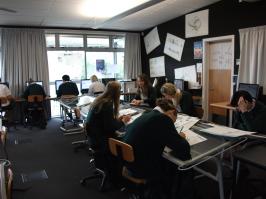 Heike visited the school to talk to students about the council priorities for post-earthquake town planning. She discussed the council’s Rangiora Town Centre Strategy (written by its Policy and Strategy team and adopted in September 2010 before the first earthquake), shared a plan for a new retail development linking two main streets, and talked about possibilities for renovating or building new amenities. Heike specifically asked students to consider incorporating aspects of the town that had made it popular in the past. Catherine had copies of building plans drafted for the council in the 1960s displayed on the wall for student reference.

Year 11 students were given a brief that required them to draw a set of plans for a temporary dwelling or unit to meet the needs of a homeless family, a medical emergency unit, an urban search and rescue team, a food kitchen, or a retail outlet. The students could also negotiate with their teacher if they wanted to design for an alternative end-user. Design constraints included size – students were told to base their building on the size of a shipping container but, as these were already in use as Christchurch ‘pop-up’ shops, they needed to bring their own creativity to the challenge. Students had to consider at least two societal and/or environmental priorities in relation to their brief, and their solution had to conform to the concept of sustainability.

While considering their own ideas, the students researched the work of a New Zealand or international architect. They presented a visual overview of the architect’s work, and discussed how it might influence their own outcome. Students also researched ideas around building design, such as interior design, shelving, window displays, security systems, and emergency vehicle access. They presented their work either digitally or on A3 paper, then evaluated their research, indicating which ideas they might develop further, and which would have a positive impact on the quality of their design.

Each student found a stakeholder (somebody to act as the client in their chosen context) who could offer feedback as they worked through their design. At this stage, they also considered any local resource consents that might be required. 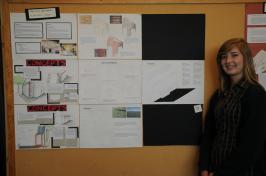 Students made a series of freehand concept ideas, 2D and 3D, to show a range of options for an overall solution. They annotated these to clarify their ideas – for example, showing how people could move from one area to another. 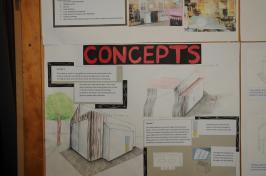 The students then added rendering and shadowing to enhance their drawing. They evaluated their ideas in relation to societal/environmental considerations, and the principles and elements of design. Students produced scale instrumental drawings for their final outcome (done either digitally or by hand) and instrumental pictorial views of all components and the unit in situ.

Year 12–13 students considered Rangiora township in terms of buildings, roads and decorative features, and looked at ‘identity symbols’ in other cities, such as Rakaia’s fish sculpture, and art deco in Napier. They could choose to research, develop and design to a conceptual model stage either of the following:

Students had the option to work in pairs or as a small group on the township plan but were to work individually if they chose to develop an identity icon. The students also chose a stakeholder for their project. One team, for example, was designing a new cafe in the town centre and asked Heike to be their 'hypothetical stakeholder'. She met them several times during the year (and once brought WDC Senior Planner Trevor Ellis) and stayed in email contact to answer questions.

As in the Year 11 course, the students first did an assignment about the work of a well-known architect and how it might influence their own design.

For their rebuild work, the students produced a series of 3D sketches using instrumental paraline drawing techniques, isometric, and oblique. They evaluated their sketches against the specifications and indicated reference to the life cycle and sustainability of their development. The students then had to produce to scale hand-drawn or digitally-produced third-angle orthographic instrumental drawings of the final outcome and of the key components, along with pictorial views of any significant components and of the outcome in situ. 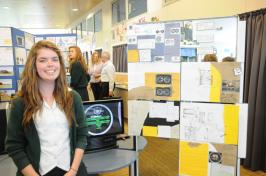 This work was completed by the end of Term 2 and the students presented their designs to their stakeholders. They were given feedback on their solutions and used this information to evaluate their solution. The students produced a scale model of their design (this could be a 3D physical part or whole model or a 3D digital model) and prepared a presentation of their communication portfolio and model to show their client. 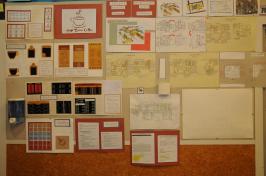 The students had been given a broad brief to encourage their creativity, and the variety of final outcomes proved the value of this approach. DVC teachers Catherine, John, and Carey Prebble were pleased that student success also appeared to vindicate their pilot assessment programme. Catherine says she had noticed in the previous year that student creativity and innovation was being stifled when mention was made of credits, standards, and assessment. At the end of that year, the three teachers decided that they would trial teaching through authentic context and learning objectives with the Year 11 and 12 classes in the following year. During the following year, they deliberately did not teach through NCEA Achievement Standards, nor did they mention them to the students. Instead, teachers encouraged students to work through the technological process and ensure they used appropriate DVC knowledge and skills in presenting their work. In Term 4, teachers and students looked at the Achievement Standards for their level and decided which they had covered.

This approach required that staff had a good understanding of a large number of Standards so that they could match up the assessment according to the talents and evidence that their students produced. They found that some students excelled in the technological process and design development, some completed the design process adequately and excelled at the formal drawings, while others achieved well in both. Catherine acknowledges that the whole process was a challenge for teachers to facilitate, but says that student engagement and the resulting quality of their work made it worth every minute.

In late October, the four classes presented their work to their clients and other guests at a community event showcasing senior students' Technology projects. The responses to the student work were very positive. Heike comments, “The students did exceptionally well and ought to be congratulated. I am very impressed with the final outcomes they produced. The standard of the work is very high and professional, and many of the concepts are in line with the vision we would like to see realised for Rangiora as part of the town centre rebuild. The students were a real pleasure to engage with.” Local newspaper Northern Outlook featured some of the students’ work in its next issue.

Will Roberts created a temporary retail outlet design. He used plans supplied by Totalspan Sheds in Woodend, which he adapted to create suitable High Street stores. 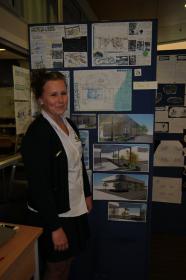 Olivia Adamson developed a very innovative design for a music-themed cafe that would appeal to teenagers and young adults.

Peter Cammock worked on a road-transport design for Rangiora township, which involved complying with road standards, ensuring his design was user-friendly for pedestrians, and including parking needs. To ensure he understood the needs of pedestrians, Peter carried out a walking survey. He is pleased with the results of his work and plans to extend the project in Year 13. 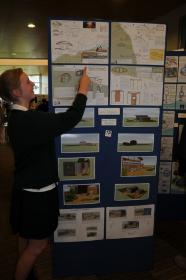 Laura Illingworth designed a performing arts centre 'to meet the needs of the community'. She included meeting rooms, a cafe and a parking lot, and located it opposite the town hall. “It’s green, to take away the ‘industrial’ feeling, as grey isn’t entirely welcoming. It has wide open spaces which is a lot more inviting. I chose a curved roof. And wide footpaths are also important.”

Meghan Corby designed a huge steel-framed fountain as a Rangiora town icon. This referenced a past town promotional phrase 'Refreshingly Rangiora', which she thought she could bring back.

James Naylor designed an art gallery with capacity to act as a wedding venue or cinema. He used glass as the main design feature, with a large glass 'wrap around' and a 'sail' on top of the building. He incorporated some solar panel windows to make the building more sustainable, and considered a glass roof, but decided that steel would be easier to work with.