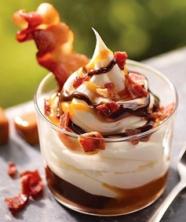 Annaliese describes the unit as a kind of "reverse brief development". The students study the performance properties of the bacon sundae, then work backwards to investigate what the brief given to Burger King’s product development team could have been and why it may have come about.

After reading an article about the bacon sundae’s American debut, Annaliese decided this unique product would be the perfect example for a three-day unit. This unit would reinforce the students' brief development knowledge and introduce them to some ideas related to the Characteristics of Technology component before they started a larger cookie unit.

“At this stage, the students have knowledge of product development and specifications, but they don't really know about needs and opportunities, so this is the perfect way to work back from what they know to stuff they haven’t learnt yet. I thought that if we took the product and worked backwards they would be able to pick it up,” Annaliese explains.

The product also provided excellent links to other aspects of the curriculum. Elements of Technological Knowledge were covered with the bizarre combination of ingredients used to form a new product. The social context of the bacon sundae was ideal for the Nature of Technology strand.

Initially, Annaliese thought it was strange to make a bacon sundae. However, when she read that Burger King was going on the stock exchange at that time, she thought it could be trying to get more publicity. Because Characteristics of Technology talks a lot about context, she thought – "Wow! This is a perfect little unit in which a product is being launched at the time of a very specific related event.”

Annaliese created a worksheet that students would refer to as a guide over the three parts of the unit.

To develop students' understandings, Annaliese created a list of questions and tasks to prompt thought and discussion about two key articles she had found. “One article was called ‘We eat it so you don't have to'. It has pictures of each step of the journalist eating it and describing it. The second article was about the big picture – the target market, and the fact that Burger King was launching on the stock exchange.” 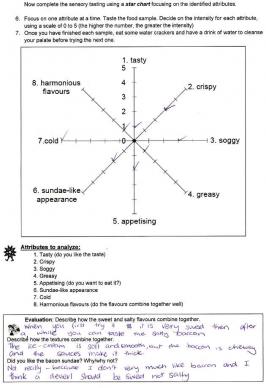 Annaliese created a star chart with eight different attributes. The students would rate these attributes from 1 to 5, according to level of intensity. The eight attributes were tasty (Do you like the taste?), crispy, soggy, greasy, appetising (Do you want to eat it?), sundae-like appearance, cold and harmonious flavours (Do the flavours combine together well?).

The worksheet for this session also included the recipe and step-by-step measures for creating, tasting and evaluating each sample.

The final lesson involved class discussion and group work, using the knowledge and data gained in the first two classes.

First, Annaliese introduced the idea of the bacon sundae to the girls and asked whether they would be interested in trying it.

“Maybe two out of the 25 said yes and everybody else said absolutely no,” Annaliese says. “I asked why, and most said, ‘those flavours don't fit together’. But two students said it would be interesting to see what it's like.”

Annaliese then asked the students why they thought the unusual sundae would have been produced, and had them read and take notes from the two short articles she had found.

The students then had to use the photos and descriptions in the articles to identify the properties they thought the bacon sundae would have. Annaliese directed the students to make a clear distinction between the physical and the functional performance properties of the sundae.

“For example, with the caramel sauce, the physical properties would be that it is runny, has a golden colour, and is squirted around the top, while its sweet flavour complements the saltiness of the bacon. I try to get the girls to put those things together.”

Students working on the Bacon Sundae.

Annaliese reinforced the seriousness of the sensory session by making the tasting as close to industry standard as possible. This included supplying hairnets, plastic ramekins for each sample, and water crackers and water to cleanse the palate after each taste.

The students had to follow the steps on their activity sheets, measuring out exact amounts of each ingredient to create identical sundae samples. To maintain consistency, the bacon was also cooked for a specified time in the microwave.

The students then began the tasting process, rating each separate mouthful for a specific attribute on the star chart. Annaliese reports that the students responded extremely well to the professional environment she had created. “The students were brilliant. You always know the lesson is going well when the students are really engaged – eating and tasting.”

At the end of the session, Annaliese asked the students their personal opinion on the sundae and how it mixed together. She was surprised to find that 12 of the 24 girls enjoyed the flavour combination.

For the final session, Annaliese focused on the students' understanding of brief development. She started the class with a quick discussion and brainstorming session on salty and sweet combinations found in popular foods. She then used a computer-assisted presentation to review the previous two lessons.

Annaliese put the students into groups of four to work together on a possible brief given to Burger King’s development team.

The students were supplied with an A3 worksheet which contained blank areas for the various elements that influence the brief development process. This included the physical and social environment, the physical and functional attributes, the intended users, and the need(s) or opportunity(ies) that led to the product being developed. 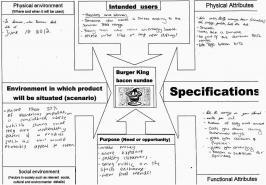 During this time, Annaliese checked on the students’ progress, giving prompts for the more difficult sections. “They found the physical and functional attributes quite easy because we had looked at that in the practical, and, once I related it back to the article, the environment section was easy too,” Annaliese says.

The need or opportunity section proved more difficult. “For that part, I kept it very simple and focused on a need. I told the students that Burger King is going to list their company as a publicly listed company and wants to get its name out there. The girls who had more knowledge of the share market and publicly listed companies shared their knowledge with the class.”

Annaliese found that the most difficult aspect for her and the students was determining the wider societal issues that could have influenced the development of the sundae. "I showed the students an article on the rates of obesity in American Society."

Annaliese was particularly pleased with the possible needs and opportunities that the students identified for the brief. These included “a marketing ploy to get the brand talked about” (a need), “following new food trends” (an opportunity), and “targeting people who want to try new things” (an opportunity).