How could I introduce concepts of mass production in the year 10 foods programme?

Jeff Thomas at Birkenhead College found that the context of batch production provided opportunity for students to grow their understandings around planning for practice, including Hazard Analysis and Critical Control Points (HACCP).

Jeff has a background in hospitality and is a trained chef. He had experienced batch production in various restaurant kitchens. He was interested in sharing the knowledge gained from these experiences with students, with a focus on planning for practice.

During service time in a restaurant kitchen, batch production processes are often used – with chefs responsible for an individual component of a dish. The chef garde-manger (French for the keeper of the food) will generally look after the entrees, side dishes, and dessert components that are pre-prepared. His team of workers will then have individual responsibilities in making, preparing, plating, and garnishing various dishes as these are ordered.

Jeff saw the context of batch production as providing a useful opportunity to develop understandings in planning for practice and to also add in some higher-level understandings of food safety – in particular the concepts of Hazard Analysis and Critical Control Points (HACCP).

The foods programme for year 10 included an assessment against the home economics achievement standard, Demonstrate understanding of how cultural practices influence eating patterns in New Zealand. To make links with this, Jeff also wanted to introduce dishes from a range of cultures so he used this as a theme for practical food preparation activities.

In the practical classes, students were usually given a recipe, the teacher would give a heads up on any challenges in the recipe, and the students would create the dish. 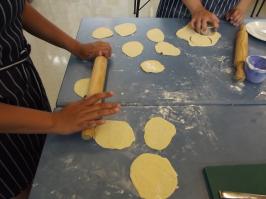 Jeff started with recipes that had a specific cultural flavour, including Italian gnocchi, French crepes, Chinese dumplings, and Indian samosas. The recipes needed to have enough challenges and stages to involve all four students in each group.

Before they made the products, Jeff challenged the students to plan how they would go about making them in their groups: 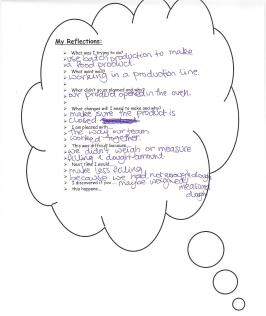 The final product the students batch produced was empanadas.

Jeff let the students have an initial go at creating their production plans and making empanadas. He photographed their outcomes and followed this up with an opportunity for the students to reflect on the success or otherwise of their batch production processes.

The interesting discussions that followed helped develop the students' understandings about yield and quality control in batch production. Each of the groups used speech bubbles to capture their reflections.

Jeff also introduced the concept of HACCP and showed the students a YouTube clip that outlined how HACCP was introduced at NASA.

The students were then asked to note the critical control points on their production plan for making empanadas. 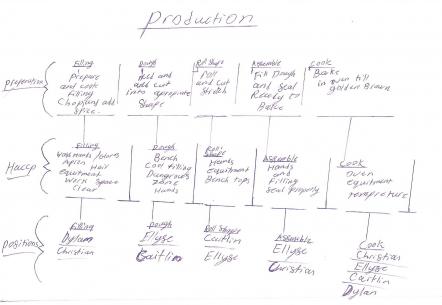 A generic class process for batch producing the empanadas was developed from these discussions, and then each group wrote up their own with further details. 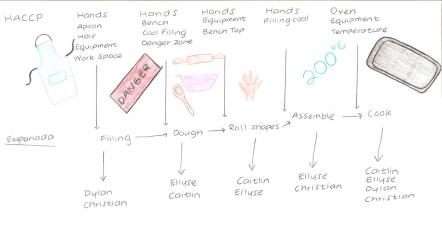 The students completed their plans for their second go at the empanadas batch production with more confidence and proficiency. They then produced these according to their plans and tested whether their process did in fact produce a quality outcome and the yield predicted. 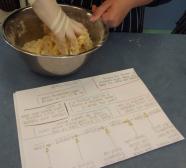 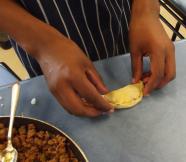 Making a product for a second time is not the norm in junior practical classes. Jeff could see that the opportunity for reflection and adaptation, in addition to the extra planning, improved student outcomes. He says the students were faster and more confident in what they were doing.

The second time, the students could also add times for each stage of the production and consider this aspect of efficiency in their batch production. 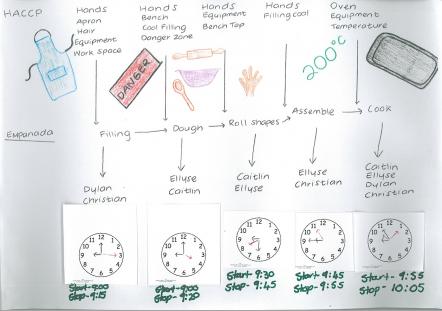 The students were able to plan batch production for the food products in their groups, in line with the level 4 indicators for the planning for practice component.

Reflection on practice and its outcomes rather than giving the answers proved to be an effective strategy to develop student’s understandings.

With students having to work together to plan an effective process for their batch production, the practical classes had become more student-directed.

The students were easily able to translate the HACCAP concepts to their practical batch production line for the empanadas. Jeff believes introducing this by using a YouTube clip engaged the students. They also appeared to grasp the importance of food hygiene in practice, which is sometimes difficult to convey in junior secondary.

This work was trialled in term 4 and the time available was somewhat eroded by the school's end of year arrangements. Jeff would like to revisit the unit next year and further develop aspects of the unit.

Jeff has also been exploring the teaching and assessment required for AS 91056 Implement a multi-unit manufacturing process. With the year 10 students growing understandings in the context of batch production, this could be an interesting addition to the year 10 foods programme.