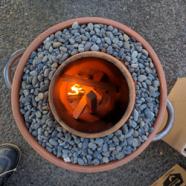 This resource gives an example of high quality student outcomes and describes key aspects of the project.

Zac's teacher mentioned that some of her favourite were chicken tandoori kebabs cooked in a tandoor oven.

Zac was encouraged to investigate whether he could make his own tandoor oven. He found it was relatively easy to make one using several terracotta pots and insulating material.

Chad had made a DIY Tandoor at home, having seen one at the Indian restaurant where he worked.

“Once we develop good relationships with students they feel that they can tell you about their passions and share their experiences, skills, and knowledge from their workplace or outside of school without hesitation.”

The kebabs were highly successful. 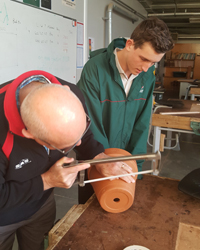 The base of the smaller top pot was sawn off. Chad enlisted the help of the workshop teacher for a method to cut the terracotta without breaking the pot. They used a hacksaw initially, but found an angle grinder gave a cleaner finish.

Small stones were used for insulation between the inner and outer pot. There are different opinions on what is the best insulating material in a terracotta pot Tandoor oven. Sand and vermiculite are also used. Insulating material needs to keep the heat in the oven rather than heat up itself.

Kindling wood was used to make the hot coals.

Cooking in the Tandoor oven