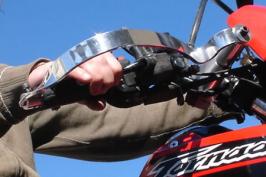 Identifying an authentic and local need

When an accident caused Tom Maguire to be thrown from his trail bike, the hand guard trapped his wrist when he fell forward, nearly "twisting it to breaking point".

Tom did some research within the local rider community and on blogs and online forums and found that this issue was well-recognised. "I found that in many cases the risk of using hand guards outweighed the safety benefits they provided," he says. "There was no evidence that there was a hand guard available that gave full impact protection while allowing hands to be free in an accident."

Tom decided to try to create a solution – a "soft-hit hand guard" with "all the positives, and none of the negatives" of existing designs – for his year 13 technology project. He wanted to come up with a guard that would allow the release of the rider's hand, avoiding wrist and hand injuries when an accident throws the rider forward, while providing the same level of protection for the handle-bar, gear levers and front brakes from shrubbery, rocks and gravel provided by existing guards. To achieve this he needed to come up with a guard with an appropriate release system.

Tom's first step was to draw up several concepts using a variety of different approaches. "I soon realised that I needed input from experts to assist me in narrowing down my range of options and to provide me with specific knowledge around product development, material properties, manufacturing and processing, and time management." 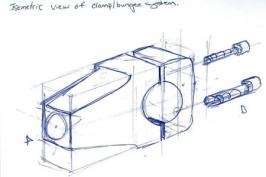 Tom's teacher helped him to identify stakeholders for this project – people who would be able to take him through the various stages of development and testing of his hand guard. Tom's uncle, product designer Pat Maguire, helped him pick out the elements within his seven concepts that had the most potential. Two concepts showed promise and the best elements of both were combined to make a final concept. Following Pat's advice, Tom refined his ideas down so there was a minimum of working parts, a practice that Pat explained made products "cheaper to develop, easier to manufacture, and much more reliable if done right".

The two important innovations in Tom's project are the locking systems on either side of the guard. Tom's "torsional rubber locking system" is a long bolt, encased in five sections of compound rubber, that is threaded into a washer. This is inserted inside the end of the handlebars and the bolt is tightened with an Allen key, compressing and expanding the rubber, which locks it against the inside wall of the handle bar's pipe. This system can, therefore, fit handlebars of any size.

When first trialled, Tom found this component was not locking tightly enough, so he rearranged the components to engage larger rubber sections to give better clamping power.

On the rider's side of the handlebars, Tom's "elastic self-aligning clamp" fastens to the motorcycle with a strong elastic bungee that runs through the inside of the mechanism and connects to the outer bar of the hand guard. Tom tapered the bungee and the inside of the mechanism to ensure that the hand guard was always secure. "The idea behind this was a small point going into a big hole, so if the bungee is extended it will spring back quickly and snugly with no resistance."

With this arrangement, the guard protects against front, side, and downward impacts, but gives way when pushed with enough force from the rider's side.

From designs to prototype

Taking these concepts from design to prototype was a long process, as Tom had to find the exact balance that would make the guard give way before it broke the rider's wrist yet remain strong enough to stay firmly in place and protect from exterior impacts. Keeping the design as lightweight and unobtrusive as possible was also a concern for the guard's marketability.

In this process, he worked closely with mechanical engineer Vineet Rajasekhar to design the guard, determining the type of materials and dimensions needed to reduce size while maintaining strength. Tom and Vineet then modelled the design mathematically using data on bone density gathered from Tom's brother, medical radiographer Daniel Maguire, in conjunction with physics and maths equations.

"From this we found that the materials would easily stand normal riding accidents and would release the rider's hand, arm or wrist without breaking any major bones," says Tom.

Making and testing the prototype

After drawing all the components to scale and gaining stakeholder approval on these designs, Tom purchased his materials and began machining. As he was unsure of both his existing skill level and whether some more difficult components would work properly, Tom made some components with similar yet cheaper materials and showed this to his stakeholders before creating the final parts with aluminium alloys.

With the prototype ready for testing, Tom fitted it to a range of different sizes, models and ages of motorcycles with positive results. As he didn't have the elaborate facilities of a large auto manufacturer and "didn't fancy being a test dummy" himself, further testing was carried out with a spring balance gauge – measuring in newtons (N) – to further determine the force required to release the guard in an accident. The results from this, together with the previous mathematical data gathered from Vineesh and Daniel, demonstrated that the guard exceeds the specifications outlined in Tom's brief. 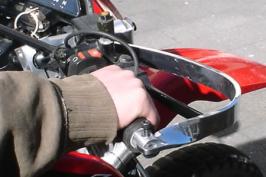 A smart and innovative solution to a real problem

Tom is happy with his finished prototype but would like to develop it further by removing the bulky aluminium sleeve that protects the bungee so it is incorporated seamlessly through the curved front hand guard. However, the response from his stakeholders, riders, and motorcycle retailers has been overwhelmingly positive, so Tom feels that the project has been a success, especially considering the limitations of time, finance, and machinery available to him.

"There is nothing on the market like my solution that addresses the risk of injury and I may go on to patent my design in the future. Developing my hand guard in technology this year has been a real journey. I have developed so many new skills in design and manufacturing this year as well as building off the technological skills and knowledge I developed in year 12. Working alongside professional engineers and my other stakeholders as mentors has been awesome."

Mechanical engineer Vineet Rajasekhar was impressed with Tom's approach and outcome. "Tom has done extremely well and has worked through the design process like a trained engineer would," he says. "His project is a smart and innovative solution to a real problem."