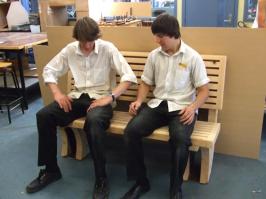 The students had considered various issues or clients they could work with and eventually decided on the HBRC Pathway Project. Their client, HBRC design engineer Neil Daykin, requested a recreational item made from timber to go on the pathway and they worked individually to develop a response to this brief.

Troy and Bradley both decided to develop a table or seating and researched designs and timber materials. They had to consider function, aesthetics, consumer need, and manufacturing criteria, as well as the particular requirements of the setting. Bradley and Troy visited the site to assess it, they looked at the best locations for installation and any additional aspects they would need to accommodate in their design. Because of the windy, sandy, salty environment, they would need to find timber that would be robust and durable, and they also needed to consider how to make their product as theft and vandal-proof as possible.

During the project, Troy and Bradley visited Opus engineers Robert Ferguson and Ben Baty who acted as "technical reviewers" at various stages.

Troy considered different styles for outdoor seating and tables, and looked at timbers in terms of strength, appearance, ease of use, and any finishing required. He was keen to use laminating as a joining technique and as this requires a flexible timber he conducted flexibility testing on pine, rimu, macrocarpa, and plywood.

While researching the site and suitable materials, Troy thought about various design ideas. Using Google SketchUp he developed four concept designs – three seats and a table. Each design included a curved element to reflect the shape of the bays and waves in the proposed environment. He asked other people, such as his classmates and family, for feedback on his concepts and then showed them to his client. Neil liked them all and gave Troy the go-ahead to choose which ones he wanted to develop. Troy decided on two of his seat designs.

While he was still considering timber options, Troy's teacher suggested that kwila would be a good choice because of its strength and durability. Troy researched this material and decided to test its suitability for his project by making a test joint from layers of kwila treaded decking timber. He removed the tread with a thicknesser and split the timber to make 5mm thick strips. Bending the strips was difficult and it took four people to bend and cramp four layers together, but the result was a curved piece of "incredibly strong" laminated wood able to hold Troy's weight when he stood on it. He was concerned that bending 30 layers to create the 150mm pieces he wanted might not be possible, but was reassured by his teacher that with stronger cramps and "a bit of effort" it could be done.

In developing his concept designs, Troy also had to think to think about ergonomics. His seat had to be low enough for children but not so low that it would be uncomfortable for adults. He also had to work out the best angle to allow water to drain off and for occupants to not only sit comfortably upright but also lean back and recline a little.

Troy kept in contact with his client at each stage of his development. He had decided, after talking with the engineers, to further develop his design to incorporate metal plates – to add strength and as a feature of the overall look. His client didn't like the look of the steel, so Troy shifted the position of the brackets from the ends of the seat to between the legs where they were less visible. 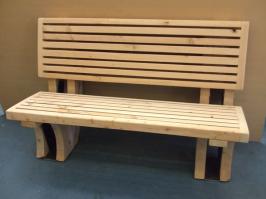 To cater for cyclists who might use his seat, Troy incorporated a bike stand. He designed the uprights at the back of the seat so that they formed a slot which supported the front wheel of a bicycle. Neil was particularly impressed with this feature of the seat and sought Troy's permission to send the idea to other councils.

After costing his design, Troy decided that kwila was too expensive and substituted macrocarpa. He made the legs narrower to reduce both weight and the cost of materials. Although the Opus engineers had advised against laminating curved layers of wood, Troy felt that this could still be an effective solution. However, he decided to use solid 75x50mm pieces which could be laid out and cut to shape more efficiently than curved lamination.

When developing his installation design, Troy had to allow for the slope of his chosen site. He decided to attach steel brackets, hidden between two verticals, to the feet of the chair so that they could be bolted into concrete footings and the angle adjusted accordingly. Troy developed a full-size mock-up of his final design to check that it was suitable for a variety of heights and sizes and decided that all the changes worked well.

Troy and his client were pleased with the final outcome, and having an insight into different kinds of engineering careers during the project helped Troy with his decision to study engineering – he is now in his first year at Canterbury University.

Bradley was keen to develop a swinging chair and suggested some ideas to his client. Neil liked his design but was concerned that because of its height it wouldn't be suitable for the location as it could prove a visual obstacle to people living next to the pathway. Bradley sketched a rough design for an alternative swinging chair with posts no higher than the seat itself, and Neil approved his going ahead with this. He also discussed the positioning of a swinging chair with a teacher who lived in the area. She liked the idea but thought that a swinging chair might attract too much attention and an increased risk of vandalism.

Bradley researched table and seating designs, and also joining methods, bolts and posts. Because the seat would be exposed to wind, sand, and salt he had to consider durability, especially the corrosive effects of salt on metal fittings. With the HBDC as his client, Bradley was aware that the council would be held responsible if a section of his seat failed and injured a member of the public.

Design concepts and a mock up

He sketched some design concepts and showed them to Neil who selected two for further development. Bradley made a 3D mock-up of his final seat design. He decided to add arm rests, as Neil had suggested, to stop skateboarders using the seat as a platform. This also "tidied up" the overall look, Bradley says, and added strength to the seat.

Testing the construction of the arm rest proved worthwhile when Bradley found that the macrocarpa wouldn't bend to the tight curve he wanted without cracking or snapping. He tried soaking it overnight so that it would absorb moisture and this seemed to work better but it still cracked. For the second test, he soaked the wood longer and also rounded off the edges of the blocks he clamped it into, to reduce the pressure of the corners on the timber. Unfortunately, the wood still cracked as the clamps tightened and the longer soaking made it too wet to successfully glue so Bradley decided to construct each arm rest from one block of wood.

Having decided to use 150mm macrocarpa slabs, Bradley consulted timber suppliers as to cost and availability. He found that most didn't sell this size and that it would cost $50 more than a standard100mm piece. He decided to change to this size as it wouldn't affect the design look or compromise the strength of the arm rest.

Bradley tested oils (Danish, tung, and linseed) and looked at some stains. Because some of these needed to be reapplied annually and would add to the council's maintenance costs, he decided to oil the seat once then let the timber weather and go grey.

When building his scale mock-up, Bradley found it was difficult getting the poles to stand straight and not move which reaffirmed his decision to sink them into concrete. He also decided that the two posts looked "messy and intrusive," so he needed instead two pivot points for the chair to swing from. The mock-up also provided an opportunity to test the comfort of the seat, and Bradley realised that the back rest needed to be made bigger both for comfort and because it looked out of proportion to the seat. However, he then found that the sharp swinging motion wouldn't be very comfortable. Added to this was the difficulty of making suitable, robust pivot points, so he decided to change his design from a swing to a fixed seat. 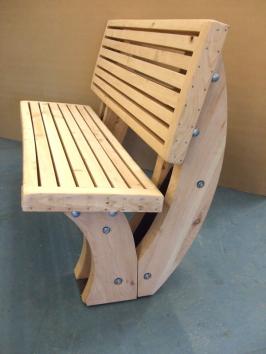 Side view of the seat.

Before installing the seat, Bradley had to think about his decision to sink the legs in concrete so that vandals couldn't undo the bolts. After Robert pointed out that concrete absorbs a high level of water, Bradley had to ensure that the timber for the legs was treated so that it wouldn't rot. He also inserted a rubber seal between the wood and metal to reduce the possibility of water getting into the wood. As he hadn't done welding before, Bradley learnt to weld so that he could make the metal brackets that would join the legs to the bottom of the seat.

Bradley and Troy's seats were installed on the Haumoana section of the pathway.