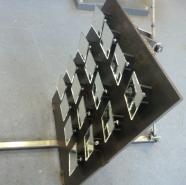 The annual solar power race at Trident High School certainly fosters innovation. Students not only strive to design a model solar water heating system that will outdo any previous year’s designs, but also want to design the winning solution for their year.

The models that have the best thermal performance efficiency are scaled up into potential solutions for domestic solar power water heating systems for the key stakeholder (usually the students’ parents).

For more information about the solar power race and the Energy Efficiency programme at Trident, see Sustainability: Domestic energy efficiency.

In 2013, students Alec Lilley and Brandon Young came up with some great innovations.

Alec’s “Solar death ray” was first equal with Brandon’s in the race, reaching the highest temperature (57.5C) in 70 minutes.

Alec’s design was based on a matrix of small mirrors attached to a base. The mirrors could be individually tilted to reflect the sun, and the base itself tilted using a tilting mechanism. This allowed for precision in focusing the maximum amount of sunlight onto an exact point on the black body holding the water. In addition, Alec had the idea of adding arduino-driven stepper motors to drive the mirror array to track the sun. Unfortunately, the time limitations dictated by the academic year meant the design could not evolve to this stage.

This model was not cost efficient when compared to other outcomes, but Alec argues it has two distinct traits that are highly desirable in a domestic solar water heating system – a high stagnation point and low heat loss.

Usually, in conventional flat panel design, the water will stagnate and cease to keep heating after a certain temperature – typically 65C. Mine doesn’t operate using those thermo-cycle principles, so in theory mine could keep heating up to boiling point, which is high for a solar water heater. It also has a very small absorber area, so when it is not being heated by the sunlight and the water is already warm, there is very little heat loss. 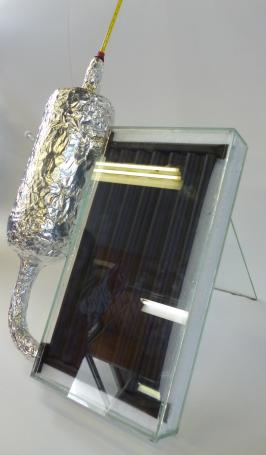 Brandon’s “Go cat” was an aquarium system that encased the collectors in glass. This system won awards for both thermal performance efficiency and for the highest temperature (57.5C) reached in the 70 minutes of competing time.

Corrugated absorber plate
Unlike a flat plate, it has absorber surfaces that are square to the sun, regardless of where the sun is positioned in the sky, because of the corrugations. (This concept was inspired by a student’s design the year before.)

Glass enclosure
Brandon’s design allowed light in from directions other than directly through a restricted window aperture above the absorber plate. The design may have been capturing reflected light from other building structures, not just directly from the sun.

Another innovative idea was the corrugated manifold Brandon designed. His aim was that the corrugation and the greater riser tube area would allow for a greater flow, and therefore achieve a higher temperature. This meant he would need to have a larger manifold because he wanted the area inside the riser to be a little smaller than in the manifold to allow "clean flow".* 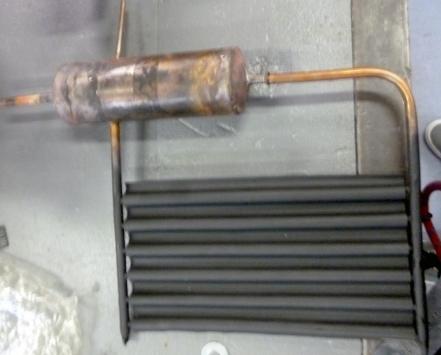 Brandon wanted an array of riser tubes connected to the absorber plate (this plate absorbs the sun’s energy and conducts resultant heat into water inside the tubes, causing the resultant hot water to “rise”, creating flow) which in total had an internal cross-sectional area less than or equal to the manifold internal cross-sectional area (the riser tubes feed water into a common manifold tube that takes the hot water to the hot water cylinder).

He also wanted the cross-sectional areas (of riser and manifold tubes) to be larger than usual in order to create higher flow rates and therefore more transfer of the hot water into his hot water cylinder.

Brandon could appreciate that if you have larger pipes you get higher flow rate. But there’s no point in installing large riser tube diameters if your common manifold diameter gives an area less than the sum of the riser tube areas because the manifold will restrict the flow that the riser tubes can create.

*“Clean flow” relates to “laminar flow” – which consists of no turbulence (to aid a high flow rate), tidy pipe joins (as visualised internally in pipes), and radiused bends not sharp bends.

The students collaborated extensively with their teacher Dave Dobbin during this project. Dave has a background in designing and installing energy efficient water and insulation systems.

Both Alec and Brandon also saw collaboration with their fathers and other experts as key to the success of their outcomes.

Brandon and his father (a key stakeholder) both wanted a design that was economical and aesthetically pleasing. If the design was successful, it could be developed into a full-scale outcome that would enhance the value of their family home.

Brandon’s father runs an earth moving business in Whakatane. He gave Brandon extensive feedback on his designs, encouraging him to be innovative in his ideas. One of the innovative ideas Brandon modelled and received feedback on was the corrugated manifold he designed.

Brandon has a part time job after school at his father’s workshop and works on the shop floor with two mechanics, learning about fabrication and repairing and servicing trucks and diggers. After working there for three and half years, Brandon has developed understandings of working with metal and mechanical engineering skills and knowledge. He has also taken metal technology at Trident from year 11.

Year 13 was the first year Alec had taken metal technology. However, because he had worked in his father’s workshop for many years, he was familiar with the school workshop equipment.

Alec's father also collaborated extensively with him during the development of his outcome.

Alec’s father has a good understanding of mechanical engineering. He installs, calibrates, and maintains the instrumentation and control systems on various power plants for several different types of power stations in the Whakatane region. He also has a workshop at home and is a model railway enthusiast.

Collaboration makes me think in a more extensive manner. It’s important to help develop multiple ideas. I started off with the idea of using a television satellite dish and needed some way of making the surface reflective. I was fixed on this idea of polishing and electroplating it. Then the chemistry teacher said, “Why don’t you use silver nitrate and make it into a mirror?” Then Dad said, “Why don’t you put on small mirrors and fix them at a certain angle?” It was great to argue about and discuss the designs as it always helped the design progress.

Extensive modelling was another key feature of Alec’s and Brandon’s projects. Both students drew concepts, discussing these with their stakeholders and experts to determine the best direction for their next stage of development. 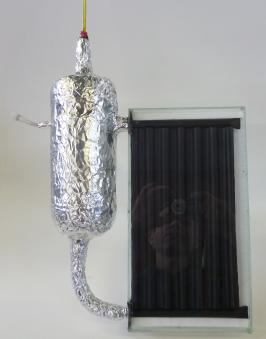 In addition to modelling and trialling the riser tubes and manifold, Brandon carried out functional modelling – testing various types of glass to determine which was the most effective transmitter of light. The glass had to be toughened glass so that it met building requirements.

The method of joining the glass case was important both for maintenance purposes and aesthetics. After trialling glue, Brandon decided to use a glazing tape because it was less noticeable and did the same job.

Alec spent some time redesigning the collector tank. A method was suggested for constructing a water tank, but for his system the tank was the absorber as well as the water storage system. Therefore, instead of braising the end caps onto the top of the cylinder sidewalls (as would usually be done for a water tank), he trapped the end caps inside the cylinder using large hose clamps at the ends so that the end caps were encapsulated in the unit. This provided a slightly stronger structure – with a flat surface that was also better to focus the light on.

Initially, Alec trialled several crude systems to tilt the individual glass mirrors in order to concentrate the light into a focal point on the absorber. One of the systems was using blu-tack to fix the smaller mirrors onto a satellite dish, and then tilting each mirror to a focal point.

The final design he used was much simpler and easy to construct using simple screws and a spring. In addition, Alec designed a mechanical tilting mechanism for the back plate. This mechanism was a later addition, designed with consideration of the materials available. Alec sketched it first and then consulted with Mr Dobbin about the design. After he’d fabricated some of the basic parts, Alec clamped them in situ before any welding or screwing so that he could perfect the placement before assembly. 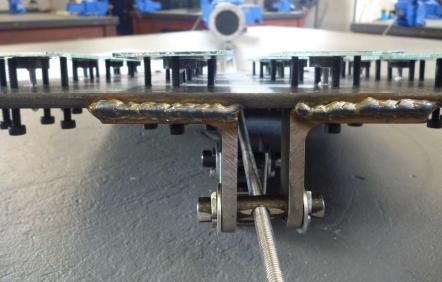 Alec also used mathematical modelling to predict the number of rotations required of the tilting mechanism in relation to the angle of the sun above the horizon. He suggested “the resultant formula could be programmed into a microcontroller in order to track the sun to keep the system continuously focused.”

Different insulation materials were also modelled and tested for the insulation of the absorber. Testing showed little difference between glass fibre and plastic fibre. The final decision to go with recycled glass fibre from an old building was based on its performance, environmental impact, and legal requirements.

The fact that the glass fiber would cope better with a higher temperature meant it would comply with the NZ Standard 2712:2007, clause 4.5, which states that the collector must resist and cope with stagnation conditions and also be able to cope with dry conditions. The nature of the point-focus parabolic reflector design is the high temperature at the focal point. If the absorber were to run dry or stagnate, the whole assembly could get extremely hot, which could cause plastic insulation fibre to melt. 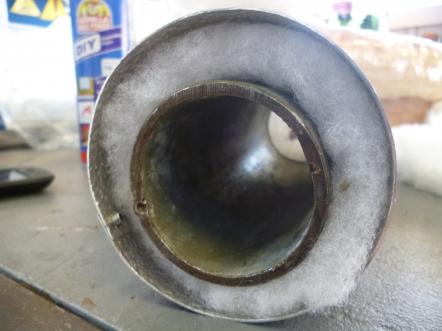 Even though at times Alec wished that he “had scrapped the design and gone with a simpler outcome”, he found the project a huge learning curve. He particularly enjoyed the distinct processes of research and development, which are seen in authentic technology projects, and the key importance of functional modelling and the associated testing.

It was absolutely fantastic picking up metal workshop at year 13. It involved physics, mathematics, practical skills, and the technological practice skills of planning and development.

Alec plans to attend Auckland University to complete a computer systems engineering degree. He is hoping to focus on power and automation systems.

Metal technology has been Brandon’s favourite class all the way through his secondary schooling. The mix of written and practical work and design has particularly appealed to him. He has applied for an apprenticeship at Kawerau Mill as a mechanical engineering apprentice. This work involves maintenance of the mill machinery.

He has also particularly enjoyed and learnt a lot about energy conservation in his home.

The success of these two students is a good illustration of subject choices in senior secondary giving them access to their preferred careers. Both boys took part in the same metal technology programme, alongside other subjects that would allow them to follow their particular career interests.

I’ve always been interested in a wide range of engineering and technical design. Year 13 at Trident did not have compulsory subjects, so I thought this would be a good opportunity to gain some skills and qualifications doing something I love. Metal technology with Mr Dobbin was one thing that made year 13 very enjoyable for me.

This year [2013], I’ve reverted somewhat by reintroducing core unit standards into my course, which forces me to still teach a good, sound base of core metal workshop skills (marking, measuring, hand tools, power tools, and so on). The students now get to choose from a range of standards to suit their intended future path of study.