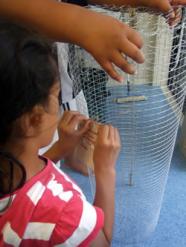 Teacher Ruth Lemon describes how the project came about: "We were building up to a Year 6 to 8 leadership camp at Kokako Lodge in West Auckland, so we got the tuākana (seniors) to investigate using things in the camp area and their research showed there was potential for eeling."

The students first studied a completed hīnaki that Ruth brought into class, taking note of its structural and material properties. Research was then carried out on the traditional materials, techniques and processes for creating hīnaki, as well as the socio-cultural importance of eels both in New Zealand and overseas.

The students' research involved sourcing teachers and local experts, using resources such as the Uia Ngā Pātai Any Questions website.

As well as helping with the group's hīnaki designs, this research informed the creation of an art installation where the completed hīnaki were the central pieces, complemented by individual collage and clay sculptures. This art exhibition was held a week before the camp..

"The exhibition allowed the students to share their research with the whole school, in terms of the eel's body with the clay sculpture and the importance of the eel worldwide as a food source with the collage pieces. It also highlighted the role of hīnaki as pieces of art, as well as tools", Ruth says. 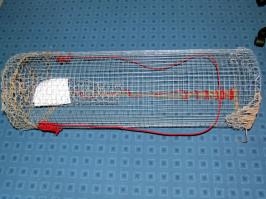 Each student then developed individual design drawings for a proposed hīnaki. They then shared their designs in groups of four or five, working together to refine their ideas until each group agreed on a final design.

"First they had to figure out how they would secure one end of the hīnaki with a hinge so that they would be able to first bait the trap, then get the eel out, while the other side needed to be firmly attached and have a funnel that the eel would go through".

Hīnaki are traditionally made with kareao (supplejack) a twisting vine found in lowland forests, but as this wasn't readily available, the groups carried out online research into the best modern materials for the job.

Although each group had differences in their designs, the main materials chosen were a variety of wire mesh sourced from The Warehouse. For stronger structural elements, such as the outer cylinder of the trap, some groups used galvanised 2.5cm steel mesh. For more intricate elements, such as the funnel and the hinged doors of the trap, thinner chicken-wire mesh was chosen for its increased flexibility. 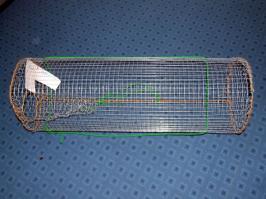 Designs and materials ready, the students began construction. Using wire cutters, the students cut the lengths of wire mesh they needed to form the main tube of their hīnaki. To form the tube, the groups first bent the end of the wires with pliers so that the two sides could hook together. The students then reinforced this connection with strong cord, winding it through the gaps in the mesh along the entire length of the tube.

The funnel and end hinge were more intricate components and the students went through a period of trial-and-error, cutting and refitting the chicken-wire until it functioned correctly.

The students then tested the strength of their traps. Without access to a river at the school the students came up with some imaginative solutions.

"The students' thinking was that if the hīnaki could stand up to a high-pressure hose then it would be able to stand up to the river currents", Ruth says. "They also threw them around a little bit on the school field".

The students found that some parts of their traps were failing under the strain, so extra wire and cord was used on the seams and hinges to reinforce the strength of the traps.

Once their hīnaki were completed, the students researched the best bait for the traps. Any bait the students used would have to be easy to place in the trap, attract the eels from a distance and not dissolve too quickly in the water. Most of the students decided on a mixture of bacon and bloodworms though dog roll was also trialled by some groups.

At the end of term, the class arrived at Kokako Lodge eager to trial their hīnaki in the nearby stream. The students first placed their bait in a tied up plastic bag with puncture holes. This kept the bait secure in the hīnaki while allowing the scent of the bait into the stream to attract the eels.

The students then carefully placed their hīnaki in the stream, secured them in place with ropes so they could be hauled to shore later, and left them there overnight.

The following day the students found that two of the hīnaki successfully caught eels, one was empty, and another had been swept out to sea.

"The rope that group used wasn't strong enough so they were very sad about that", Ruth says. "But the key things the students came back to me with was that in future they needed to make a fool proof system for securing it to the riverbank and that the funnel on one of the traps might have been too small for the eels to get in".

Though disappointed, the groups that didn't trap any eels decided to extend the project using other forms of fishing they had discovered in their research.

"One method was similar to a hook-and-line. They also tried a stick with a hook fashioned on to it that was more like a spear and two of our boys managed to catch something with it".

Once all the eels were retrieved, the students were taught how to skin and prepare the eels for eating by teacher Anaru Martin. The eels were then smoked and eaten by the whole class.

Ruth reports that playing with and preparing the eels was a real highlight for the students at the end of the project. "I think they were also pretty stoked to see that their traps actually worked".