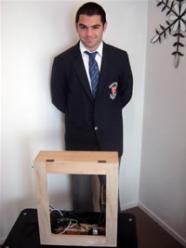 Hussam designed and built a device that automatically opened and closed windows to maintain a desired room temperature, for which he gained a 2009 Transpower Neighbourhood Engineers Award.

Hussam's client was his father, who often had his sleep disturbed by fluctuations in temperature that occurred during the night, especially in Auckland's semi-tropical climate. Hussan looked into the pros and cons of several possible solutions to this problem – from conventional heating to air conditioning units – and found that simply opening and closing a window proved to be the healthiest, cheapest, and most effective option. The challenge was to successfully automate this process, so that a set temperature could be maintained in the room without human interaction.

Hussam talked to engineer Luke Fowler to see if there was potential in the idea. On his suggestion, Hussam created a questionnaire to determine whether there was a market for the device before he started. The participants served as Hussam's "second client" and the data he gathered was incorporated with his father's requirements.

This led to a very clear set of specifications for the final brief early on, the most important being that the device should successfully maintain a set room temperature, be quiet enough that it didn't disturb sleep, and be safe and compatible with existing security devices. Hussam also determined that the device should be reasonably small and unobtrusive, have a simple manual override function, and be priced between $120 and $200 to remain competitive against solutions such as a home ventilation system.

Hussam's data showed that awning windows were the most common, so he planned his design for that window style in order to "formulate a useful solution for the majority of New Zealanders". He then tested a number of different awning windows with a Newton meter, determining the average force required for his device to open and close a range of different window sizes.

Hussam faced a setback at this point when an internet search found a similar product available from a German manufacturer. Concerned that his idea would be redundant, Hussam researched the product and emailed the company. Fortunately he found that, while the concept was similar, the German product was designed for industrial rather than home use.

Reassured, Hussam carried on with his project, looking into a variety of different mechanisms to open and close the window. He decided that a rack and pinion mechanism would work best with the awning windows, as it was small enough and gave the right amount of linear force. Hussam chose a worm-driven rack and pinion over a direct drive, as this system opened the window at a steady, safe speed and provided enough torque without the need for a larger motor or extra gears.

Designing and developing the control mechanism

The control mechanism for the drive proved to be a far more complex issue. Hussam's first idea was to use mechanical switches with two thermostats taken from oil column heaters, but he found that the thermostats responded to the internal temperature of the heater rather than ambient temperature, and that they were bulky and difficult to modify. 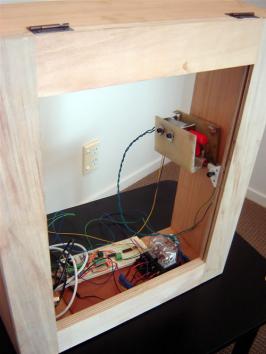 Hussam consulted with an electrical engineer who suggested a series of relays to control the movement of the motor back and forth. For the temperature control, Hussam talked to software engineer Spencer Travers who suggested using a PICAXE 08M microcontroller with temperature sensors.

"By using a microprocessor, the size of all the electrical components was significantly reduced. The microcontroller acts as the brain of the system and is connected to the temperature sensor, detecting whether the temperature is high or low, then sends a message to the relay system to either turn the motor clockwise or anticlockwise as required."

Changing from a mechanical to an electronic system gave Hussam's mechanism far more accurate responses to temperature, while taking up far less space. However this choice required Hussam to develop a range of new knowledge and skills, including the fundamental circuitry to create the relays and ensure that the appropriate voltage went to the different components from the 12 volt mains power source, and learning Microsoft BASIC to program the microcontroller unit.

Hussam's finished prototype has received extremely positive feedback for its rapid response to temperature fluctuations and its full automation. His unit is also compatible with most standard security features, an important issue for many people who expressed interest in the device at an early stage. Hussam sees great potential for the prototype if developed further and feels it would be of particular value for elderly or disabled persons.

I have found the experience of mentoring Hussam with the design and construction of his automatic window opening device very rewarding. Hussam's creativity and enthusiasm was contagious throughout this project and it was great to see a student working on a real life problem and coming up with an economical and practical solution. Hussam would first research the topic for himself before seeking advice and then he would follow through to his own conclusions, which was great to see!

Hussam's learning curve has been very steep for this project. From virtually nil experience with electronics he has picked up a lot of skills very quickly, learning to solder and draw electronic diagrams and enough programming language to program his chip. He has had to overcome some set-backs and at times it has taken a lot of energy to keep on going. Hussam's attitude throughout the project has been exemplary and I am convinced he has what it takes to become a good engineer.