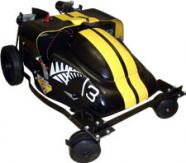 Kevin regularly mowed his grandparents' lawn using their electric mower, but felt that the system could be improved. The cable was problematic – it constantly needed moving, requiring his grandparents to walk on the freshly cut grass, dangerously slippery for the elderly, and wasn't long enough so that one corner of the lawn had to be cut by hand. Kevin was also becoming increasingly busy with his studies leaving him little time to help out. After considering several different solutions, Kevin decided a radio-controlled mower could solve the cabling issues and allow his grandparents to mow the lawns themselves with little effort.

Kevin began researching whether such a product existed. Although he was initially disappointed to find several existing versions of the concept on YouTube, he found that none of them were electrical, a crucial point for his ecologically-minded grandparents. Seeing a niche here, Kevin decided to design and build a radio-controlled battery-powered mower himself.

Kevin began researching his project and the necessary components and quickly realised that he needed a substantial budget for the project. Sponsorship seemed like a good solution so he emailed several possible prospects. Lawnmower company Briggs and Stratton came to the party and offered one of their basic models which included the body, blade and battery that Kevin could modify. Further funding for the project came from TV3 and, most surprisingly, Prime Minister John Key, who agreed to provide the remaining funding for Kevin's project.

Construction of the unit started with the remote-control circuit. The remote control chip that Kevin chose used an Xbee processor with which he was unfamiliar, so he had to learn how to program it. He was initially concerned that the large amounts of electromagnetic noise produced by the motor would interfere with the chip's signal if they were too close together, but testing showed that the high frequency used by the Xbee meant this was not an issue. Kevin then added some safety features such as a "dead man" switch and then began modifying the lawnmower, building a frame around it so the whole unit could be moved up and down, before putting all the separate components together. 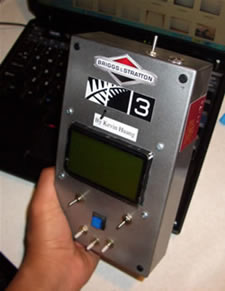 Things didn't run smoothly through this process however as the electronic components used had a range of different voltages. Kevin eventually got around this issue, using "heaps of regulators" on his circuit board to make each component compatible. He used separate batteries for the blade and the driver motor so his unit could do one-and-a half-hours of mowing after an overnight charge with a regular household power socket.

A far bigger issue was making the mower's driver motor move both forwards and backwards, as the windscreen wiper motor he used was designed to go in only one direction.

"I forced it to go the other way even though it's not supposed to and it got up to 70° Celsius in two seconds and I thought "that's not right". I then realised there was gearing inside that switched it to go in one direction so I took out those parts and connected it straight to the motor. It took me two weeks to actually find out what was happening as, like a generator, it actually induces voltage when you force it to go the other way and this high voltage coming in nearly destroyed my whole circuit."

With these concerns eliminated, Kevin did some final testing to make sure everything was working together as a whole before building and installing a cover.

The finished unit has solved his grandparents' problem and they are extremely happy with the result. "They can now mow the lawn while sitting down in the shade having a cup of tea and listening to music," says Kevin.

Kevin feels that he has learned an incredible amount going through this process, from skills picked up from Technology classes such as programming, circuitry and welding through to networking and communication skills that assisted him so much in getting funding and exposure for his creation. For those interested in studying Technology in school Kevin has nothing but encouragement.

"Definitely go for it! You can research and get into the stuff that you like at school and because it's fun it's not like you are forced to study because you really want to do it." 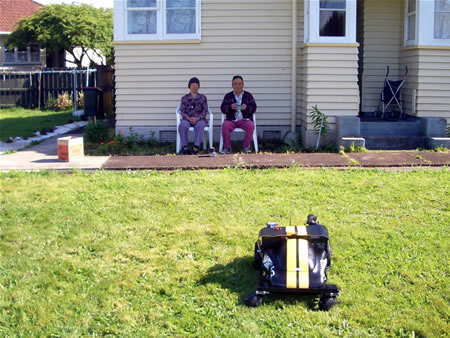