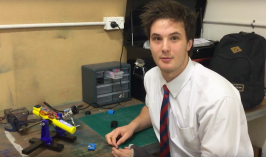 Like all pāua divers, Mitchell had to measure the pāua to ensure he was following strict size regulations. However, pāua are haemophiliacs. When they are removed from rocks, they can be damaged and bleed to death, or never clamp down on the rock again.

Mitchell wondered whether he could develop a tool for measuring pāua in their own habitat without having to pry them off rocks.

A project of intense interest to a student is a natural motivator. This project offered Mitchell a real life context to learn and develop skills and knowledge as a technologist during his year 13 technology programme.

The initial design was based on the concept of using ultrasonic sensors to measure the distance away from the pāua, and then using trigonometry to calculate the distance between the two laser points that were on fixed angles.

However, the fast movement of the water distorted the ultrasonic readings, creating unreliable data.

The second approach was to use an array of lasers that were parallel to each other scanning through the array to measure the different pāua sizes. 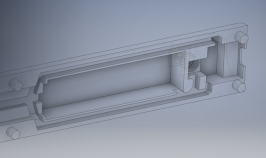 This project required extensive functional modelling. CAD (computer-aided design) and a 3D printer were used to design, model, and test the prototype as it developed.

Mitchell's teacher, Stephen Newnham, noted that this project really tested the limitations of 3D printing in terms of its tolerances. To obtain accurate measurement with a laser array required miniscule adjustments to components following testing. It was sometimes difficult to achieve this degree of accuracy on the 3D printer using polylactic acid (PLA). (However, PLA did meet the requirement of being fit for purpose in its broadest sense because the plastic is biodegradable.)

The laser beams had to exit the device at exactly 90 degrees. The plastic expanded as it cooled down. Calculations for adjustments to small components had to take this into account.

Mitchell and Stephen noted that the 3D printer was an excellent tool for rapid prototyping and proof of concept. However, they are also both very aware of the strengths and limitations of 3D printing. They believe that if the tool went on to be manufactured, CNC technology would probably be needed to create some parts from metal rather than plastic, as well as injection moulding to improve accuracy when creating various components. Stephen is interested in exploring the use of other materials, including composites, to expand the options when students are carrying out rapid prototyping such as this.

Fitness for purpose in its broadest sense 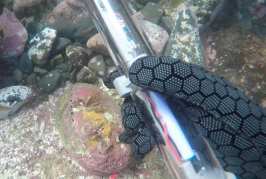 The tool needed to be fit for purpose in its broadest sense (a requirement of level 8 of the technology learning area) including not compromising the safety of the diver by being too heavy or difficult to operate. Mitchell also wanted to develop a tool that would be accessible cost-wise to all divers. Costs were kept down by purchasing cheaper components that required more coding and parts were also recycled whenever possible.

Mitchell initially deconstructed the housing of a diving torch and used this as the starting point for the waterproof housing. This provided ideas for what is suitable and safe for a diver to carry underwater and gave Mitchell an idea for the type of switch to use in the tool. A physical switch is not suitable underwater because it requires a seal and this can be easily breached by water. Instead, Mitchell used a reed switch, which is two small metal rods enclosed in a glass capsule. A magnet is incorporated into a spring loaded switch which rotates around and passes over the reed switches. This is the way the diver interacts with the tool to switch it on.

A lot of the initial testing was carried out in a fish tank until the waterproof housing was resolved. 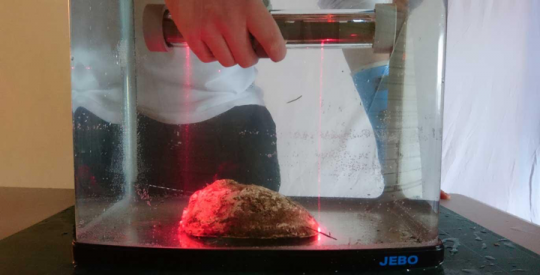 Once secure waterproof housing was designed, several divers trialled the tool in the ocean.

In the previous year, the school had begun assessing achievement standards in the materials technologies programme. Industry training organisation unit standards had been used previously. The school sees advantages in offering both programmes to their students. It offers dual career pathways to students and also allows students access to the higher grades (merit and excellence) available through achievement standards.

This project provided credits for Mitchell in the following standards:

As part of the ASB Bright Sparks award Mitchell created a presentation of the project. This contributed  evidence for the DVC achievement standard below:

When tested in situ, Mitchell's measuring tool proved to be a faster way of measuring pāua than the traditional method of removing the pāua. Interest has been expressed by commercial firms in taking the design to the next stage, with the possibility of mass production. 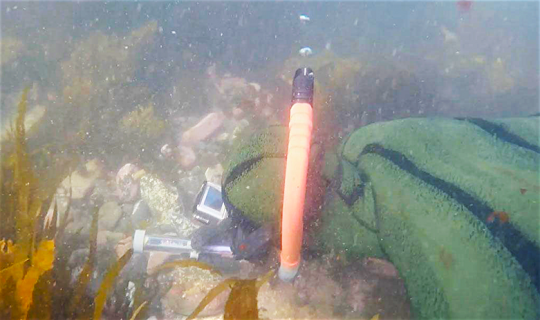 When students come up with an original product that has commercial value, it is important that they protect their idea. Mitchell has been given legal advice on the way to protect his design. He has taken out a patent on the design and has also created his own company. He is currently discussing the possibility of selling shares in his company to a design and manufacturing company who are interested in developing the tool further.