Adam Gorrie was keen to enter for scholarship examination. Technology scholarship examination requires students to develop an innovative and elegant technological outcome that addresses a complex situation. Adam developed Axl – a mechatronic dog that was a loving, faithful companion for Elsa May in the one-woman play, My Brilliant Divorce. Axl won Adam Top Scholar (Technology) for 2013.

Through this project, Adam developed new skills and knowledge in mechanical engineering and electronics, and significantly improved his planning skills. These planning skills are proving to be particularly useful in his studies at Otago University, where he is now studying product design.

Lewis Ablett Kerr, who had been directing and producing theatrical productions in Dunedin for almost 20 years, asked his nephew Adam if he could create a mechanical dog ("Axl") for his next production.

When Adam was in year 11, his teacher John Maguire had suggested that he would be a likely candidate for scholarship. Keen to pursue this goal, Adam knew that selecting the right project would be the key to success. Axl turned out to be just what he was looking for.

This project allowed for interaction with a wide-range of stakeholders: the producer and actor; Technology, Electronic, and Physics teachers; and electrical engineers from the Futureintech Ambassador initiative. The project also:

Adam met with Lewis at the theatre and established the initial brief. Axl had to manage a full range of movements: walk forwards, backwards, left, right, spin on the spot, and hold a scroll in his mouth. He also had to interact with the actor throughout the play.

With the initial brief established, Adam had to identify the technological practice to be undertaken: from initial design ideas to realisation of a fit-for-purpose technological outcome. 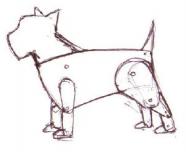 Lewis suggested that a white Cairn terrier would be ideal for the Axl . Adam used Photoshop to sketch his initial design ideas and, once Lewis was happy, to sort out Axl’s joint placement. Adam developed paper models of various sizes and then met with Lewis at the theatre to determine what the finished size and shape should be.

Adam then carried out extensive research to determine which materials would be most suitable for the different parts of the dog.

“The materials used in the construction of the dog needed to be light and durable to take any unwanted pressure off the moving parts, yet sturdy enough to ensure that it did not break under its own weight.”

Existing mechanical dogs provided a good starting point. A wooden mechanical dog gave Adam ideas that he was able to use when designing Axl’s jointing system.

Adam used functional modelling to determine the most suitable materials and joint types, settling on a combination of materials that included foam core board, dense foam board, medium-density fibreboard (MDF), plastic, and pine.

A key challenge was the design and manufacture of the base.

“Structurally, the base had to support the whole dog and all of the electrical and mechanical systems. It had to be an unobtrusive part of the design, confined to an area no bigger than the maximum dimensions of the dog.”

In addition, the base needed to allow the dog to walk and turn on the spot. Adam trialled various systems and identified the strengths and limitations of each type. Mr Maguire then arranged a meeting with Peter Cowan, an electrical engineer with Delta and a Futureintech Ambassador.

“Instead of using a gearing mechanism to link each leg to the main motored wheels, he suggested using some sort of pulley system to reduce the amount of gearing that would be needed. Doing this greatly reduced the amount of precise mechanics I would have had to design and manufacture.”

Peter also advised Adam on the type of motor to use to reduce the set-up time and expertise required.

Adam had to develop a large number of mechanisms to ensure that Axl could perform all the required movements. These movements included a bobbing head, a moving tail, an opening jaw, sitting down, and walking in multiple directions. Adam followed a methodical approach: sketching concepts, seeking expertise as necessary, sourcing suitable materials, and constructing and testing each mechanism using functional models.

Another major problem to be resolved was the durability of the motor rig.

“Being initially made out of pine, it started to deteriorate and lose its grip on the motors when it was just being pushed along the ground by hand. Because pine is very soft, it doesn’t hold a thread well, and so the rig could not withstand being assembled and disassembled repeatedly.”

With the guidance of his teacher, Adam redesigned the rig using a plastic block.

To allow his motor and battery to communicate with the remote control, Axl required a circuit board and the appropriate electrical componentry. David Mulder, another Futureintech Ambassador from Delta, gave Adam guidance in circuit board printing and programming. 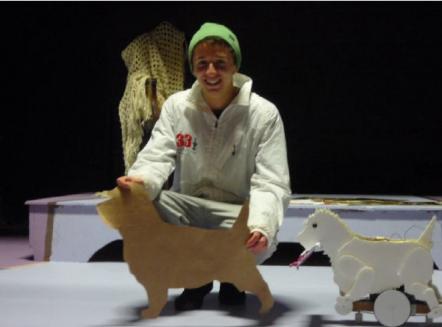 Testing the models in the theatre.

Adam used functional modelling extensively to test his mechatronic dog in the theatre environment to ensure that it would look the part for the audience. All members of the audience needed to see Axl no matter where they were seated. They also had to see him even when the lighting was dim. The size and colour were finalised only after thorough testing at the theatre.

Unlike most school Technology projects, Adam’s project was subjected to a very public evaluation by an audience for two hours a night over eight nights. Above all, Axl had to be reliable. Adam was acutely aware of the embarrassment that Lewis and the actor would experience if Axl refused to perform on the night!

Given that the dog was a technological system that combined mechanical, electronic, and communications technologies, reliability was always at the forefront of Adam’s mind. He found himself continuously evaluating his practice to ensure that his technological outcome would be fit for purpose.

“Axl the dog is an ingenious remote-controlled device that whizzes around the stage, responding whimsically to Angela's confidences.” Theatreview, 26 August 2012.

Axl’s remote control system and associated handset had to work continuously for two hours at a time – the duration of the play. To avoid having to replace the batteries after each performance, Adam used a rechargeable sealed lead battery as recommended by Futureintech Ambassador Peter. And he chose a radio–controlled system over an infrared-controlled system because he found that theatre lights and other props could interfere with a light-based system.

The handset was deliberately designed for ease of use. Because of its intuitive operation, Adam’s father had no trouble controlling Axl for two performances of the play while Adam was off sitting exams.

Prior to developing Axl, Adam had not worked on a project that required so much consultation and consideration. 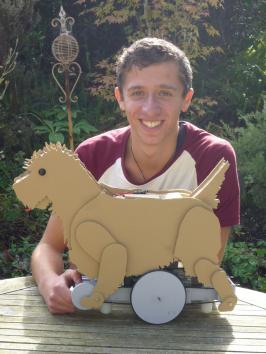 Axl the dog - the finished product.

“The challenge was communicating all of the ideas in my head to the stakeholders and making it clear to them what I wanted to do. When I was talking to the electrical engineer, the discussion was mostly based around calculations, using technical language and diagrams. With my main stakeholder Lewis, the communication was more about the design, so I would show him my ideas in a more visual manner, and take the technical information out of it. With Mr Maguire, my teacher, it was a bit of both.”

In conclusion, Adam’s Axl closely met all the requirements of key stakeholder Lewis. Evaluation of both his final technological outcome and the practice undertaken to develop it confirmed fitness for purpose in its broadest sense.

Mr Maguire noticed that Adam’s planning skills developed during the project. This is standing Adam in good stead at Otago Polytechnic, where he is now studying product design.

“Time management and planning were quite crucial. I have learnt to start on a project early and to be fairly precise about timetabling so everything is planned out to make sure I work efficiently. Tertiary study requires a lot of self-sufficiency. I am also doing project-based work again.”