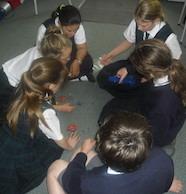 How can I introduce the technological systems component to my year 6 class in term four? 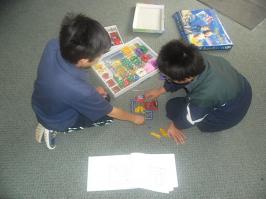 The learning experiences developed in the successful examples all focused on exploring simple systems initially and clearly defining what a technological system is and how it differs to other types of systems.

This teaching snapshot exemplifies this approach. Students looked at multiple systems and began simply. For example, on their initial examination of a toaster as a simple technological system, students saw the inside of the toaster as a black box. As the students’ understandings of the electronics grew, they were able to understand more of the internal workings of the toaster and hence increase their overall understanding of the complexity of the technological system.

Dorothy Hutton at Columba College had carried out an audit of technology curriculum coverage in the last five years in the junior school and realised that her year 6 class had not covered the technological systems component. 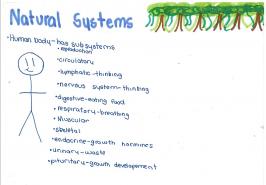 Students were first introduced to the concept of systems generally and the different types – social, natural, organisational, and technological. They thought of different systems they knew and classified them using a chart titled “What type of system".

Before focussing in on technological systems, Dorothy decided she would build up students' understandings of systems generally by showing the students different systems and using the language of the technological systems component up to level 3. This included exploring components, inputs, outputs, and transformation processes and controls. If examples arose, she also hoped to introduce the understanding of  “a black box”.

For more about the audit and technology curriculum coverage at Columba College, see Tracking coverage and learning across a school.

The library as an organisational system

Dorothy initially organised some lessons in the library to explore the library as an organisational system.

She discussed with the librarian the vocabulary the students needed to understand and how this could be exemplified within a library system. They shared the teaching, asking students:

On the second visit the librarian talked about the Dewey system and had the students filing and finding books using this system. They also talked about the fact that libraries used other systems.

Students recorded their understandings of the library as an organisational system using their new systems vocabulary.

Back in the classroom Dorothy used an image of technological systems from Ideas for Technology in New Zealand Primary Schools to begin to use the words inputs and outputs.

She used this to discuss the diagrams of a train and telephone showing the inputs, and outputs in a technological system.

Next, students discussed the computer as a system. This provided an ideal vehicle to introduce the concepts of black box and also initial understandings about subsystems. Students were beginning to understand that:

Useful sites for resources or information to support these discussions included:

A car wash was used as an example of “where you can see inside the black box and what goes on in the system”. The students became familiar with the different types of car washes, drew a car wash system, and then looked online at pictures of car washes. 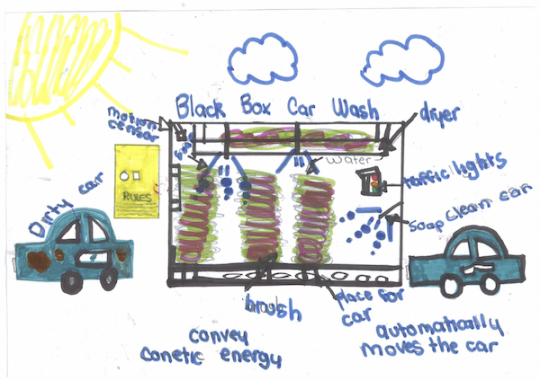 Control mechanisms were also discussed in this context. Dorothy asked the students: "What changes in the car wash if you have a bigger car or a smaller car?"

Some of these images were added to a worksheet requiring students to describe the advantages and disadvantages of a black box system.

The students examined diagrams of electronic washing machines and noted the advantages and disadvantages of their particular black box.

Dorothy used the science unit she was teaching to focus on different body systems. Students investigated a different human systems and then taught each other about them.

They used a list of systems and an activity from ScienceNetLinks for identifying parts of the body system.

Once the students had identified body systems, Dorothy also discussed several other natural systems, including photosynthesis, ecosystems, and taxonomy. With 11 systems identified, the students were placed in groups of 2–3 and given a system to research. They then had to teach the rest of the class about their system.

A quiz identifying the key understandings each group needed to find out for their particular system was provided online. This helped focus each group’s research. Once they had completed the research, Dorothy gave the students the quiz answers to check against theirs.

The Life Education Bus was also visiting the school and this added to student’s understandings as they discussed the already familiar respiratory, digestive, and circulatory systems.

Another opportunity to embed systems understandings was provided by a visit from the fire service, which was planned as a part of a health and safety unit. Dorothy had asked them to talk about materials, the changes that had occurred in technology in the fire service over time, and systems. 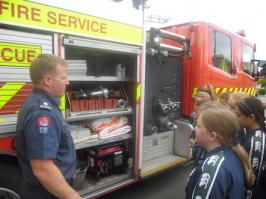 They brought the fire truck and gave the class extra time because they were interested in this technology focus.

The firefighters talked about the newer technological systems they have available, for example, the breathing apparatus (BA) set. The entry control officer (ECO) can now request firefighters wearing a BA set to withdraw from a situation with the push of a button on the Merlin board. The Merlin board provides a means of remote two-way digital data and alert status communication between the wearer of the BA set and the Merlin board, which is generally located outside the property.  An alarm goes off on the hand-held beeper (PASS alarm) which displays a man running across the screen to indicate that it is imperative that they leave the building immediately.  In the past, the only way they were able to tell them this was to turn the fire truck sirens on, which may or may not have been heard outside.

A toaster as a technological system

Dorothy considered the students had enough systems knowledge now to focus on a technological system – a toaster.

To see where students’ understandings had got to, Dorothy gave the students a worksheet on a toaster and asked them to identify the various components of the toaster system. 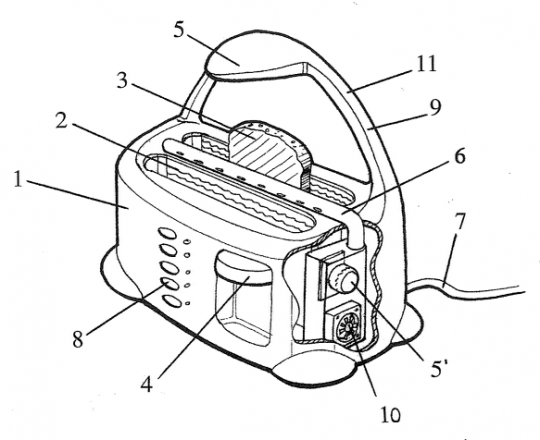 They then looked at a toaster in class and identified the parts of the system and what might be the “black box” in a toaster.

Dorothy put an enlarged image of the insides of the toaster up on the classroom wall. The illustration named the mica sheet and electromagnet – terms neither the teacher nor students had looked at before. Dorothy researched these terms and discussed her findings with the class. She had become quite comfortable with both teacher and student understandings growing together as she taught the technology curriculum.

Inside an electric toaster

The class had recently covered the technological products component and students were able to describe some of the performance properties of the components within the toaster. From a previous science unit they also knew the names of various metals from the periodic table.

Students went home seeing the toaster as transparent – they could visualise what went on inside. They could imagine as they pushed down the lever they could see it connecting with the electro magnet and then see the electrons racing through the nichrome wire. They knew that the nichrome wire had been chosen because it is an alloy made from nickel and chromium, which has a high resistance, that is why the wire heats up.

There were many other discussions on the components of the toaster and the different types of toasters students had at home. Students were coming in daily bringing their new toaster understandings to the class:

I am sure we don’t have a crumb tray!

Mrs Hutton, it does have a crumb tray and it was full of all this stuff!

We have a toaster with two crumb trays!

The students discussed in some detail the different settings on their toasters – thinking about how they worked. For example, one student talked about the crumpet setting. The students wondered if maybe the spring mechanism just grabbed the crumpet (placing the crumpet closer to the elements), however another student found that the crumpet had to be put in in a certain direction following experiments with bread showing that one side of the element actually cooked to a higher temperature.

One student found the answer by using fresh bread and discovered this burnt on the defrost setting as it did progress straight onto toasting following the thawing.

Students visited the senior school and were shown a 3D printer.

Luke Smith the technology teacher took the cover off and students could see inside the black box and see it making the 3D product. Luke was also able to tell the students about how he had sourced a cheaper material for the 3D printer but it overheated so he had added a resistor into the system to remedy this.

Students watched a BrainPop video on electrical circuits, and recorded their understandings.

They then built circuits using nine stations set up with magnets, batteries, pieces of tin LED lights, and buzzers. Students built as many as they could. When they returned to class, Dorothy used their descriptive writing activity for each student to record their electronic system using specialised language and symbol conventions.

Dorothy had recently purchased a Brain Box activity for a car and a boat. On a day when the class was smaller she gave 12 students the two new sets and asked them in a group of 6  (without instructions) to see if they could build the circuits could make them work. This resulted in lots of rich instructions on what they would put where and why they were not working.

Since this activity students have been motivated to play with a couple of older brain box activities available in the classroom.

They get them out at lunchtime now and have a go at building – they make all sorts of things.

As a final activity, Dorothy found articles on a torch and students recorded their understandings of this technological system, for example: Science Inspiration, How Does a Battery Torch Work? 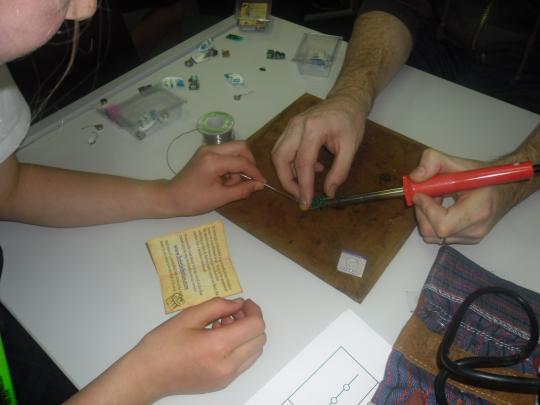 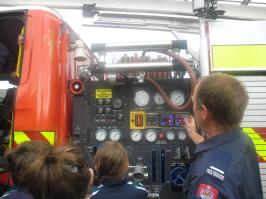 Exploring systems generally and looking at a simple system, the toaster, in more depth was a successful pedagogical approach to developing students understandings of the technological systems component.

Students had covered and developed understandings of all of the indicators in technological systems at level 1 and 2, and the first 2 indicators at level 3. Students could also use specialised language and symbols to describe an electronic system.

Dorothy feels her understandings of this component and how to teach it have grown and can see lots of other possibilities to grow understandings next year with another year 6 class.

The technological literacy the students had achieved over their time at Columba was also apparent. She found it straightforward to bring in discussions around multiple components in one activity. During the fire service visit, students’ understandings of the characteristics of technology, technological products, and technological systems were all apparent.

When reflecting on this work on systems, Dorothy's ideas included: