It has always seemed to me that Auckland has a large waterfront but no iconic building such as the Opera house.

This thought provided Dustin Parkinson with just the design inspiration he needed. His design for the Parkinson Performing Arts Centre gained an outstanding scholarship, scoring 22 out of a possible 24 and winning him top scholar in design and visual communication.

Dustin is interested in sustainability and outdoor sports, including surfing and snowboarding. Drawing inspiration from nature and integrating with the natural environment are integral parts of his design style.

He wanted to create an iconic building on the waterfront – and one that gave a message of sustainability and reflected the movement of Dustin’s favourite outdoor sports.

Ideation is the creative process of generating, developing, and communicating new ideas. It is recognised as an essential aspect of design work.

Dustin’s teacher Paul Bourdot encourages ideation in the students’ practice from year 9. Students work through the ideation stages of thumbnailing, explorative sketches, thinking sketches, technical sketches (looking at how their design could be constructed and developed) human factors, and presentation sketches. 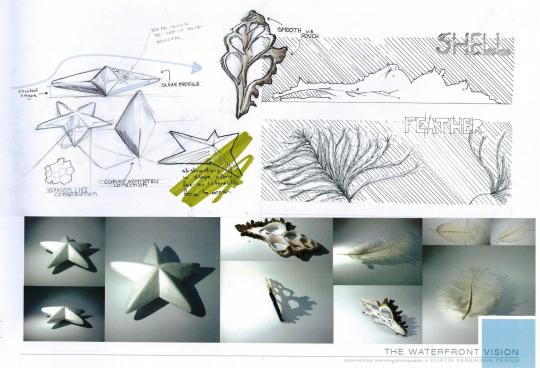 Paul notes that the implementation of the NCEA level 3 achievement standards in 2013, in particular AS 91627 Initiate design ideas through exploration, validates this approach.

For Dustin, ideation began with examining and drawing different leaves and bark.

Dustin deconstructed a leaf, drawing the shapes within it and using techniques such as exaggeration and tessellation. He followed a similar process with bark.

As his design for the performing arts centre evolved, Dustin often referred back to the shapes and designs he had created from the deconstruction of these natural items.

Research on the Wynyard quarter on the waterfront showed Dustin that the Auckland City Council were looking for a green image for this area. Dustin also took inspiration from The Cloud, which was built on the Queens Wharf to host an inner-city fan-zone during the Rugby World Cup 2011. 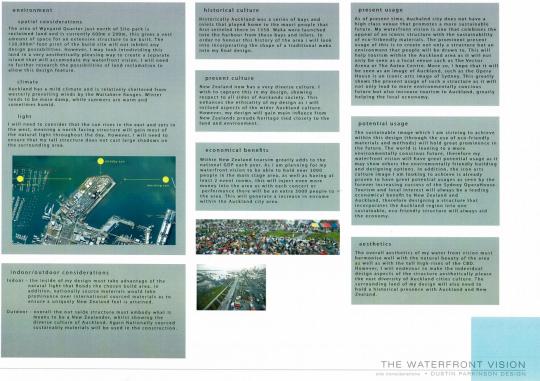 Initial ideas for the building

Following the ideation phase, Dustin drew some initial ideas for the building. He felt that these were too structured and not what he wanted. 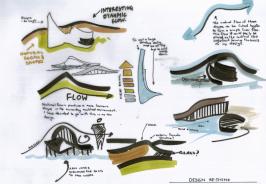 So he used overlays on these initial drawings and found that decreasing the height of the structures gave a more natural flow. He then added external struts to soften the block-shaped structures of the buildings and give the building a more organic feel.

This was a key feature that added to the building’s aesthetic. In his initial ideation, Dustin had known he wanted to use the shapes of the different bark forms and the flow of the lines in his design for the exterior.

Dustin used Photoshop to exaggerate the features of the waterfront. He placed design ideas over this, to see how effective they were and how well they related to the existing landscape. 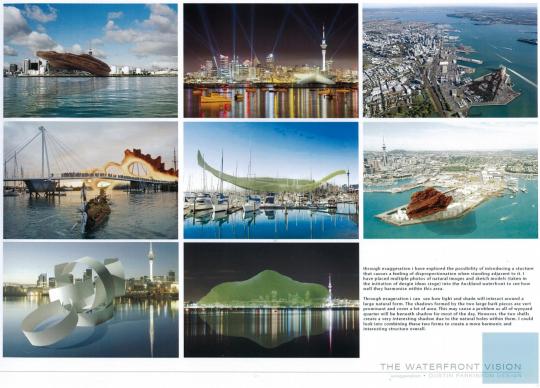 The building needed to have physical features that allowed it to function as a performing arts centre and as a venue for visual art displays and presentations.

I think having a well-developed understanding of the concepts of design and hand drawing was the real secret to using the computer design packages effectively.

Dustin put the drawings for the performing arts centre into Photoshop and rendered them with blue and white colours, which enhanced the natural feel of the building.

Paul taught Dustin how to make a scale model of the design. Once Dustin had made a 1:250 scale model, he photographed this and rendered it using Photoshop. The blend of model making and computer-aided rendering helped to produce very effective depictions of the light and shade created by the outer struts. 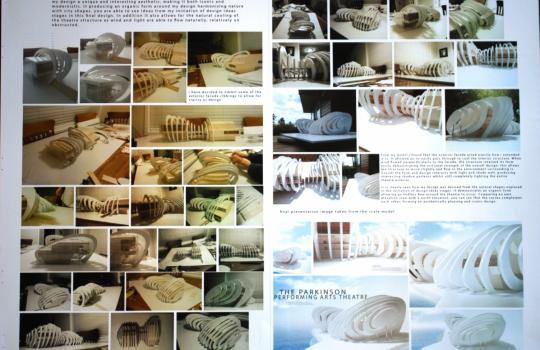 The 3D model also helped Dustin to identify and resolve issues. Bridges join the two parts of the performing arts centre. In the 3D model, it was obvious how much the design of a four-level stack of bridges blocked out the light. Dustin cut a hole through the centre of bridges but this didn’t work. He then took out two of the bridges. The model helped with making this change and ensured a lighter friendlier feel to this aspect.

The model makes you feel like you are inside the building

Rendering the design and adding the wow factor is Dustin’s favourite part of the work. 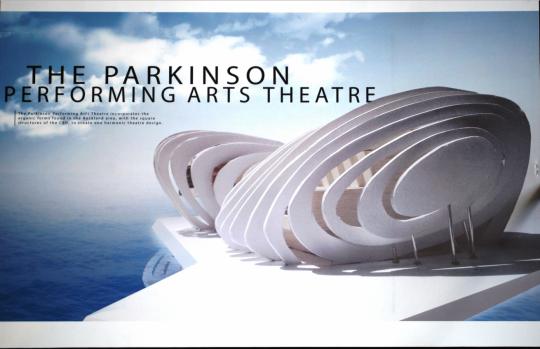 Dustin found that it was a “full on” year doing scholarship DVC. His teacher provided a planner outlining key stages and dates. He says the planner was helpful and the feedback from his teacher encouraged him to move on to the next stage.

Managing the workload associated with a DVC scholarship submission alongside four other year 13 subjects has prepared him well for university. This year, he is studying general engineering at Auckland University to gain access to the mechanical engineering course next year. His long-term goal is to work in aerospace engineering.

The skills in CAD that he gained at school have helped him develop a clear understanding of scale and perspective, which has already been valuable in depicting objects for his engineering papers.

Dustin says he gains huge enjoyment from designing. He enjoys the thinking that is embedded in the design process, the multiple possibilities, the creativity, and being able to correct the design at any stage.

Dustin is considering the possibility of offering his design idea to the Auckland City Council. 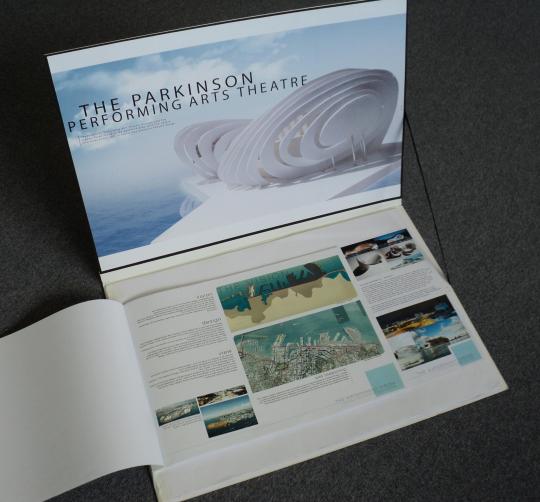 You can find the scholarship portfolios on the NZQA website at New Zealand Scholarship Design and Visual Communication.