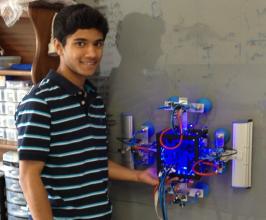 Standing on a ladder to clean windows on the top story of a house is not without its risks. Sohail Abdulla’s robotic window cleaner made this task safer for his father and won him top technology scholar.

This project took 2 years and allowed Sohail the time to refine his designs and develop 2 prototypes. As Bill Collis, Sohail’s electronics teacher, commented, “this is unusual within the constraints of secondary schooling. However, this practice is closer to industrial practice, where the technologist often has the time and opportunity to produce multiple prototypes.”

This was a large project for a secondary student to attempt. However, Sohail enjoyed it very much, and found the problem solving fun and interesting. He was quite happy to give up his leisure time, including weekends, to improve the functionality of the prototypes.

Going beyond the classroom

While Bill is an embedded systems engineer and was able to offer support and guidance on the electronics and programming for the system, the pneumatics for Sohail's project required very specialised understandings. This gave Sohail the opportunity to go beyond the classroom and experience being part of a community of technologists – a central aspect of technology education and key to the success of the project. Sohail took full responsibility for this himself, researching what he needed to know and then finding the assistance he needed.

He enlisted the help of Festo. This company is a worldwide supplier of pneumatic and electrical automation and has an office from which they distribute parts and do small projects. Festo mentored Sohail, allowed him to observe their practice, offered feedback on his design ideas, and allowed him to use discarded parts.

At Festo, Sohail often looked at the different components staff used in their work, asked questions, and developed an understanding of how these worked. He would then come up with his own design ideas and question the engineers as to whether they thought these would work in the window cleaner.

Sohail also spent time with Off the Ledge, a high-rise maintenance company whose main business was window cleaning. This company was very familiar with the risks associated with this type of work and able to offer advice on effective cleaning processes, cleaning equipment, and cleaning solutions.

Following his visit to Off the Ledge and initial investigations into existing robot window cleaners, Sohail decided that he would try to create a prototype that would not only suit the home window cleaner but could also work for high-rise window cleaning. 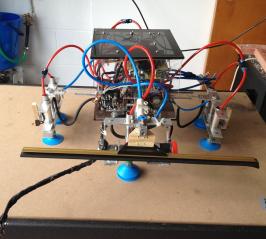 As Sohail developed the prototypes, there were several major issues that required resolving.

One of the big problems was providing enough vacuum pressure to ensure that the robot stuck to the window.

In the second prototype, Sohail halved the weight of the device by separating the passive and active components and keeping only those that were required for the cleaning on the active part of the robot. The rest were moved to a control device that was connected to the cleaner by cords. 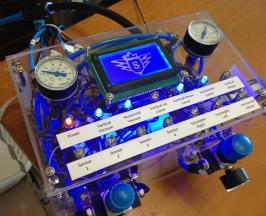 Halving the weight, greatly reduced the amount of air pressure required to hold the device on the window, and hence the volume of compressed air required.

Another key issue that required solving was related to the mechanism that lowered the suction cups onto the window. Initially, Sohail used a pneumatic cylinder and developed his own guide rods that lowered the suction cups. These rods were heavy so on the second prototype Sohail used a component that he discovered at Festo, which was a tenth of the weight. This significantly reduced the weight of the device. 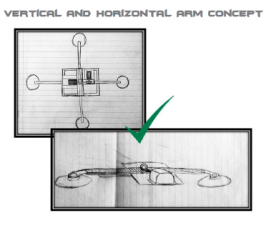 The squeegee was placed at the top in the initial device – the plan being that the force of gravity would assist the cleaning process once contact was made with the window. However, the suction cups would not allow the squeegee to lower all of the way to the glass in this first prototype. After some further design thinking, Sohail noted that most window cleaning was carried out left to right and placed two squeegees on the horizontal arm so that it could clean from side to side.

Sohail is a great advocate of functional modelling and notes the risks that can be addressed through this.

When developing both of his prototypes, Sohail used Computer-aided Design (CAD) software. Sohail believes that more time spent on this when developing the initial prototype could have reduced the costs and improved the efficiency of his design process. The ability to see design ideas in 3 dimensions prior to committing materials and construction time adds to the overall efficiency of a project of this type.

Programming the robot by initially modelling its movements in a flowchart proved to be an efficient way of carrying out this work.

Installing the automation into the robot was a challenging step. I quickly learnt that programming the robots moving sequence without a flow chart would be too confusing and time consuming. From this, I also learned that planning before doing is an important development practice. 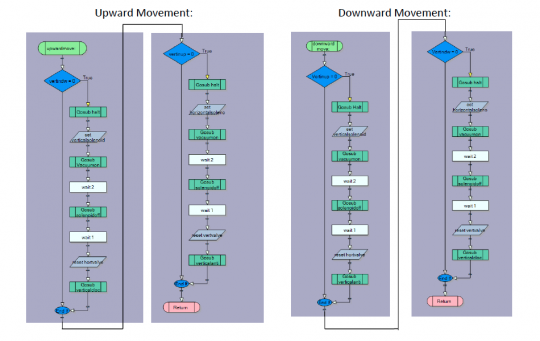 The robotic window cleaner was seen as fit for purpose in its broadest sense. It carried out the task it was designed to do and if used in industry could also have potential to hugely reduce the cost of worksite accidents related to window cleaning.

Sohail used commercially available parts but he sees that commercialising the production would require further development.

Sohail would like to further refine the design with the new knowledge gained in his university programme. 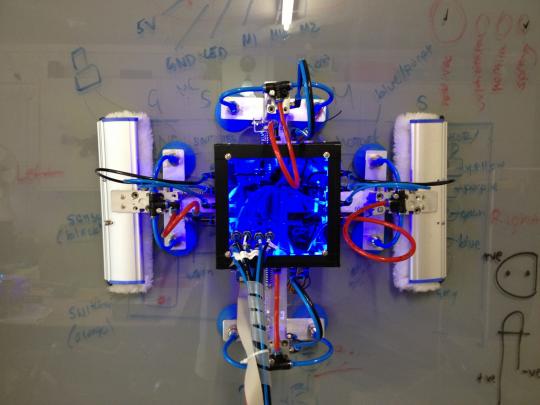 Metacognition or thinking about thinking was a feature of Sohail’s work.

During the project, Sohail saw that building effective working relationships with organisations outside of school was critical. He knew that the staff at Festo were busy with their own work and he was appreciative of their help and support. Asking the right questions, designing his own ideas and then asking for feedback, and showing an interest in the parts and mechanisms they were working with helped him build an effective working relationship.

Sohail noticed that design precision was key to the success of the window-cleaning robot. Trying to get plastic cups to stick to a window, unstick, and then move across a window required a high level of precision in the components.

The technological process is also firmly embedded in his approach to project work.

In the year 13 electronics class, there were 2 students working on 2-year projects. Bill Collis, the teacher, feels that building the students' abilities over several years to ensure they are self-regulated and resilient learners is key to success in scholarship.

Some of the strategies I use include not always answering their questions and challenging ridiculous questions … As I get to know them, I set goals that suit the individual.

Sohail notes that when he discussed his initial idea of the robot cleaner with Mr Collis, he commented that this project was a huge challenge and probably not feasible in a 32 week programme. Sohail rose to this challenge – and as predicted the project took 2 years to fully realise.

Sohail plans to study mechatronics at Auckland University this year. 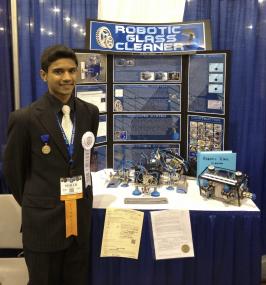 In addition to winning top scholar, Sohail’s successes so far include the following.

At Realise the Dream, he won the US ambassadors Outstanding award, which included a free trip to Phoenix Arizona to attend the Intel Science and Engineering Fair. At this fair, he was placed third in the competition in the Engineering: Electrical and Mechanical section.

Sohail Abdulla Prefect Speech 2013 - We are the future