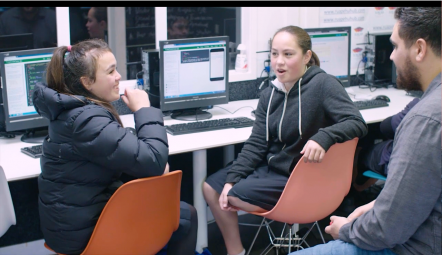 In the three videos below, teachers, students, and members of the Ngāti Rangi Trust talk about how the local iwi partnered with Ruapehu College and created Te Pae TaTa within the school grounds.

Ruapehu College and the Trust collaborated to offer digital technologies programmes twice a week to years 9 and 10 students. The students went to Te Pae Tata for their classes and worked with Kawana Wallace the ICT tutor.

As a result of this work, the ICT tutor Kawana, the Trust, and the college staff have developed an entry and exit portfolio for students at years 9 and 10. This portfolio has been shared with primary and senior secondary schools and teachers in their area.

Erena Mikaere-Most from Ngāti Rangi Trust and Principal Kim Basse discuss their collaboration and the impetus for this project.

Erena Mikaere-Most, Ngāti Rangi Trust: The Ngāti Rangi Trust was originally established to progress the treaty settlement claims of the iwi. Ngāti Rangi is a small iwi based here in the Central North Island, primarily in and around Ohakune, around the western slopes of their ancestral maunga, Ruapehu, or as we refer to him, Koro Ruapehu.

Back in 2011 there was a Rangatakapu Think Tank – so kind of a younger generation of Ngāti Rangi uri or descendants who came home to, at that time, talk about their aspirations for treaty settlement. What came out of it was a realisation that the people who were here at home living, were living a pretty stark reality. So we looked at some surface level statistics, like NCEA achievement, like housing, like income, at that stage just for Māori and it showed that our people were in survival mode.

So for Ngāti Rangi to vibrantly exist in 1000 years' time we have to ensure that the people are thriving. And that’s where the genesis of the Ruapehu Whānau Transformation Plan came from. The Ruapehu Whānau Transformation Plan has 23 solutions. It’s informed through a number of statistics and stories of the people who live here because they’re the ones who know best about what will actually help. How will we progress ourselves into this changing, dynamic, crazy, global, digital future?

So, in our community 70% of our workforce are in the low to semi-skilled labouring positions. And with the changes that are happening, with the evolution of technology that’s going on right now, they’re probably going to be affected first in terms of automation. And so what does that mean for us? That means that we have to prepare ourselves. So we were aware of the digital technologies fund that came out to help inform the 2018 curriculum changes. And we were approached one day, it would’ve been within a week actually, by one of the deputy principals at the college and he was really keen, he was really passionate about digital tech.

Kim Basse, Ruapehu College Principal: We were keen to be involved in the technology initiative because this is the way of education – this is the future of education. And so our students need to be savvy, you know, they need to be creative. They also need to be critical thinkers about what they’re doing and what they’re learning. This is a really, really good subject for that. One of the great things about what we have here at the hub and working with the iwi, is that we are working towards our Māori values, our community values. That’s really important. I think it’s really important in the digital technology area too.

Erena: So the kids have been coming in the last two terms, and beyond the trial project and beyond the funding, we will continue. And we have continued to provide the computer science curriculum to all year nine and ten college students of Ruapehu and they are thriving. They’re loving it and they’re so impressive. They just … I have witnessed, I guess, their development from learning the absolute basics, to now being able to design and build games. And they’re in there with their java script or whatever, coding language is going on on half the screen and whatever they’re building on the other half of the screen and they’re just absolute naturals. So we are very lucky. It’s really exciting for us as a community to see that.

What’s really nice too is when the rangatahi from the college get to see their kuia and their koros come into the same building and learn some of the things that they’re learning as well.

That, for us, is everything.

The ICT tutor, principal, and students discuss the success of the approach used to engage students, and in particular girls, in digital technologies.

Kawana Wallace, ICT Tutor
So because we’ve got this collaborative approach to critical thinking and design thinking, we’re all on the same playing field – we speak the same language now.

Kim Basse, Ruapehu College Principal
One of our technology teachers also has his degree in psychology. He’s using his digital class to talk about the pedagogy behind learning. So he’s talking about Carol Dweck's work in terms of the mind growth set. So that’s about, you know, you have a challenge in your life and your workplace – how do you overcome it? And it’s all about keeping an open mindset. It’s about skills like facing problem-solving, getting over a difficulty, working and understanding and problem-solving – those sorts of skills. So that class is talking about how they’re learning in that particular area, keeping an open mind, and trying to problem-solve when they get to difficulties. That discussion, that pedagogical discussion about learners learning, is also happening in other areas of the school, which is fantastic for me as a principal to see the discourse of learning also happening in hard technology and some of the other subjects.

Kawana
What I think is one of my biggest successes is the fact that the majority of our engagement has come from our girls and we know that in the industry females currently only make up 8% of some sciences. So it’s a really big achievement to have our girls become passionate about digital technology and wanting to become software engineers and designers.

Student
I like the whole website designing, when it looks pretty. I’ve done a couple. I’m doing one in class in social studies now. I’m using the coding, the website making, side of things. So I’m making a website. It’s about child soldiers and who they are and what happens, and more like awareness and stopping it. So I’m looking at South Sudan and just the different things that goes on there and their civil war. Yeah, what they’re being forced to do.

Kawana
Since we began the digitech programme this year, we’ve had some major successes and some of those include students who now want to become digital scientists and computer scientists. We’ve had a year-13 boy who now wants to do mechatronics, and part of our digitech programme we’ve had a year-9 girl, who came up to me yesterday and said how she wanted to be a software engineer, focusing in the security expertise. And she’d already started researching things like white hat hacking and bank security and things like that. And just seeing that passion growing in these students, just is really fulfilling and it shows that we’ve been successful, that we’re actually making an impact.

Erena Mikaere-Most, Ngāti Rangi Trust
The potential of digital technology for rural communities across Aotearoa is huge. And we knew that coming into this project and so we wanted to establish an initiative, a platform, a physical place, where people could come and be exposed and explore advanced technologies.

In this video ICT Tutor Kawana Wallace describes the rationale and use of the exit and entry portfolios and how they were developed.

Kawana Wallace, ICT Tutor
I’m the tutor at Te Pae Tata. My role here is to engage with the community, delivering high-tech courses, which I design and develop. My role originally started in Raetihi, where I worked as a student role model and teacher aide. I’ve had a bit of background in computer science from university, which I brought in and started working with here. I’ve engaged with the community at all levels, from five-year-olds right up to an 87-year-old lady.

Because of the nature of the trust and the project that we’re doing here, and where we’re located, we’re connected with the high school. Last year we decided to apply for Ministry funding together, which we got. And we wrote a programme, a year-long programme – 12 months – a digitech programme, where we would engage with year nine and tens. It would be a compulsory course for them. And we would deliver everything from fundamental computer science theory, to programming, game development, app development, and web development.

So one of the core outcomes for our project was to develop an entry and exit portfolio for our year nine and tens. This portfolio was built in conjunction with our community, and it just outlines goals and expectations that we want from our kids before they come to high school and when they leave the programme. So when they come, they might have basic computer experience and when they leave, they might be fluent in a programming language.

So the portfolio's really useful because it clearly outlines the expectations that we want for our students before they come in and before they leave. So our portfolios are designed around the evolving digital tech curriculum. Some of the key points in our portfolio are things like teamwork and health and safety standards within a group. We’ve got critical thought development, a lot of the portfolio links towards the six key computer science areas that the Ministry is focusing on, such as human and computer studies, digital technologies, algorithms – things like that. So they’re all relative and really well connected to the new curriculum. Some of them come from a bit more experience in the software field. I work with a few software developers to really flesh out some of the more specific outcomes, like being able to work with databases or develop advanced algorithms to solve problems.

Our portfolios have only recently been developed and so now the next phase is to engage with the schools and the communities to further refine and also to start implementing our portfolios.

Student
I started off doing a little bit of digital technology at Raetihi Primary with Kawana. It was a before experience, like a head start, which was good and then – now it’s a bit easier for us to do it now. At the moment we’re doing free code camp, so we’re just learning other things about coding, so like H1, H2 meaning heading, and then there’s the P element, which is paragraph, then there’s the class, which is changing, like colour, font, text, size – stuff like that. The digital technology programme is helping, like maybe it could help me decide what I want to do in the future.

Note that the programmes and/or resources used within this project are not officially endorsed by the Ministry of Education.