How can I plan for technology learning within te ao Māori contexts?

Technology teacher Sue Bristow introduced design in textiles through an exploration of tāniko (a traditional form of weaving).

She found the exploration of tāniko provided opportunities to:

This snapshot is an example of local curriculum and culturally responsive practice. 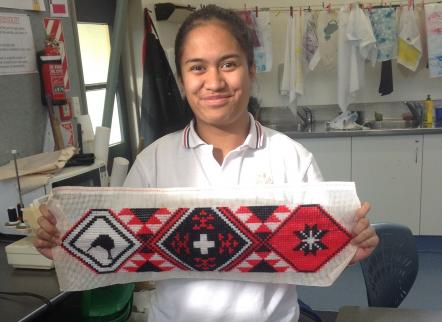 A Gisborne Girls' High School student shares weaving she created when she was nine.

At Gisborne Girls’ High School, the year 10 students produce a hoodie/sweatshirt that includes their own applied design. The programme of learning has a focus on technological practice and technological modelling. It is also an opportunity for students to develop skills, knowledge, and an understanding of construction in knit fabrics and methods of applied design.

Technology teacher Sue Bristow knew that the national secondary school kapa haka competitions were being held in Gisborne that year.

Sue thought this event, and the importance of costume and design within it, could provide a useful way to introduce design to textile students. The event was local and had relevance to the students at Gisborne Girls’ High School.

Many of the students were excited and looking forward to the competitions, and the Gisborne Girls’ High and Boys’ High kapa haka group was taking part.

Leeana and Erin came to Gisborne Girls' High School and answered the following questions for the students.

Tāniko describes both the patterns and the traditional weaving techniques.

Leeana came home to Tairāwhiti six years ago and met Rawinia Wright, a great weaver. Rawinia had a classroom full of her own beautiful weaving at the Tairāwhiti Polytechnic, where she was teaching at the time. This inspired Leeana to learn the art of weaving.

Erin’s husband is a carving tutor at the Whirikoka campus of Te Wānanga o Aotearoa. When they were based in Wellington, he encouraged her to take up weaving at the Hetet Studio in Waiwhetu, Wellington.

As part of their degrees at Toihoukura, Leeana and Erin were tutored by master weaver and EIT Tairāwhiti lecturer Christina Hurihia Wirihana.

What are the tāniko patterns used and what do they mean?

Many of the patterns represent nature and the spiritual beliefs of Māori. 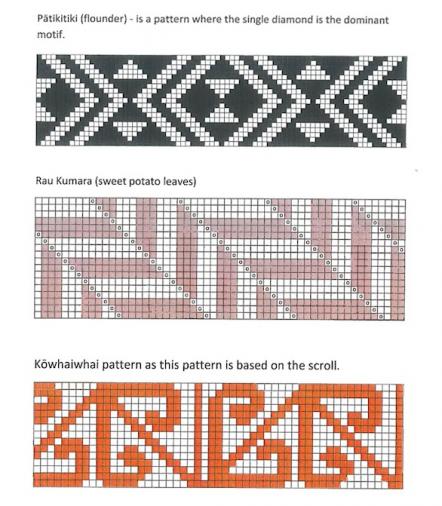 The patterns are quite universal, but the meaning can vary between iwi. Weavers today are not bound by rules, they are flexible and explore new ideas.

Leeana has a blog of her work: Whirinaki works 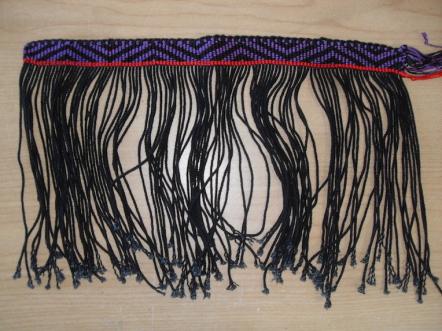 How do you use these patterns in your work?

Traditionally, patterns were selected to send a message. This practice still continues. For example, a weaver creating a piece to send a message about looking after the ocean and objecting to drilling may include both the aramoana pattern and the niho taniwha pattern.

What materials are used in tāniko?

Traditionally, tāniko patterns and weaving were made from muka – a fibre extracted from harakeke (flax). 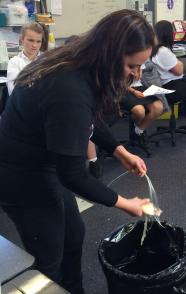 Specific varieties of harakeke are more suitable for providing the muka. The more muka a plant contains, the more upright the harakeke plant stands. Wherever she lives, Erin transplants her favourite plant variety of harakeke for tāniko.

There are protocols to follow when harvesting the harakeke. These include the weavers saying a karakia to ask that the plant is safeguarded and nurtured.

To extract the muka, the back of the flax leaf is cut to reach the muka. Erin then uses a hoemoana or hururoa (horse mussel) shell to strip the harakeke to produce the muka.

She collected the shell from the beach in Eastbourne when she lived in Wellington.

Erin adapted the shell for this purpose by binding one side of it with masking tape to prevent the shell edge from cutting her hand and to give it strength.

The muka is then plied by rubbing the strands of fibre up and down the leg to create the miro (thread). 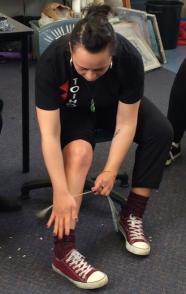 Tāniko weaving uses 4x4 thread. To create the thread, the muka fibres are placed in sets of four. The muka has slight variations based on its position in the harakeke and on the direction it was stripped from the harakeke. So to ensure an even weave, each set of four is placed in the opposite direction.

Erin has also been experimenting with muka that has not been plied.

Different weavers will prepare their muka in their own way. Weavers respect each other’s methods of working. 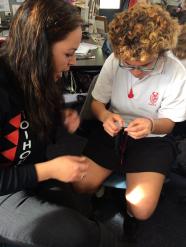 Tāniko is carried out by hand, using a technique that involves folding the strands of fibre over each other in a particular way. The patterns are created by including different coloured strands and bringing these threads to the top as they are twisted.

What process do you follow when weaving a piece of tāniko?

Erin mainly uses muka. She always takes the muka from the same plant to keep the colour consistent.

First, she prepares her whenu (the warp threads that go lengthways) and stores these in shanks. She prepares some of the aho threads (the weft threads that go across) at the beginning, and then more as the weaving progresses. This gives the weaver a break from weaving.

It takes a lot of time to prepare and weave the muka. To weave a piece the size of a tīpare (headband) could take two days. A kākahu (cloak) takes months because the strands are very fine.

How has tāniko weaving changed?

Traditionally, tāniko was all done by hand using muka. We don’t know how the technique was established or how the muka fibre in the harakeke was discovered. When Māori first arrived in New Zealand, they wouldn’t have been able to find the bark used to make tapa cloth. It is amazing to think how they discovered this material and a method of weaving to create beautiful and functional clothing and adornment.

After Europeans arrived in New Zealand, techniques changed. The tāniko patterns were translated onto graph paper and they were sometimes applied to tapestry material using wool. Originally, the patterns were rectilinear but graphing allowed curvilinear patterns to be translated into tāniko.

Nowadays, some of the tāniko patterns are created on industrial knitting machines.

How do you colour the muka?

Traditional dyeing techniques are still used by weavers today. Initially, the muka is soaked in a mordant solution created from other native plants to ensure that the dye adheres to the fibre. A mordant creates a chemical reaction to bind the dye to the fibre so that the colour will not bleed when wet. 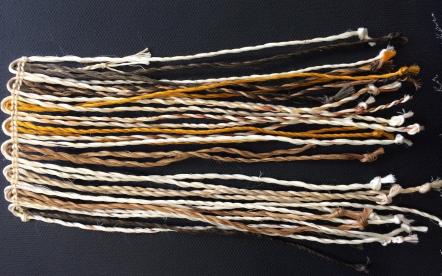 Paru (mud high in iron salts) provided black, raurēkau bark made yellow, and tānekaha bark made a tan colour. Rolling the dyed muka in alum/potash is also used to set the colours.

Erin has experimented with rolling muka that has been dyed with tānekaha bark in potash. This gave the miro a different colour, but the colour faded over time.

Can you tell us about your recent work and the work of others in weaving?

Tutor Christina Hurihia Wirihana from Toihoukura led a project that involved a group of expert weavers creating 50 tukutuku panels for the refurbished New Zealand wall at the United Nations.

See the news item on Māori Television: Tukutuku panels heading to the US.

It took longer than anticipated to refurbish the wall at the United Nations, so the panels were exhibited at Te Papa Museum.

Christina is the leader of the Te Roopu Raranga Whatu o Aotearoa, National Collective of Māori Weavers in New Zealand.

Alongside weaver Toni Sadlier, Erin was commissioned by the Ministry of Foreign Affairs and Trade to make a kākahu (cloak) to represent all of the iwi of the East Coast.

It is housed in The Hague so that visiting dignitaries can wear it when introducing their credentials to a country and at other special occasions. A special request was that the kākahu be made out of threads other than muka. If it was made out of muka, the kākahu may not have been allowed into other countries because of the strict rules around plant materials moving between countries.

The kākahu was presented to Ministry of Foreign Affairs representatives. 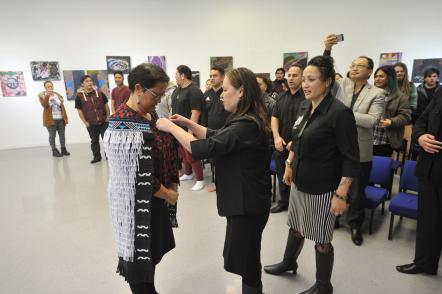 This image is used courtesy of the Gisborne Herald.

Erin loves working with muka but has found that the work on the kākahu has encouraged her to be more contemporary in her weaving practice. Leeana is striving to be more traditional in her weaving!

Erin and Leeana encouraged the students to consider entering competitions. They mentioned the Cult Couture competition. This competition is part of the Southside Arts Festival held in Auckland.

Another competition that students can enter is Miromada. This competition includes a section called T-shirt Placement. Entries are open to secondary, tertiary, and freelance designers/artists who identify as Māori.

Miromoda is the Indigenous Māori Fashion Apparel Board (IMFAB) and was founded in December 2008 to advance the quality status of Māori fashion design and to raise its artistic and professional standards.

Leeana and Erin shared their ideas for resources on tāniko.

In their feedback, the students said they found the different parts of the process interesting. Many also commented on their interest in the history of tāniko.

The students also appreciated having the visitors coming to speak to them and giving practical demonstrations.

As a nine-year-old, Kataraina watched her mother making the pari and always wanted to have a go. Jacqueline gave Kataraina a piece of canvas and she quickly grasped the technique to create the patterns and finished her piece in two weeks.

“I just knew what to do. I worked out the directions quickly and then worked out that moving up and down the squares and counting created the patterns.”

Kataraina has gone on to assist her mother with other pieces she has created for Tū Te Manawa Maurea and Tūranga Wāhine Tūranga Tāne groups.

After the presentation on tāniko, Kataraina also wanted to learn this technique.

Many of the students expressed an interest in having a further go at the tāniko technique. Discussions are being held with Toihoukura to explore this possibility.

The topic of tāniko has clear links to the technology learning area. Examples of links to the indicators of progression that could be made from the information that Erin and Leeana shared are listed below.

For example at level 4:

For example at level 3: