Food Technology Teacher Belinda Devlin was planning a Year 9 unit in which her students would visit a food production facility to observe the development of a food product from beginning to end, but it was difficult to find anyone willing to host a school trip due to issues of health and safety and insurance. So she decided to change the context altogether and, by taking advantage of her parents' chestnut farm in nearby Kumeu, created a very successful unit in which students gathered the raw material, tested its uses, trialled recipes and developed their own chestnut products. Belinda delivered the unit to two classes and colleague Anthony Dooley delivered the unit to a third class.

Belinda first researched the industry, contacting organisations such as the New Zealand Chestnut Council, and then brought chestnuts into class for the students to taste and experiment with. The chestnuts were, she says, a largely unknown product to the students – most hadn't eaten them or even seen raw chestnuts before, although in discussions at home many found that their parents had. Belinda removed the outer layer of the chestnuts and deliberately provided as little information as possible, to see what the students could come up with individually. On their field trip (and despite the research they had already done!) the students were surprised at the prickly outer shell – many final presentations referred to the necessity of wearing gloves and shoes! The students learnt about farming chestnuts and gathered some to use in developing their products, then had a picnic lunch before moving on to their afternoon visit.

As the Year 9 students wouldn't have the option to continue with Food Technology in Year 10, Belinda wanted to ensure they had an idea of the career opportunities available in the subject. She had approached the Food Technology department at Massey University (Albany), they were keen to be involved and planned a programme for the students in which they discussed a Food Technology career and introduced them to some of the work it entails. The students learnt how food 'smells' are created chemically and saw how the machine can make, amongst others, a (delicate) chestnut smell. The students looked through microscopes at examples of "good and bad" bacteria, used food and colour additives to create individual tins of custard which were put in the retort, and did some testing of Coke versus Coke zero in an actual sensory testing lab.

Belinda says this was a great way to "grab" them and provided the students with a career option they mightn't otherwise have known about or considered. Visiting the university in Year 9 meant that it was early enough for Food Technology to still be a viable option, because students were still doing the sciences required in that field. The students enjoyed finding out about what a food technologist does and trying some of the work themselves.

"They just loved it all: wearing the lab coats, working in the labs, making their tins of custard, sensory testing," says Belinda. 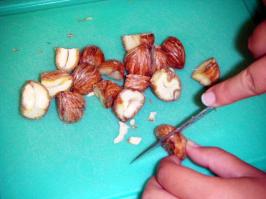 Belinda emphasises the Technological Practice strand in this unit, focusing on Brief Development and Outcome Development and Evaluation. Every time the students trial a product in the classroom they review it the next day, doing their evaluation in different ways such as hedonic testing of products, sensory descriptors, star charts and 'six-hat' thinking. The students started testing different ways they could use the chestnuts and some came up with techniques, such as grinding chestnuts into flour, grating, chopping, sautéing, boiling and roasting without any suggestions from Belinda. She did discuss ideas with the class later on, and they worked individually and in groups to create a lot of different chestnut dishes, such as a chestnut ice-cream, pickled chestnuts, chestnut muffins and chestnut tortellini. The Chestnut Council, which featured photos of the students on their website, requested a recipe for the chestnut ice-cream, and chestnut growers from around the country asked for the students' recipes. Belinda says that the students hadn't developed the ice-cream recipe to a finished stage and the other recipe requests arrived after the project was finished. This feedback, however, will be incorporated at the beginning of the unit another time.

The students were asked to develop their concept ideas at home during the holidays, partly to allow extra time but mainly because the chestnuts would deteriorate too much before the next term (they were each given a bag of chestnuts to take home which meant they also had to understand how to store and prepare them). While they were trialling their concept ideas (most had come up with six or seven) and bringing them in for class tastings and comments, the students also cooked various dishes as a class, for example sweet and sour chestnuts, chestnut soup, chestnut chocolate tarts, chestnut pate and hummus. They continued to work on their concepts at home at this stage and tested their concept ideas on classmates, using the feedback from these tastings to further develop their recipes. They were encouraged to take photos as they worked, to document both their outcomes and the process they were working through. The students asked family members to taste and comment on their recipes and at the conclusion of their development the students also used this information in their 'review, rethink and re-plan' process. 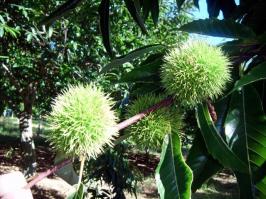 Chestnuts on the tree.

The three classes produced over 75 individual products including chestnut hummus, chestnut tortellini, chestnut veggie rice, chocolate chestnut cake, chocolate cranberry chestnut custard, spicy chestnuts and ice-cream. At the conclusion of the unit students used PowerPoint (although a few made posters instead) to present their product to the class, discussed the process they had worked through and provided samples for their classmates to taste.

The Chestnuts unit was very successful and Belinda says that most of the students rose to the challenge: "Ninety percent of them enjoyed it right from the start and were really excited to be developing a product. The rest decided they didn't like chestnuts and although they still did the work it didn't have that passion that the others did". She adds that many of the parents also enjoyed the unit, because it brought back memories of eating chestnuts, which they commented on during parent interviews or in the notes their children took back to class.