This resource gives an example of a stellar student outcome and describes key aspects of the project and assessment opportunities. 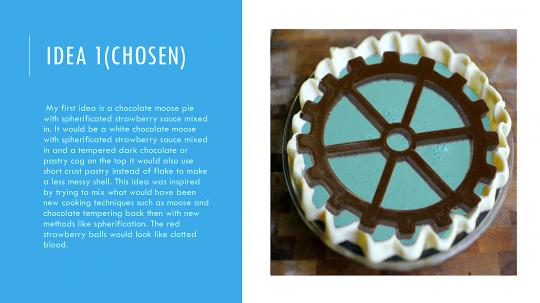 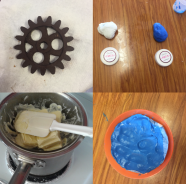 In the play, Sweeney Todd lives above Mrs Lovett's pie shop and makes pies from the remains of Sweeney Todd's murder victims. Sweeney Todd is set in Victorian times and the play has a steampunk influence.

The pie needed to:

Due to limited fridge storage, the pies had to be made in batches over five days and within class time each day.

The pie top, a cog design, was chosen as it fitted the steampunk influence. The cog design was initially tested using pastry. However, the shape of the pastry cog was altered by the cooking process and did not look quite as effective. The final design was a chocolate cog. It was easier to control the shape using this technique and ingredient. 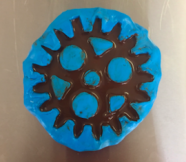 To make the chocolate cog Chad learnt how to use a 3D printer. He designed and printed a plastic cog that he then used to make a reverse copy mould of the cog. Food grade silicone was used to make the mould. The chocolate was tempered to ensure a smooth and glossy cog. The first cog was a little thick and difficult to bite through. Chad made the cog thinner by not filling the cog mould with so much chocolate.

A variety of pastry types were trialled for the base including homemade and store-bought. Sweet short store bought pastry baked blind proved to produce the best results in terms of flavour and appearance.

Chad decided that if the pie filling had the appearance of blood, it could add a dramatic effect to the pie eating during the play. In the script the pies are described as being made made from the human remains of Sweeney Todd’s victims.

The initial trials for the filling included apple and chocolate and red berries. But this filling was not palatable to the cast.

During his research, Chad had read about reverse spherification – a technique that chefs use to turn liquids into stable edible spheres with a gel membrane that pops in the mouth.

Mrs Sehji, Chad’s Food technology teacher, had an Alginate caviar kit from Massey University Food technology information(MUFTi) which provided the ingredients available for him to achieve this technique. After several trials, he achieved the perfect spheres that were palatable. The sphere filling was a strawberry sauce.

A white chocolate mousse with the strawberry sauce spheres provided a stable filling for the pie. 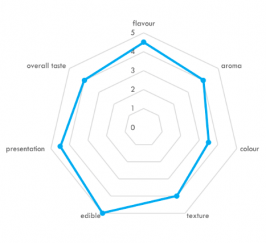 Chad sought feedback during the development of the prototype. He created a sensory star diagram to map the final feedback from stakeholders and to check that the completed prototype met the key sensory attribute specifications.

The pie scored high on edibility, presentation and flavour. Other feedback comments included, "The pies were darn good. I liked how the sperificated strawberry popped in your mouth but the pastry was a bit soft, I liked how the strawberry contrasted with the mousse and I really like the cog on top."