Trent's client was Pastor Steve Millward who required a sign for the recently completed Crossroads Church in Mangatangi to help create local awareness of the new building.

Trent's brief was to create a sign to go near the road in front of the church. The sign would need to be large and have a unique design to attract the public's attention to the new facility as they drove past. Trent's designs and materials would also have to fit in with the local environment.

Safety was a major concern for Trent – the large sign would have to be very secure, as it was positioned near the church's front entrance and a main road. Durability was also a factor as the sign would be continually exposed to the elements on the windy Hauraki plains area. These factors played a large part in Trent's construction and material choice.

As the Crossroad's Church board would also be major stakeholders throughout the project, Trent also had to consult with the board at regular meetings to get approval on design and budgetary milestones.

Trent started the project by creating a number of concept drawings which were shown to Steve and the board. Once a design was agreed on Trent began researching the materials appropriate for a heavy-duty, yet stylish, sign, and that would keep costs to a minimum. Trent then adapted his concept drawings to create working drawings that included precise measurements to serve as his guide throughout the construction process. This also helped Trent to develop a cutting list for all of the materials needed.

Trent ordered Duragalv coating for the sign's steel frame. This coating has enhanced iron alloys and is extremely hard, and allowed for a longer life without rusting and meant that priming paint would only be necessary on the welded joints.
Trent also began researching the different tools and techniques he would need for the sign construction which included a cold saw for cutting steel sheets, an arc welder for joining the steel frame together, a pop rivet gun for attaching the corrugated iron component to the frame and a steel roller bender to create the curves in his design. This helped Trent to determine what he could use in the school's workroom and what he might have to outsource. Trent's budget also took into account the cost of using outside services if some aspects of construction fell outside of his existing skill level or required specialised machinery. 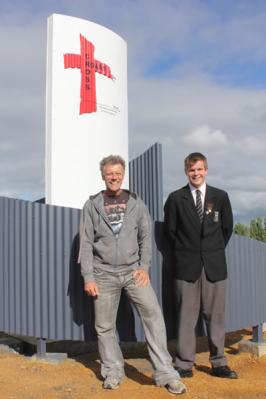 As the school materials room didn't have all the equipment Trent required for this project he had to source machinery in the local community. Trent also had significant help throughout the project from his engineer father Tim Summers.

Trent first ordered galvanised RHS steel through local engineering firm Williams' Engineering. Trent took this steel to Norm Bates' Workshop in Ngatea to be bent into shape in a steel roller – and there he ran into a major setback.

"When we started rolling the steel it was clear that it had a very high tensile strength and instead of bending the roller was just compressing the steel and straightening out the rounded edges. We were concerned that if we went any further the roller could break so I had to abandon rolling the RHS steel as it was simply too big."

Trent asked a local engineering firm if they had machinery that could bend the RHS but they confirmed that even with a larger roller the RHS steel's shape would be distorted by the process. This led Trent to a radical rethink of his design.

"As the roller at school can use flat steel, I decided to incorporate that into a new design. Because flat steel is lighter than RHS I needed to have more posts in the ground to increase the strength of the sign and to support the curved flat. To avoid wasting material and reducing the overall cost I used the unused RHS for the extra posts," Trent says.

Once the new flat steel was ordered, Trent began rolling it into curves in the roller bender without any further issues. The curved steel sections were now ready to be welded together to create the frame for the wraparound part of the sign's design. Trent first measured and marked the correct spots for each join with wax chalk before clamping the steel then tacking it into place with an arc welder. Trent repeated this process on all of the sections until the entire wrap-around frame was complete. He then welded the joints permanently with the arc welder. The joints were smoothed with an angle grinder and painted with grey primer to prevent corrosion. Happy with this result, Trent repeated this process on the second wraparound frame.

For the sign's cross logo, Trent used an overhead projector to place his design onto a piece of plain corrugated zinc iron. This gave him a chance to see how his design would look on a large scale on the corrugated iron. After consulting with his stakeholders, Trent decided to extend the length of the cross so that it wouldn't be mistaken for a medical symbol. Trent sketched this alteration on the corrugated iron then used tin snips to cut out the design.

"The cuts were fine going across, but when I cut vertically the corrugations in the iron twisted and bent the metal. To avoid this I used the angle grinder to cut the rest of the cross. I then filed the edges to remove the sharp edges and tidy it up."

Trent then sanded the cross to remove the outer zinc and create a better surface for paint to stick to. He used an airgun and compressor to paint the cross red, applying three coats to get the right finish. The cross was then taken to Art Effects in Thames who completed the stickers for the Crossroad's logo. Trent was now ready to move the completed frames to the sign's location, where they were concreted into their foundations with the help of a local engineer. Trent decided to make the frame for the central spire on site.

"I made the frame for the spire in situ because the foundations had been specifically designed to shape. So this was the safest way to avoid any inaccuracies where the frame wouldn't fit the foundation."

Once the central spire frame was set in place, Trent first tried attaching Aluminium Composite Panels (ACP) to the frame with 3M DHB double-sided signage tape but soon realised it wasn't up to the task.

"The tape alone couldn't hold the panels in the curved shape as the force was too much and they kept pulling away from the frame," Trent says. "The panels were difficult to manipulate so we used tie downs to pull them onto the frame. I then screwed the panels down both sides to prevent them from lifting off the frame."

This wasn't the solution Trent had planned, but after he painted the screws white he found they were barely noticeable and he was happy with the finish. Trent then attached the completed cross logo to the spire.

The central spire complete, Trent attached the corrugated iron panels to the wraparound frame with roofing screws, forming a solid corrugated wall. Trent used a permanent marker to sketch the sweeping shape he wanted for the wraparound, then cut the iron to shape with the angle grinder.

To remove any rough edges that might pose a safety risk, Trent filed all of the cut iron by hand. The corrugated iron was then sanded to prepare for painting. Trent finished the project with a final paint job using the airgun and compressor.