A Diploma in Costume Construction

In year 13, Georgia was considering a career in genetics when a school trip to Toi Whakaari New Zealand Drama School completely changed her career vision.

I thought – this is me! This is everything I didn’t know I was looking for.

Georgia had taken technology right through her schooling at Havelock North High School, specialising in textiles from year 10 and securing a scholarship in technology at the end of year 13. 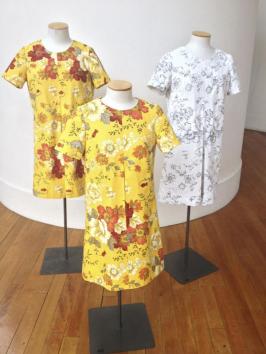 After high school, Georgia secured one of the six places available in the Diploma of Costume Construction at Toi Whakaari. Despite the long hours (a 60-hour week was not unusual), she was exhilarated by the skills and knowledge she acquired during the course.

The students are given the experience of working in a costume workroom in the first and second years of the diploma.

Georgia and her classmates created eighteenth century waistcoats and breeches for a production set in a penal colony in New South Wales in the 1780s.

In the workroom, the students work in a bespoke manner – each person making a garment for one person. Occasionally, the students could be working together creating different versions of a dress for one actor. A flashback in the 2013 production of Earthquakes in London required a black and white version of a coloured dress.

The students were also taught accurate fabric dyeing to ensure that the colours they produce are reproducible. Georgia discovered how important mathematics and chemistry knowledge is to ensuring a quality outcome. The cloth, dye, and fixative all need to be weighed and a formula followed to achieve the same colour for each batch. To achieve the best colour and one that is also colour fast, the correct dyes and fixatives need to be chosen to match the properties of the cloth.

For their final project, the students dyed and finished three metres of fabric.

Georgia chose to use her dyed fabric in the machinist’s skills project, which was a full Elizabethan gown with corsetry and undergarments.

In the machinists skills project, students practice and learn about corset making, creating shapes with petticoats, sewing in straight and curved lines, and general construction techniques. The completed garment is shown off in a three-minute show that the students choreograph to music.

The students learnt how to distress garments so that they look old and as if the characters have lived in them.

Different distressing techniques are often used for garments designed for film and for theatre productions. In theatre, the distressing can be reapplied overnight between performances and it is less important that the garment is identical. But the distressing applied to garments for film productions is required to last the length of the filming.

The students learnt pattern drafting from basic blocks and then used this knowledge to interpret an image in a pattern. The garment they made from this pattern was shown at the end of the year in another three-minute production. These garments are added to the Toi Whakaari wardrobe collection.

Making headgear and other accessories 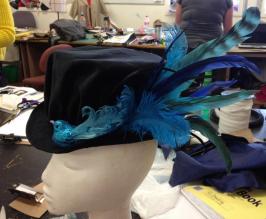 During this part of the course, Georgia learnt to make hats using buckram and wire and other millinery techniques. Buckram is a type of fabric used by hat makers to shape the hat using a hat block. The students were required to create several types of Elizabethan headgear.

I particularly liked this aspect of the course, as it was a small garment that could be quickly realised and allowed for lots of creativity.

During the programme, other work on headgear included mask making and creating a felt cloche.

In the second year, the students are taught tailoring. Georgia created a tailored jacket for herself. The jacket is made from an 80% wool blend and includes horsehair lining, pad stitching, a full lining, and welt pockets. The project included pattern drafting and was completed over 2 terms – about 12 weeks.

During this time, Georgia kept a record of her progress using a blog titled Deviantart. She shared this blog with family members and found it an effective project management tool.

It kept me honest because I had to show them I was making regular progress!

In the second year of study, the students focus on a major project that runs throughout the year.

Georgia chose to create a costume, including all of the accessories, for a “Madame Pompadour” character. Madame Pompadour was the chief mistress of Louis XV in the 1700’s.

The students start with an image of a garment. Georgia chose Madame de Pompadour at her Dressing Table by François Boucher and translated this into a complete outfit. 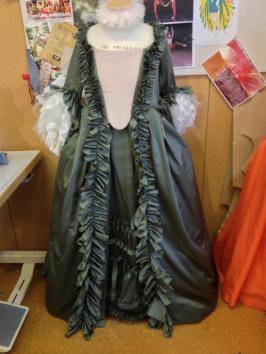 For this project, she had to research the era, create patterns for the garment and accessories, construct these, and find a model to show it in a final presentation.

Georgia’s costume included panniers and side hoops – undergarments worn during this time to extend the width of the skirts at the side while leaving the front and back relatively flat. Typical of the style of this era, the dress had a flat front including boning.

Georgia was pleased with the outcome:

The costume looked stunning on stage – the model had reddish-brown hair and the main fabric was green polycotton sateen – a fabric usually used for lining. It hung like real silk ...  The fabric, despite being inexpensive, really captured the look that would be expected of the King’s mistress.

Early on in her course, Georgia recognised the value of the prior learning she had from her secondary technology education. She was familiar with the technological process and with considering the full range of stakeholders within the socio-cultural context of a project.

She thinks that reflective practice is the key to successful practice for all technologists:

As long as you learn from your mistakes and move on ... I think that this is one of my key learnings.

Georgia considers that the way they were systematically taught about both the techniques to use in garment construction and why to use them provided a strong base to step up to the next level required in the costume design course.

Georgia is going to England early next year. She plans to work in any position she can in a theatre company, hoping to eventually secure work in costume construction.

A WOW costume inspired by a longhorn beetle
Maia Holder-Monk created an exciting and original WOW costume for the Te Papa windows in the 2013 WOW festival.