A bit on the side 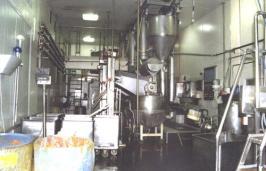 For a large food manufacturer with an established market and reputation, new products are vital part of a dynamic strategy for growth. Wattie Industries was built up over about 30 years to become the largest food-processing company in New Zealand, with a substantial export business. Its products included canned and frozen lines, and it held a major market share with a solid customer base. After various reorganisations over quite some years, the firm was bought by the international US company HJ Heinz. Now trading under the name Heinz Wattie's Ltd, it has become an important part of their international production resource, with particular emphasis on the Australian and Japanese export markets.

Located over three sites in Hastings, Heinz Wattie's employs about 1800 people at peak. As an indication of the scale of its operations, each year it produces about 40,000 tonnes of canned soups, baked beans and spaghetti for Heinz Australia, and about 200,000 in all. It operates the largest hydrostatic cooker in the world, and the current canned food production rate is about half a billion units per year.

A major driver of growth at present is the Japanese market. About NZ$100 million has been spent on the plant in the last five years, much of it on sorting and handling equipment, some on up-to-date processing facilities. There is a product development team of more than 40 people on site, looking for new consumer food products suitable for selected international markets. One new product chosen was a speciality line of variety sauces, the subject of this case study.