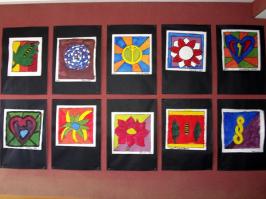 Each intermediate class had six ten-hour technology rotations, three in the first half of the year and three in the second.

There were two rotations of materials and art. Processed food in term 1 or 2 was followed by materials – fabrics in term 3 or 4. The client schools had four-day sessions every term (two days in each of two consecutive weeks).

The first year saw the introduction of a whole-team programme of learning focused on technological practice.

Regardless of which module students might take as an option in term 4, they would be assessed on technological practice as a whole. By mid-year teachers could see that students were bringing their knowledge of brief development, learnt in a previous context, through to their new technology rotation and could apply it there.

The team agreed that they would work with students up to level 3 although Ministry guidelines state that year 8 students should finish the year having achieved level 4 and that year 7s should be working towards level 4.  They wrote their rubric (PDF) to reflect their decision. This was partly because the year 8s hadn't had the benefit, in year 7, of their teachers' professional development. Also the year 7s entering the school had very little context-specific teaching of technology and didn't have the requisite language. Teachers often spend the first few year 7 rotations in catch-up to bring their students up through levels 1 and 2.

The introduction of one technology workbook was an essential strategy in creating student understanding of technology as a whole rather than as disparate subjects. In previous years students had a different workbook for each technology area. Now the students used one technology book (visual diary) which was kept at school, to ensure it was available when needed. The team developed a Technological practice glossary (PDF) which was pasted in the front of the workbook. In each rotation students were given another glossary of context-specific words. This was placed near the technological practice glossary so that they could see the connections between each area. The collective workbook also served as another way of reinforcing a sense of cohesion between the teachers.

As students did their technology rotations, they were given the same templates to write in – for example, in term 1 when everyone was focussing on brief development every student pasted the Attributes (PDF) and Fit for purpose (PDF) templates in their books. The team also developed a Technology practice poster (PDF). This poster showed the three components in a circle. A copy of the poster was put into every book. Parts of the circle could be printed separately so that teachers could put the brief development section on their walls. In term 2  they replaced it to show two components.

A drawback of the workbook system was that parents wouldn't see them until the end of the year, unless they attended parent-teacher meetings. The teachers recognised that parents might not easily understand the terminology of technology and that many still thought of it in terms of the traditional manual programme.

Parents who gave feedback on the workbooks were positive. They commented that it helped them understand the process.

Another strategy for promoting technology as a unified subject covering different areas of practice was the establishment of a school technology blog. This gave parents an insight into what is happening in technology today and what the terminology means in practice. The blog emphasised that the same processes are used in each class along with subject-specific skills and knowledge.

The team also had to communicate their new programme to the client schools and their parents. They adapted their client school technology booklet to include an explanation of the team's PLD and the components they would cover over the year. 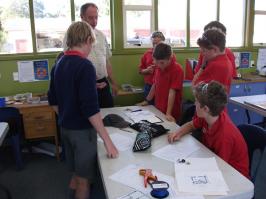 Richard is enthusiastic about teaching digital outcomes – electronics. He notes that everyone is capable of gaining some understanding of it. He has tried to make it accessible to a wider range of students through fun to help them to grasp the basics. Visitors to his classroom might observe students running around the room and jumping over chairs. This apparent disorder helps the students understand the idea of circuits, and remember it! "They are the electrons, with the conventional current moving from positive to negative. What are we doing when we jump over a chair? It represents a bulb, for example, that is using some energy and then we can demonstrate the concept of circuits in parallel with two chairs. And to represent the moving electrons they'll bump each other along."

Richard also runs a three-session (4.5 hours in total) extension digital outcomes – electronics course with seven students at a time. The short time limits what he can achieve with the students. The students are able to develop outcomes such as transmitters and key lights and some students will take it further. "Assuming they've got some basics from the modules programme, I drive them forward very quickly. They don't get huge explanations and I expect that they're going to grasp a lot of the concepts and drive themselves really, with me just facilitating." 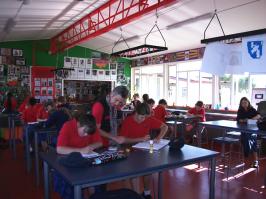 The students in Sue's art technology programme learn specific skills and knowledge from the art learning area and work through the technological process. The year 7 art programme included learning about the elements of art, drawing, painting, colour, and design skills. The students then designed and constructed 3D papier mache novelty clocks. The year 8 students revisited their year 7 learning then focus on applying the principles of art within their printmaking. They learnt the processes involved in both stencilled and lino-reduction printmaking. "Seeing an outcome right through and perhaps taking it a bit further. And it's not as though we've had to make art fit into technology, it does fit." 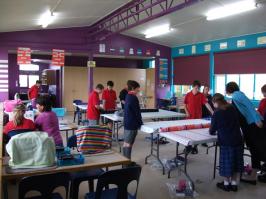 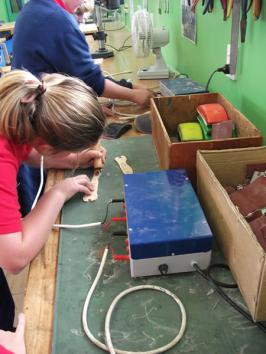 Russell looked at how he could incorporate functional modelling and design into his programme. He trialled a year 7 unit in which the whole class made salad servers. He says that although the students were all working on the same problem-solving aspects, they were introducing their own designs. "I saw it as a good vehicle for teaching technology and teaching them how to think. What they're learning with me, they can take out and apply in the real world. It's not just knowledge and making a product but more the learning that's happening, so that their product evolves and becomes something functional".

Some year 8 students developed cup trays which, due to timber limitations, were a standard length but they were able to design their own handles. During this process they made sketches, card templates, and functional models of their handle to create a tray convenient for carrying cups around. Other year 8 classes worked on developing pewter jewellery and a wooden jewellery box.

By the end of the year, the team felt they had made great progress in implementing the learning area and The New Zealand Curriculum. They could easily tweak material to suit their specific teaching areas. They agreed the changes had resulted in a high level of student pick-up and success, reflected in the positive changes in student work across all the classrooms.