Karamu High School putting the resources to use 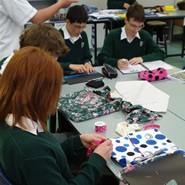 The year 9 programme at Karamu High School was made up of four programmes of learning –  two in designing and developing materials outcomes (resistant and textiles), designing and developing processed outcomes (food technology) and digital outcomes. Students do each for three hours a week. However, in the past, timetabling constraints had meant that some students couldn't do a programme of learning in one particular term, and had to make it up by doing two programmes of learning in another. 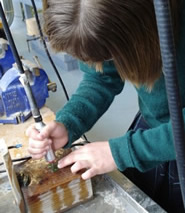 Timetable changes resulted in each year 9 class having one programme of learning per term. The department had an opportunity to re-organise the programme to ensure better continuity between the four programmes of learning.

"We had been operating as four separate areas and although we now had the chance to make better links between the areas we weren't sure how it could be done. Seeing the way Havelock had developed their technology cycle and were adding to it each term was of real interest to us. We had a similar cycle but we were just reinforcing it again and again in each of the programmes of learning."

Dale and his staff were impressed with the way the structure of the Havelock North year 9 programme promoted student progression, and how this progression was assessed and reported on. It convinced them that it would be possible to restructure their own programme along similar lines.

"Having access to the resources really cut down on the work we had to do – particularly with the assessment schedules. It gave us a very clear idea of the overall assessment picture and how we could set it up and report on it."

Enthused, Dale drafted possible structures for the year 9 technology programme at Karamu and presented them to the others in the department for discussion.

"It was great to be able to take the material and quickly adapt it to meet our needs – there was no need to go back and re-invent any wheels. We worked through it over a series of meetings during term 4 and ended up getting buy-in to the agreed structural changes from the whole department."

With some fine-tuning in the week before the start of the new school year, the programme was ready for implementation. Half way through the year, Dale was happy with the success achieved. "Staff have been very pleased with it and the resources we designed have been well used by all teachers. Different teachers have used them in slightly different ways, but it's meant that all students have been getting the same background information, which is then taken through and developed by their next teacher."

"This consistency in approach has given students an understanding that technology is one broad subject rather than a collection of different areas. And it's really helped in our reporting of student progression – we're now reporting less, but giving more meaningful information."

One year on, Dale reflected back on the importance of an initial presentation by the Havelock North staff. "It was good to have teachers standing up and showing what they had achieved, and to have a range of teachers presenting. They all gave a slightly different slant on the process, which was useful, but there was a real team involvement. It was obvious that their whole department had been involved in the development process. That presentation clearly showed how different technological areas were all following the same process, and convinced us that we could do something similar."