Tairawhiti secondary schools and Eastern Institute of Technology (EIT) have partnered to form a trades academy that introduces students to a wider range of vocational pathways.

The schools involved in the partnership with EIT have noted many benefits for the students enrolled in the academy, including:

The Tairawhiti/East Coast region is home to 11 secondary schools and area schools, including kura kaupapa Māori. Some schools are very isolated, connected only by winding coastal roads.

The isolation of the region can mean that some young people have limited understanding of the range of opportunities that might be available to them. And due to their location, and (often) small size, schools may be limited in the range of courses they can offer.

In these circumstances, the establishment of the Tairawhiti Schools Trades Academy @ EIT was a very welcome move (even though the more isolated schools and their students still have to overcome distance barriers if they are to benefit from it).

In 2011, EIT convened a hui at Lytton High School to discuss the concept of a trades academy for the students of schools in the Gisborne region. 10 of the 11 secondary schools, area schools, and kura in the region participated.

The name, Tairawhiti Schools Academy @ EIT, was chosen to convey the message that the EIT facilitates the academy on behalf of schools.

Following consultation, four courses were offered: integrated trades, automotive, hair and beauty services, and hospitality. EIT then visited each of the schools to outline details of the four courses to be offered. All would run on Fridays at EIT’s Gisborne campus. 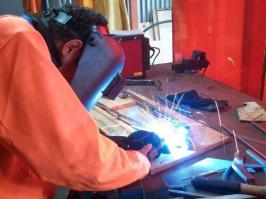 The first students enrolled in 2012. The Ministry had originally allocated 50 places, but the response from Ngāti Porou communities and schools was such that this was increased to 105.

To ensure good communication with schools, EIT established a single point of contact, and the departments providing the academy courses report to the academy team instead of their subject teams. Manager Paul Hursthouse says:

It was important that we were communicating with each other about this initiative rather than having to go back through multiple teams.

The intention is to make each programme as practical and as engaging as possible. We asked ourselves what could we offer in terms of a well constructed, integrated course, through which students could achieve unit standard credits that would count towards their NCEA.

The target is year 12 students, but some schools have requested access for year 11 students. Schools in more isolated areas have also asked us to take some year 13 students to give them greater curriculum choice and exposure to vocational pathways. All courses offer pathways into tertiary training. 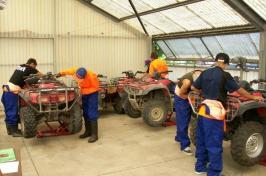 EIT assesses academy students against ITO unit standards – most are level 2, but a few are levels 1 and 3. NZQA policy requires that EIT report results to schools, which then report them to NZQA.

The integrated trade skills course has three components: carpentry, mechanical engineering, and automotive assembly. For the carpentry component, the students work on a small building such as a playhouse or shed. For the mechanical engineering and automotive assembly components, they make a mini motorbike that is raced in the New Zealand Secondary Schools National competition held at Manfield each year.

A separate automotive programme is offered for students who are interested in a career in automotive engineering. EIT has formed a partnership with Hastings and Gisborne Honda (HGH), who provide the projects for this course. HGH supply farm bikes that require a manageable amount of repair, and students take these apart, fix them, and reassemble them. HGH provides parts and some supervision and then sells the repaired bike on behalf of EIT.

Concerns about competing with schools

Aspects of the trade skills course did overlap with what some schools were already doing. For example, staff in the Technology department at Lytton High School had been part of the team that had originally set up the mini motorbike project and national competition. 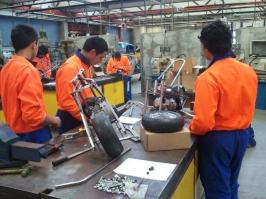 However, concern that the academy would be competing for their students was allayed by subsequent consultation.

We couldn’t cater for everyone. If the school already had a successful programme, students should remain in it. We made sure schools understood that we were not here to make a competing product, but to provide additional education opportunities.

To enrol in the academy, students must want to participate and have the support of parents and school. The Ministry provides funding for their travel to Gisborne each Friday.

The academy works to make the students feel welcome. The pastoral care support person greets them on arrival, and any absentees are followed up.

In response to feedback from schools, EIT has now extended the range of academy programmes to include carpentry, sport and recreation, and agricultural courses.

Where possible, students in the year-long carpentry programme work on community projects. This year, one significant project has been renovating the Operatic Society building in Gisborne. The Historic Places Act protects aspects of this building, including the frontage. Academy students water-blasted, sanded, repaired, and painted the woodwork on the frontage. They also replaced some of the mouldings and repaired leaks in the roof. The Gisborne Cadet Unit (which leases the building) and the Masonic Lodge (owners of the building) supplied materials.

Paul says that the academy is not a “panacea for all ills”, but:

Schools are saying that they are seeing students who were struggling to engage returning to school with increased pride and motivation – and wanting to make a greater contribution to the school community.

82% of enrolled students are Māori. An analysis of achievement in 2012 revealed no difference between Māori and New Zealand European achievement, and no clear correlation between school decile and achievement.

Success is measured not only in credits earned, but also in the increased clarity that students are gaining about future vocational pathways. Many discover that the options are much broader than they had thought. Increased numbers are planning on enrolling in tertiary education, and some who were contemplating leaving school during or at the end of year 12 are now choosing to return for year 13.

Having had a taste of what is available, students come back for more. For example, a year 11 student from Ruatoria enjoyed the carpentry component of the trade skills course so much that he enrolled the next year in the carpentry programme.

According to feedback from principals, the benefits of academy enrolment include:

Tolaga Bay area school has 36 students in year 12 and year 13 – and 28 of these students attend the academy. Principal Nori Parata says:

“The academy has both educational and social benefits for our students. We would never be able to offer the choices on site that are available at the Academy.

The students are keen to go to the Academy. It gives them a feeling of being grown up and adds to their level of maturity. It’s a good transition between secondary and tertiary in a supportive environment. Ngāti Porou schools on the coast made a commitment to support EIT in this initiative so all students now go to the EIT Schools Trades Academy.

90% of our students go on to tertiary pathways or employment. A large number of our students went on to EIT Hawkes Bay last year, as they felt more familiar with this tertiary provider through their experience at the academy.

The Ngāti Porou East Coast schools have undertaken not to have any interschool events on a Friday. The senior students do all of their other subjects on the other four days. We have used Fridays to provide junior leadership opportunities and to offer Star programmes.

As an East Coast school, we face our own set of challenges particularly with the distance and isolation. The five schools on the Coast each make their own arrangements for transport. We all send a teacher with the students as we can’t send them these distances without supervision. We are working through this issue currently with the Ministry as we do lose funding by sending the students to the academy. We are lucky in that we can get the students back in time to connect with the other buses. This is not the case with the other schools.

The regular communication from Paul Hursthouse and his efforts to seek feedback have helped a great deal with establishing an effective working partnership for this initiative. EIT is trying to address one of the most isolated communities in New Zealand.

We have recently talked about small rural schools collectively forming a class for achievement standard programmes. I welcome this opportunity to look at the school–tertiary interface and come up with a blended model that offers greater student choice.

We also look forward to having ultrafast broadband in the school. We can see that this will reduce our isolation and offer possibilities for increased collaboration in education.”

Campion College is located in Gisborne. Sue Peard manages the Gateways programme and is careers advisor at the school. She says:

“Campion College currently has 12 students in the academy – seven more than in 2012.

We do not have the facilities to deliver engineering, automotive, catering, or hairdressing courses, so the academy has increased opportunities for our students.

Also, the academy gives students who might otherwise have left school the chance to re-engage in education. Several academy participants returned to school this year as year 13s to pursue career interests.

Some of our students are participating in the Gateway initiative and also attending the academy. This can be a very effective combination.

A highlight of this year has been to see the engagement of a special needs student enrolled in the automotive course. Collaboration between EIT, the school, and the student’s family has given him the opportunity to gain valuable experience and possible further educational opportunities. His dad is an active participant and often meets up with him for lunch.

The academy has shown flexibility and understanding by allowing students who have left school to continue with their academy programmes.

Students are increasingly recognising the need for qualifications. By observing full-time students working on projects (for example, students on the full-time carpentry course building a house), our students can visualise a pathway between their current academy programme and future full-time tertiary training.

The school currently has the flexibility on Fridays to allow students to participate in other educational opportunities. Students rarely miss academy days.

The partnership with EIT has been great. Communication is very good and we can visit the polytechnic at any time to see our students at work. Their progress is reported on regularly and, where there are problems, EIT staff try to find solutions that work best for the students.  For example, when the family of one of our students moved out of the area, EIT was proactive in trying to transfer the student to a similar programme in another polytechnic. This is testament to the effective partnership between the school and EIT.”

Tairawhiti schools would like more academy places, but need to negotiate this with the Ministry of Education.

Some students walk substantial distances to catch the academy bus because the regular school bus will not get them to school in time to make the connection. EIT is looking to discuss options with the Ministry.

Tertiary providers and schools are beginning to have wide ranging conversations with Ministry Youth Guarantee people about curriculum and programmes for 16–18 year olds – exploring what a coherent, integrated programme that addresses key competencies, other curriculum areas (English, mathematics, science), discipline knowledge, and industry-related knowledge might look like.

EIT are trying to be proactive in all of this, and to design courses that are linked to the vocational pathways. Paul says:

We try and advocate for schools as equal partners. They find this refreshing, as we are trying to create solutions with them rather than impose solutions on them.