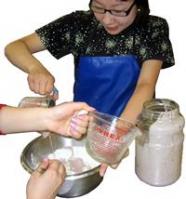 No, it's not Dr Seuss or St Patrick's Day, but Food Technology at Wellington High School. Amy took the green bread discovered and developed by students in previous years and worked on a mass production plan for Breadcraft (Wai) Ltd in Masterton.

Amy reviewed existing rewena recipes and experimented with different varieties of starches which she then used in baking bread. However she needed to use urenika to obtain the green colour in the bread, so also trialled rewena made with this Māori potato.

A visit to a local bakery allowed Amy to compare commercial techniques with her own. She then went on to conduct some food science experiments – the use of raising agents, working with yeast, gluten development and the Maillard Reaction.

Amy built up a network of scientists willing to confer with her and support her project. These included Dr Robert Lau of Massey University, who advised on leavening and recommended experiments on potato leavening. She also researched wild yeasts used in making sourdough bread and how their use could affect the bread and its commercial manufacture.

Bread before entering the oven.

She then visited Kapiti Fine Foods to learn about pathogen management, which she applied to her process, swabbing the rewena and testing for any pathogens that might be present.

Amy conducted shelf-life testing, to ensure her product would be commercially viable. She wrapped a sliced loaf in plastic, kept it at room temperature and tested daily over 14 days for fungi and mould growth. At the same time she tested a loaf from the same batch for colour deterioration, checking each day for ten days. She found that the colour noticeably reduced overnight and by the fourth day was unacceptable.

Amy took her completed proposal to Breadcraft, which produced a 25kg batch of her bread for sale.

"Working with Amy has been an exciting journey. Amy is a self-motivated student with an inquiring mind. She does not get discouraged by barriers, but sees them as opportunities to explore other means to reach her goal. The way in which she upheld a working relationship with her stakeholders is to be commended. Amy fully utilised the support provided by industry and other secondary stakeholders".