Year 12 students Kate and Estelle worked on a one year project that teacher Carolyn Norquay had entered in the NZIFST Student Product Development Challenge run by Massey University and Crest. Working with Food Technologist Shelley Banham, from Griffin's Foods Ltd, and Futureintech facilitator Gay Watson, the class was to develop and produce to prototype stage a range of biscuits for the teenage market. The challenge was that these prototype biscuits had to be able to be processed on the manufacturing set-up of Line 3 at Griffin's plant. 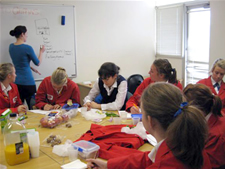 "It was a unique situation where we got to work closely with Shelley Banham from Griffin's," says Estelle. "We learnt a lot about matching our product in our kitchen at school to the various checkpoints and methods of the Griffin's production line."

Carolyn ensured that the students were well prepared for the project. "We did the research phase really thoroughly. We looked at published research studies to try to give the students ideas about how to use research data to identify their market – that whole who, what, why, when, and how business. We looked at teenagers and tried to define who they were and why they were different."

The girls then conducted market and consumer research and found that teenagers preferred a large (7–8cm) single-serve biscuit. "We then did a supermarket analysis to see if there were any biscuits like this for teenagers on the market, and there weren't. We also did some research into why teenagers like certain products."

The students then went through the Griffin's factory and had a good look at Line 3 and found out what it is capable of doing.

"We then came up with an issue, went through our research to find the main factors what were likely to affect the outcome of the project and wrote our initial brief," says one of the girls. They then came up with some concepts, evaluated them against the brief and selected their two biscuits.

"They started with the idea that teenagers like excitement, challenges, and taking risks," says Carolyn. "Kate came up with an interesting filling – a sort of sherbetty thing that she wanted to make the biscuit really zingy. They spent a lot of time playing around to try to get it right, but in the end they couldn't get what they wanted so got some help from Shelley."

After getting stakeholder feedback on their concepts, the two girls tested and trialled their products, which ended up stretching their problem-solving abilities to the limits.

"Originally the biscuit dough was causing a lot of problems, because as soon as you start altering ingredients all sorts of unexpected things can happen. Shelley had given us a video from Griffin's that showed making a crispy biscuit, a puffy biscuit, and a chewy biscuit. This gave students an idea about the different ingredients and what they did to the biscuit, and they tried to play around with those. But in the end they ran out of time and went back to the Griffin's recipe which they knew worked," says Carolyn. "One of the problems they came across was trying to make sure that all the dough was the same height and the biscuits were a uniform shape. They started 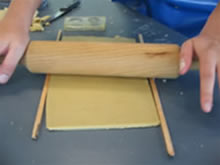 Biscuit dough being rolled out.

off by trying to use a tape measure to check the height, but worked out that by putting two 4mm sticks on either side of the dough and rolling the rolling pin over the two sticks, all the dough remained at the required 4mm height."

Estelle decided to make her biscuit in the shape of an iPod, and worked with her father to make a cookie cutter. "There is one rectangle which cuts out the main bit, and originally I had two separate bits to cut out the screen and the clicker," says Estelle. But Estelle and her dad managed to make a new cutter which cut out the screen and the clicker at the same time. "That made sure that the distance between the clicker and the screen would be the same each time." 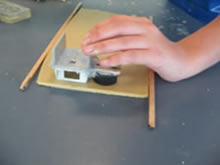 Because of the flexible fragile nature of the dough there was another set of problems moving the dough onto the tray after it had been cut. The girls decided to try rolling the dough and then cutting the dough out on baking paper and removing the excess dough. This meant that the dough didn't have to be moved around to be put on the tray before going into the oven – so the biscuit stayed the same shape. 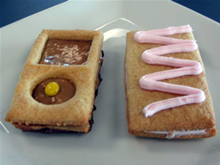 "Having developed a prototype as close to a manufactured product as they could, they did a final sensory evaluation in preparation for a final visit from Griffin's staff. The marketing people from Griffin's came right at the end of the year and looked at all the students' biscuits and gave them wonderful feedback," says Carolyn.