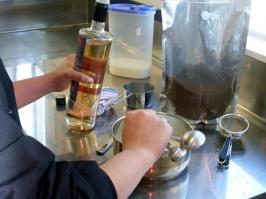 As part of the Young Enterprise Scheme (YES), a team of Fielding High School students (members of the Year 13 Food Technology class) created a company, Caffeinate Me, to develop a coffee-based, ready-to-drink, cold beverage for the Mojo Coffee chain that used environmentally friendly business practices as a selling point.

At the start of the year, teacher Bronwen Beaver introduced the issue to the students explaining that the team's final product, including packaging and promotional materials, was to be completed for the YES Trade Fair in August, where it would be sold to the public at a stall run by the team.

The students' first move was to create the Caffeinate Me company, with each team member directors of different areas of the product's development. Hannah Simonsen led the team as Managing Director and assisted with production, Chrissy Way focused on finance and marketing, and Shiela Mae Bulado on communication and sales.

The students then visited the Mojo coffee factory to meet their client, get detailed information on the brief, and learn more about Mojo's business philosophy. An important aspect that the team took away from this session was Mojo's commitment to environmentally-friendly business practices, which specified the use of organic milk as well as sustainable and/or recyclable packaging.

On the market side of things, Mojo explained that there was a space in their existing franchise for a ready-to-drink, takeaway coffee beverage "that could be consumed anywhere, any day, and anytime".

The students then created a list of specifications and key factors such as the use of organic milk, Mojo-supplied coffee, recyclable bottles, and a shelf life of at least 14 days. The product also had to be of similar value to other products on the market while maintaining a healthy profit margin to be economically, as well as environmentally, sustainable.

The team then researched existing products, to get an idea on what was selling, how much it cost, and where there might be opportunities in the market. A survey was also developed and handed out to the public at a local farmers' market to get an idea on the types of products people would be interested in trying. This informed a brainstorming session to determine potential products – these included quick, easy breakfast substitutes with added nutritional value, smoothies, and carbonated coffee drinks, all with the added kick of a shot of coffee as a point of difference.

The students then individually developed and trialled flavours that the public had expressed interest in, such as banana, chocolate, berry, mint, and nut. During this process the team visited Massey University for its annual "D-Day" event where YES teams can get valuable feedback on their product ideas and expert advice from specialists.

This session influenced the team to trial yoghurt as a possible ingredient to increase the nutritional value of their drink, and to contact organic milk producer BioFarm as a potential supplier of quality milk. 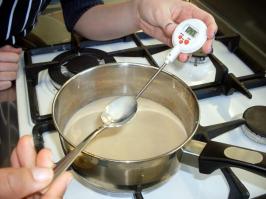 Testing of the product.

Most of the students found their biggest challenge was getting the balance of flavour and coffee right. They found that plunger coffee had far too weak a flavour. An espresso machine improved the coffee's strength but was seen as an inefficient method for mass production in the long term. Organic milk was also finalised as an ingredient as yoghurt produced a sour taste that was difficult to balance out with other ingredients and gave the mix an unappealing pale colour.

Once each team member felt they had produced a prototype recipe that met their personal criteria for taste, smell, and appearance, these were trialled on the public at the Wellington Food Show with a survey for each sample offered.

The chocolate recipe was eventually chosen as it received the most positive response and was the most economical to produce. The team then investigated ways to produce the drink more efficiently in large quantities. The drinking chocolate used in development was too expensive, so the team tried a white chocolate flavouring provided by Mojo, which was cheaper and had a better, more distinctive taste. Experiments were also carried out to produce the coffee solution in the most efficient way, using a large pot with various timings, temperatures, and ratios of water to coffee until the best method was found.

An important specification for packaging was met when the team sourced recyclable glass bottles with screw on aluminium lids from a Wellington supplier. For the labelling of these bottles the team used the product brand name "B Fast" rather than "Caffeinate Me" as they felt this had a healthier association with energy rather than caffeine. A vibrant green was used on the label for its connotations of eco-friendly ideas, and the use of organic milk was displayed prominently as an important selling point, helping to justify a higher price.

The team also researched and complied with the labelling requirements for the back panel, with nutrition and storage information, use-by date, and the company's contact details clearly displayed. 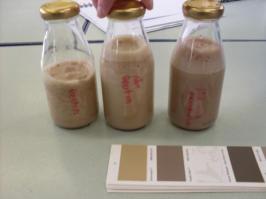 Colour testing of the product.

In order to get the freshest, safest product available to the customers, the team organised the mass production to be the day before the YES trade fair. At the pilot plant (Institute of Food and Human Nutrition, Massey University, Palmerston North), the team followed all standard safety procedures including wearing hairnets and the appropriate clothing. To increase the life of their product the students used a UHT process rather than simple pasteurisation, heating the milk to 135 degrees Celsius for 1-2 seconds then quickly pouring this into the pre-sterilised and chilled bottles before immediately transferring them to a commercial chiller at a nearby supermarket for the following day.

At the trade fair the team made sure their table was as professional as possible. They used a refrigerator to store and display their product, they wore branded polo shirts, and had posters, a backdrop, and a laptop displaying the company's development process as another method of capturing public interest along with prepared tasting samples.

The team felt they more than met their objective and that their careful research and meticulous adherence to the client's specifications helped them to develop a product with genuine market potential.

"Our product has been mass produced very successfully using organic milk and Mojo's own coffee beans and we followed all the New Zealand food regulations and laws throughout that process. The product has a white chocolate flavour that is unique for a coffee product, is ready to drink, and is about the same price as coffee currently sold at Mojo."

All of these aspects contributed to the success of the Caffeinate Me team on the final day of the trade fair.

"It was a long tiring day but we sold most of our products and made a profit. We had samples for people to trial and most people were very positive about it. We came away with a prize for best dressed and second overall company in the competition."