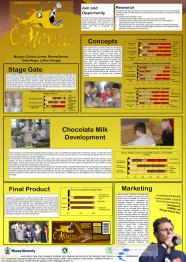 The Challenge requires students to develop a new food product using knowledge and skills from Science and Technology, and to work towards a Team Silver CREST Award as part of their three term project – see What's Expected (.doc, 82kb).

The Wellington High School team was mentored by NZIFST member Eileen Basher who linked the four students with their sponsor, the Diary Industry Association of New Zealand (DIANZ). The team met weekly with teachers Karen Saunders and Marietjie van Schalkwyk to discuss their progress – a reflect/review/revise process – and to learn skills such as how to establish a focus group and carry out sensory evaluation. The students worked with their class at the beginning of the year but by the end of term 1 were concentrating solely on their project, "touching base" with Karen every lesson before heading off to research in the library or trial recipes in the technology room.

Emma, Morgan, Lillian, and Oska first considered the brief given to them by their client, DIANZ, and, from a list of suggestions, chose to develop a dairy-based sports-recovery drink for teenagers to boost their energy levels after school sports and fill the "gap" until dinnertime. They researched food trends and functional foods, identifying a gap in the market for acidified (fruit) milk drinks (AMD), and researched the function of sports drinks and their nutritional requirements. Lillian, Emma, and Morgan decided to develop a fruit milk drink, while Oska designed a chocolate milk drink. They each did a lot of trialling, trying out different ingredients and testing them on their stakeholders before deciding on their final concepts. The banana chocolate milk drink (Oska); tropical AMD (Morgan); peach, raspberry, and passionfruit AMD (Emma); and honey lemon AMD (Lillian) were presented in a formal sensory testing to 30 Wellington High students, who selected the peach, raspberry, and passionfruit as their favourite drink. 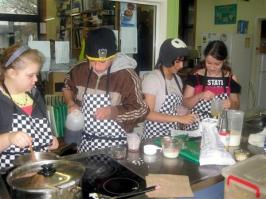 Students working on the energy drink.

After analysing the results of their sensory testing, the team decided to continue development of the raspberry, peach, and passionfruit AMD. They investigated similar products sold in local stores, which they tested with their focus group, using the feedback to trial different kinds of fruit flavourings combined with milk. Throughout the project the team used consumer feedback to inform their development, consulting their stakeholders not only on food but also on aspects such as the company name and the name of their final outcome. They used a classroom pectin kit to work out the best pectin and milk base, and trialled different techniques and ingredients to improve their formula. Despite all their effort, the students hit a stage-gate when, after much testing, they couldn't get a stable product – each time they tested their drink it would have a different colour, texture or taste, or the ingredients would separate. With time an important consideration and the complexity of the variables involved in developing their drink, the team concluded that they needed to stop development at this stage.

Hitting the stage gate was demoralising, but the students brainstormed their options and decided to look at their initial investigations. A review of Oska's research showed that his chocolate milk drink – the second most-preferred in the earlier sensory testing –was actually more effective for sports recovery than a fruit one. So the team decided to develop the chocolate milk concept and, because there are already many chocolate milk drinks on the market, looked at how they could give their product a competitive advantage. None of the chocolate drinks currently available were advertised as sports-recovery drinks, so they focused on developing a drink suitable for that purpose. 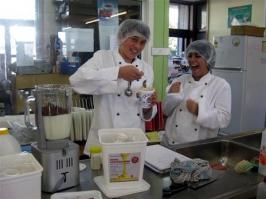 They first disassembled the drink and examined the ingredients, considering how they could improve each component. As the drink was aimed at adolescents they decided to use low-fat milk with added calcium and to fortify it with vitamin D to aid the absorption of the calcium. The team investigated the different kinds of cocoa available and chose a Dutch cocoa, which has a sweeter flavour and, after considering functional foods, decided to use Manuka honey with a 12+ UMF for its taste and health benefits.

In order to promote their product as a sports drink, the team looked at marketing with a sports focus. They decided to take advantage of the media focus on the FIFA World Cup and approach All Whites player Ben Sigmund in the hope that he would endorse their final outcome.

Before testing their drink, the team still had to work out a formula for their concept, looking at how much of each component was needed to get the flavour right for their final recipe. They carried out a lot of taste-testing with stakeholders and then asked a school football team to try the milk. Their feedback was that it tasted good, but lacked the creamy consistency the testers preferred. The team emailed Eileen who suggested they use a stabiliser. Their teachers also referred them to Senior Lecturer Allan Hardacre at Massey University, who recommended various additives they could use, including xanthan gum which the team decided to use because there was a xanthan-gum experiment kit* in the classroom. This additive is very sensitive, so they had to experiment to come up with the quantity needed to get the required viscosity. The group also looked at the issue of storage and designed a label which included instructions on storage time and temperature (they would have liked to use UHT milk but didn't have the resources to do so). 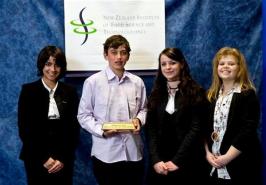 Emma, Oska, Morgan, and Lillian at the awards ceremony.

The students took their drink to a Phoenix Football Club training session where Ben tasted and commented on it. The students were delighted with Ben's endorsement of their product and made some changes to the final recipe from his recommendations. Because they weren't able to catch up with Ben again, the group re-trialled the drink with other stakeholders, along with two other chocolate milk products in order to get a true indication of what people thought. The last task was to choose a name for the drink. After considering stakeholder suggestions and running a survey the team came up with "C-Monster" – a play on Chocolate Monster and Ben's nickname "Sigmund the Sea Monster".